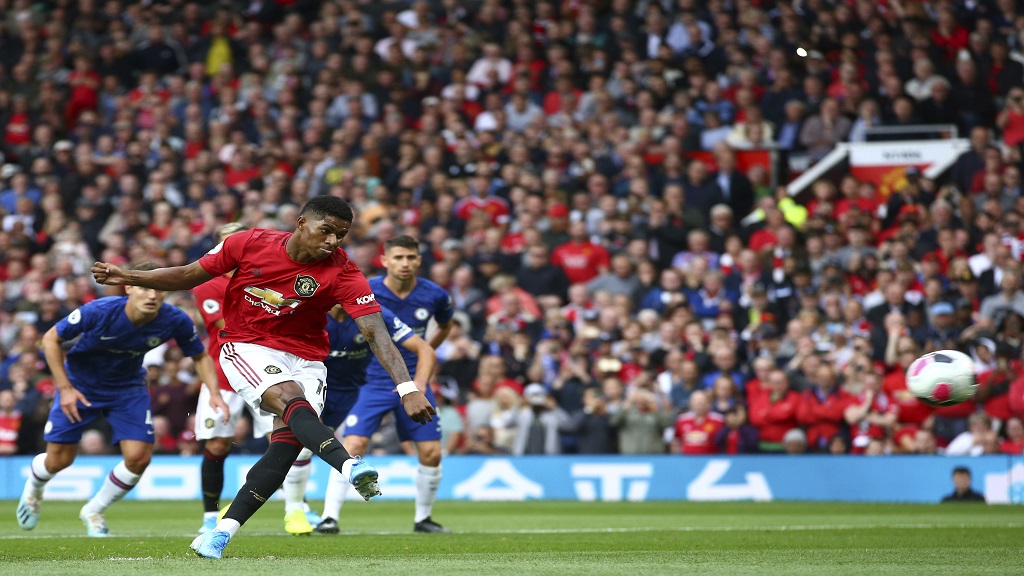 Manchester United beat Chelsea 4-0 to ruin Frank Lampard's debut as a Premier League coach in their season-opening game on Sunday.

Marcus Rashford scored twice, Anthony Martial grabbed another and substitute Daniel James completed the rout on his debut, but it was also an impressive defensive performance from United with the world's most expensive defender, Harry Maguire, playing his role in keeping the visitors at bay.

Maguire, who completed his 80 million pound ($97 million) transfer from Leicester last Monday, played from the start on his United debut.

Chelsea dominated possession, twice hit the post and had more efforts on goal, but the visitors were picked apart by counterattacks with United midfielder Paul Pogba showing his importance to the side with two assists.

Tammy Abraham struck the left post early on for Chelsea, which had Mateo Kovacic involved in the thick of the action early on. The Croat also set up Pedro's effort almost straight afterward.

Chelsea goalkeeper Kepa Arrizabalaga easily gathered Martial's effort after the French winger was gifted the ball by defender Kurt Zouma, whose day was about to get worse.

While Chelsea looked confident, the side had a blow when Zouma brought Rashford down with a clumsy challenge in the 17th. Rashford took his time before sending the resulting penalty to the top left corner.

Momentum switched as Chelsea looked rattled by the setback. Martial continued to probe, having a shot blocked after good work from Pogba.

The visitors recovered toward the end of the half, when Ross Barkley had an effort saved and Emerson was the next to hit the post.

Chelsea maintained its pressure in the second half, when Emerson drew a smart save from David de Gea.

Christian Pulisic came on for his Chelsea debut in the 58th and the American was given a tough welcome to the Premier League when his run was stopped abruptly by Pogba's shoulder.

United defended in numbers, frustrating the visitors' attack, and its second goal started with Maguire at the back after the 26-year-old won the ball from Abraham. Andreas Pereira crossed for Martial to convert from close range in the 65th, and Chelsea was still recovering when Pogba floated the ball over and Rashford went through in the 67th for 3-0.

Pogba set up James to make it 4-0 in the 81st with a deflected shot taking the ball past Kepa.