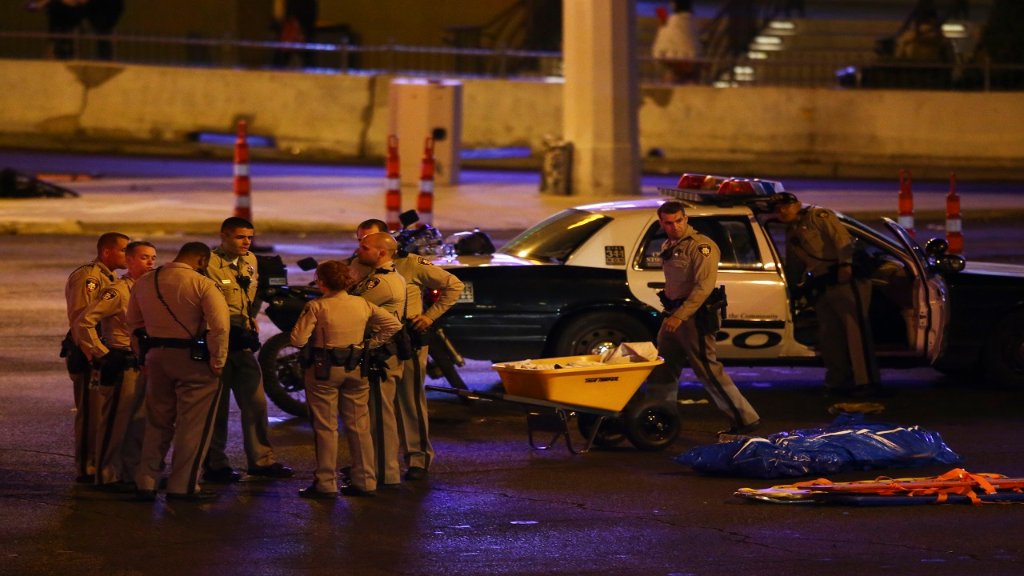 Mike Dempsey never thought he would be a part of a second national tragedy.

On Sept. 11, 2001, Dempsey and thousands of others went to work in the World Trade Center in New York. Dempsey ended up under the point of impact when the second plane hit Tower 2 on that Tuesday morning. He was trampled by the evacuating crowd and was injured, but he survived.

On Oct. 1, 2017, Dempsey, 46, of Raleigh, was at the House of Blues at the Mandalay Bay Resort in Las Vegas when shots rang out from two windows of the hotel, 32 floors above him.

"You're never the same person you were before the event happened," Dempsey said. "The person you are after is a whole new person."

It was the deadliest mass shooting in modern U.S. history. A lone gunman shot and killed 58 people and injured hundreds more at a concert from high above in his suite at the Mandalay Bay hotel.

Dempsey was in Vegas to visit and celebrate with friends. He's a frequent visitor to the area, and always stays at Mandalay Bay.

"It's my home away from home, and it feels violated," Dempsey said. "It's going to feel weird going back."

Dempsey said he'll return to Mandalay Bay, but just like Ground Zero in New York, the place is forever changed for him.

"When I go back downtown now and see the Freedom Tower, it's not the same World Trade Center that I worked in for all those years," Dempsey said. "But there's a new normal you have to find. And I've found the best way to conquer your fears is to face them."

Dempsey said he'll be dealing with the trauma of Vegas for a while, just like he did 16 years ago in New York.

"I'll be looking twice at everyone, because who knows? That guy could have been eating lunch next to me," Dempsey said of the Vegas shooter. "Loud sounds will probably bother me; things are going to change. But I'm trying to get back to normal as much as possible."

For Dempsey, that means coming back to Raleigh to his two daughters, continuing his work as a banking consultant and keeping up with the charitable organizations he's part of that help benefit 9/11 victims and their families.

"Every one of us that went through 9/11 had our own journeys and how we moved forward," Dempsey said. "Every path was different. I chose a path that immersed me in charity work to help the families and survivors."

For 16 years, Dempsey has been part of the Sept. 11 Education Trust and other groups. Now he's looking to help Vegas, too.

"When you go through something like this, you're joined by a common bond," Dempsey said.

He remembers the sound of the gunshots in Vegas, the people screaming. A young man fleeing the concert on the casino floor, wounded.

"Those are images you can't ever get over," he said.

It was chaos and confusion in Vegas, Dempsey said. For 20 minutes or so, no one was sure what was happening. No one knew where the danger was coming from. No one knew how many attackers there were.

"That's what's so different about Vegas compared to 9/11," he said. "Back then I didn't have to worry about what was going on Facebook, the conspiracy theorists and the rumors."

"There was a lot of false news spread about," he said. "People were using words like 'terrorist attack' and 'sniper' but no one really knew."

But Dempsey got home safe and unharmed. Just like 16 years ago, he's dealing with survivor's guilt and trauma from his experiences. But he's trying to move on and thinking of those most affected.

"Maybe God has a plan for me, and I can help," he said. "Instead of being angry or upset, I'm going to try to find what the families and survivors are going to need."

A GoFundMe campaign was started for victims and their families by a county commissioner in Vegas. The campaign had raised nearly $10.5 million as of 6 p.m. Tuesday, eight days after it began. More than 84,000 people have donated so far.

To donate to the Las Vegas victim's fund, go to www.gofundme.com/dr2ks2-las-vegas-victims-fund.

Las Vegas gunman's girlfriend returns to US for questioning