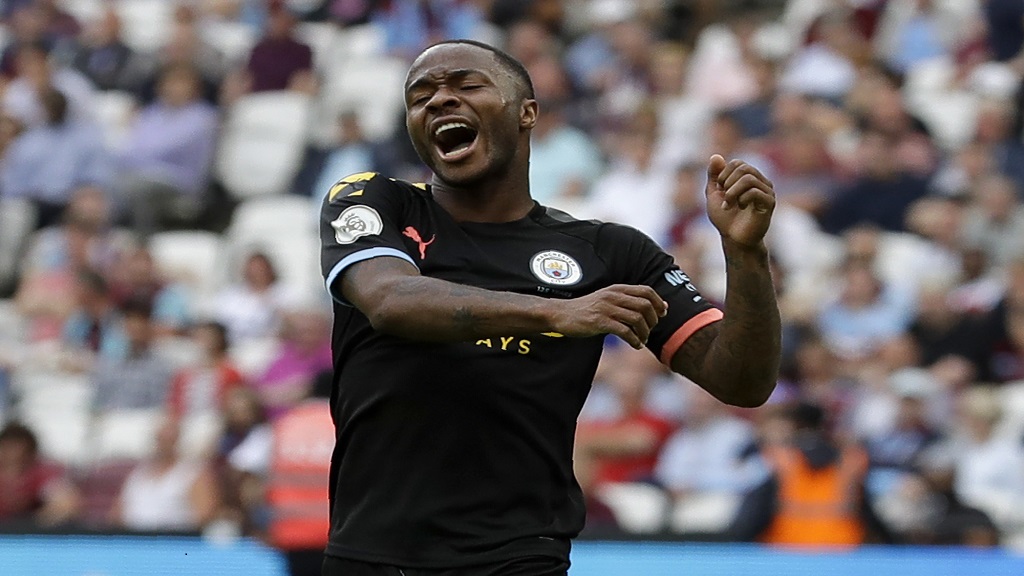 Raheem Sterling scored a hat trick as Manchester City began their bid for a third straight Premier League title with a 5-0 rout at West Ham on Saturday.

Gabriel Jesus opened the scoring and Sergio Aguero added a retaken penalty as City stretched their winning league run to 15 games including last season and delivered a statement to Liverpool, which opened their league campaign with a 4-1 win over Norwich City on Friday.

City, which racked up 98 points to beat Liverpool by a point last season, rarely looked like getting out of second gear with a measured performance at London's Olympic Stadium.

Riyad Mahrez, back in England after leading Algeria to the African Cup of Nations title, had the visitors' first effort in the ninth minute and should have done better again after cutting inside Aaron Cresswell before shooting right of the post.

Jesus broke the deadlock in the 25th minute, converting Kyle Walker's cross from close range after Mahrez had played the England right-back in on the right.

It was only a matter of when City would increase the tempo and make more of its superiority.

Kevin de Bruyne set up Sterling to score through Lukasz Fabianski's legs in the 51st, minutes before Jesus had a well-worked team effort ruled out through VAR for offside. Sterling, played in by David Silva before he crossed for Jesus' tap in, appeared to have his shoulder ahead of the defender.

Ederson was forced to make a double-save from Javier "Chicharito" Hernandez, then Lanzini in West Ham's best phase.

But Sterling grabbed his second in the 75th, timing his run for Mahrez's ball over the top before lifting it over Fabianski, and Aguero was given a second chance to take his penalty after Fabianski saved his first effort. A VAR check showed Declan Rice was encroaching in the penalty area.

Aguero made it 4-0 in the 86th and Sterling wrapped it up in injury time, becoming the first since Didier Drogba in 2010-11 to start with a hat trick on the league's opening weekend.