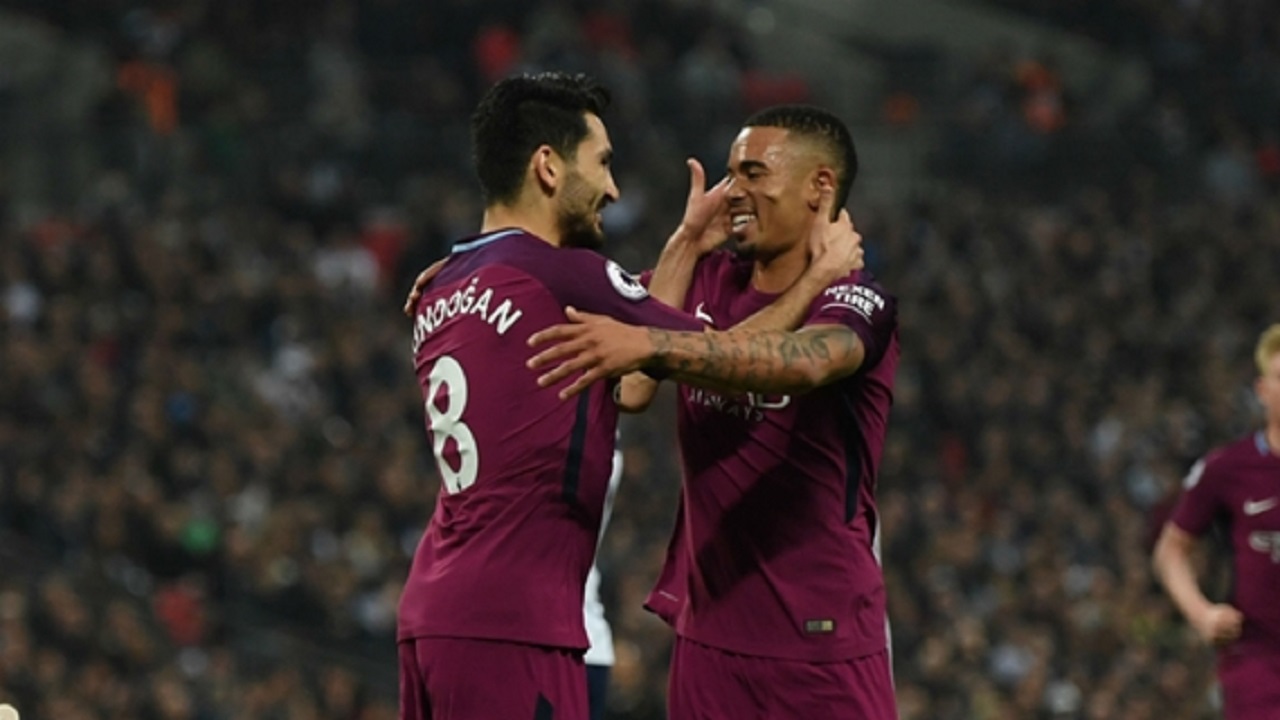 Manchester City avoided a repeat of the second-half collapses that have haunted them this week as they moved to within a win of the English Premier League title with a 3-1 victory at Tottenham.

As in their 3-2 derby defeat to Manchester United last weekend and the confirmation of their Champions League exit against Liverpool on Tuesday, Pep Guardiola's side was close to its scintillating best during the opening exchanges at Wembley and established a 2-0 lead inside 25 minutes.

They held firm under probing Tottenham pressure early in the second half before Sterling rescued his latest scattergun showing in front of goal with a game-sealing strike in the 72nd minute.

City will be crowned champions on Sunday in the unlikely event of rock-bottom West Brom beating Manchester United, but glory will be there's regardless if they beat Swansea City next weekend.

Leroy Sane almost gave City the lead in stunning fashion after four minutes, crashing a back-post volley against the post following Sterling's delivery from the right.

Sterling teed up Gundogan for a shot that was deflected behind in the 19th minute and Spurs barely left their own half for an extended passage of play following the resulting corner.

Just when they appeared to have pushed City back to where they wanted them, Vincent Kompany lifted a raking ball over the top of the home defence and Jesus kept his cool under pressure from Davinson Sanchez to slot home.

Heads did not clear in the home defence and, after Jesus failed to capitalise on the referee's advantage with a second goal, play was brought back for Lloris' indiscretion.

The Tottenham goalkeeper could not atone for his rashness by denying Gundogan, who coolly converted as he did from 12 yards on this ground in the 2013 Champions League final for Borussia Dortmund.

Lloris beat away a rasping David Silva drive in the 33rd minute but City's level dropped markedly before half-time to allow Spurs back into the contest.

Having succeeded in taking a goal off his team-mate this week, Harry Kane cutely played in Eriksen, who enjoyed a slice of luck when Aymeric Laporte's challenge played the ball back against him and it flew past Ederson.

City struggled during the opening stages of the second half, ceding possession regularly to Guardiola' clear irritation.

Tottenham's pressure eased after the hour passed and Jesus should have restored the two-goal cushion, skewing wide on the end of Gundogan's excellent throughball.

Sterling's misses preceded City's fall from grace against United and his was the greatest relief of all when, having inexplicably dallied with the goal at his mercy in the 71st minute, he slammed home the rebound after Lloris brilliantly denied Jesus.

Kevin De Bruyne's majestic volleyed pass gave Sterling the chance to add a second but he skewed wide with Sanchez in close attendance.

Tottenham remain fourth, their advantage over Chelsea in fifth trimmed to seven points by their rivals' comeback from 2-0 down at Southampton - heroics they threatened only briefly to replicate.