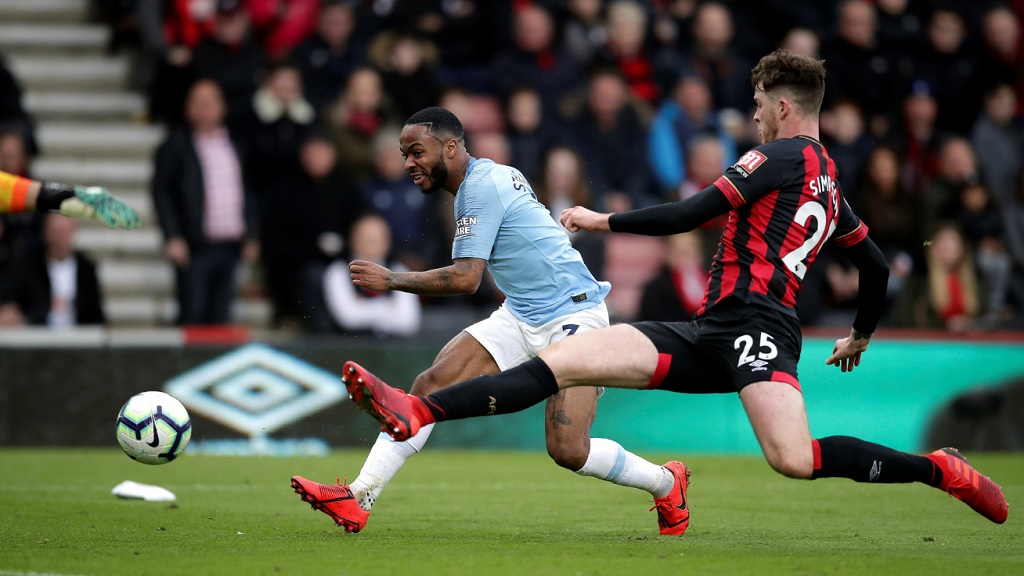 Manchester City returned to the top of the Premier League with a 1-0 win at Bournemouth, but lost Kevin De Bruyne and John Stones to injury on Saturday.

Substitute Riyad Mahrez secured City's fifth straight league win with a low strike early in the second half after coming off the bench to replace De Bruyne, who injured his hamstring as he made a pass.

City moved two points clear of Liverpool, which play Everton in a local derby on Sunday. But victory on the south coast, which was wrapped up without the hosts producing a shot at goal, came at a significant cost to Pep Guardiola's side.

After watching De Bruyne limp off in first-half stoppage time, Guardiola then saw Stones leave the field minutes after the restart on his return after three games out with a groin problem.

It was a fresh setback for Belgium playmaker De Bruyne, who also endured two lengthy lay-offs with knee injuries in the first half of the season.

"Kevin will be out for a while with a muscular problem," said Guardiola, who added that England defender Stones "does not have a big problem."

After a busy period of games that included winning the League Cup last weekend, City at least has a week until its next game — in the league against Watford.

City enjoyed 83 percent possession in the first half but failed to seriously test Bournemouth goalkeeper Artur Boruc. A tame header from Stones was the only attempt on target, with David Silva having side-footed wide when well placed from De Bruyne's pull-back.

With a host of injuries and record signing Jefferson Lerma completing a suspension, Bournemouth manager Eddie Howe selected a makeshift team that included academy graduate Jack Simpson — for just his second top-flight start — in a 5-4-1 formation.

After holding out in the first half, Bournemouth conceded in the 55th minute. The ball broke for David Silva in the penalty box and he quickly shifted it to the right for Mahrez to poke his first top-flight goal since Dec. 4 past Boruc at the near post.

Bournemouth had conceded 30 goals in their previous 10 games against top-six opposition this season and would have lost by a far bigger margin had it not been for Boruc.

Raheem Sterling, who scored 10 times in his previous eight games against the Cherries, was twice denied by the veteran Polish keeper when through on goal, while Mahrez had a close-range header pushed away.

"We made one of the best performances we have played," said Guardiola. "They were very organized but they didn't have one shot.

"We demand a lot of the players without giving them the time to rest physiologically, that is why it is incredible. No matter what happens this season they deserve my admiration."