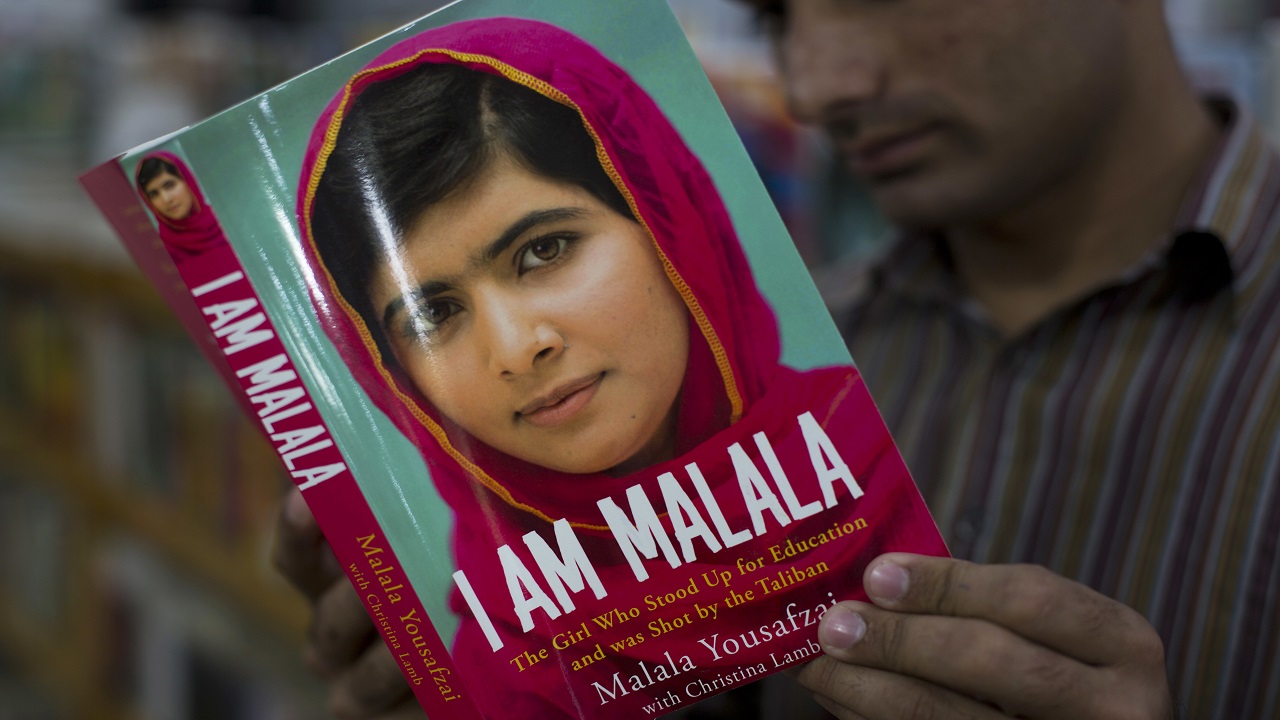 (Image: AP: A man reads the book written by Malala Yousafzai in Islamabad on 10 October 2014)

Nobel Peace Prize winner Malala Yousafzai on Thursday said she was excited to be back in Pakistan for the first time since she was shot in 2012 by Taliban militants angered at her championing of education for girls.

Yousafzai said in a brief speech at a ceremony at Prime Minister Shahid Khaqan Abbasi's office that she will continue to campaign for the education of girls and asked Pakistanis to be united on issues like providing better health care and education.

She said she remembered having to leave Pakistan for treatment after she was attacked. Covering her tear-filled eyes with her hands, Yousafzai said it was hard to wait for more than five years to return home. "It is now actually happening and I am here," she said.

Abbasi praised Yousafzai for her sacrifices and role in the promotion of girls' education. He said he was happy to welcome her home, where he said terrorism has been eliminated.

Since her attack and recovery, Yousafzai has led the "Malala Fund", which she said has invested $6 million in schools and to provide books and uniforms for schoolchildren.

"For the betterment of Pakistan, it is necessary to educate girls and empower women," she said.

'I wish I could see her'

Earlier, tight security greeted the now-20-year-old university student upon her arrival at Pakistan's Benazir Bhutto International Airport. Her return had been shrouded in secrecy and she was not likely to travel to her hometown of Mingora in the Swat valley, where the shooting occurred.

As news broke about Yousafzai's arrival, many of her fellow Pakistanis welcomed her.

Mohammad Hassan, one of Yousafzai's cousins in the northwestern town of Mingora, said it was one of the happiest days of his life. He said he was not sure whether Yousafzai will visit her home town, where schoolchildren were jubilant on her return, though they wished Yousafzai had visited Mingora so that they could greet her.

Javeria Khan, a 12-year-old schoolgirl in Yousafzai's hometown, said she was excited about Yousafzai's return. "I wish I could see her in Swat. I wish she had come here, but we welcome her," she said, as she sat among schoolchildren.

Yousafzai was just 14 years old but already known for her activism when Taliban gunman boarded the school van in which she was sitting and demanded to know "who is Malala?" before shooting her in the head. Two of her classmates were also injured. In critical condition, Yousafzai was flown to the garrison city of Rawalpindi before being airlifted to Birmingham in Britain.

She has since spoken at the United Nations, mesmerizing the world with her eloquence and her unrelenting commitment to the promotion of girls' education through the Malala Fund, a book, meetings with refugees and other activism.

She was awarded the Nobel Peace Prize in 2014, along with Indian child-rights activist Kailash Satyarthi. She remained in Britain after undergoing medical treatment there and was accepted to the University of Oxford last year.

At home in Pakistan, however, she has been condemned by some as a Western mouthpiece with some even suggesting on social media that the shooting was staged. Yousafzai has repeatedly responded to the criticism with a grace far outstripping her years, often saying education is neither Western nor Eastern. Often when she has spoken in public she has championed her home country and spoken in her native Pashto language, always promising to return to her home.

Man has ‘worst case of super-gonorrhea’