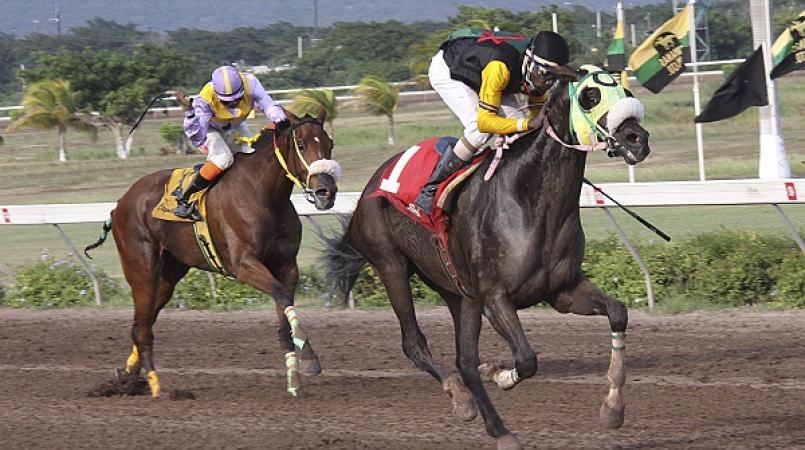 Dane Dawkins on Saturday booted home three winners at Caymamas Park including MAHOGANY, who notched a fourth straight victory as he preps for a shot at favourite WOW WOW  in next month's 2000 Guineas.

MAHOGANY swept past 1-2 favourite ENGLAND'S ROSE three furlongs out and collared SHE'S A HIT early in the stretch run for a comfortable four-and-a-quarter length winner ahead of stablemate FATHER PATRICK.

ENGLAND'S ROSE rallied to claim third from SHE'S A HIT, a disappointing effort from the full sister to two-time Horse of the Year, SHE'S A MANEATER.

Dawkins landed the following event with 8-1 shot ANOTHER AFFAIR, after opening his tally with HIGH DIPLOMACY at 4-1 in the third race.

ANOTHER AFFAIR, who is prepping for the 1000 Guineas, set for July 25, gave a command performance at six and a half furlongs, going all the way with Dawkins to clock 1:19.3 ahead of  KING ARTHUR, who finished nine-and-a-half lengths away.

Dane Nelson also rode three winners, moving his tally to 21, extending his lead atop the jockeys' standings to eight ahead of Anthony Thomas.

Nelson opened the programme with SUPREME AUTHORITY before landing the fifth in a driving finish aboard DESRIANNA, collaring a weakening FABULOSITY at the wire.

He sealed his three-timer astride Anthony Nunes' even-money favourite, PRINCE CHARLES, handing the champion trainer his second winner of the afternoon following FANTASTIC FEELINGS' victory in the seventh with Shane Ellis.

Racing continues at Caymamas Park with back-to-back meets this Saturday and Sunday.