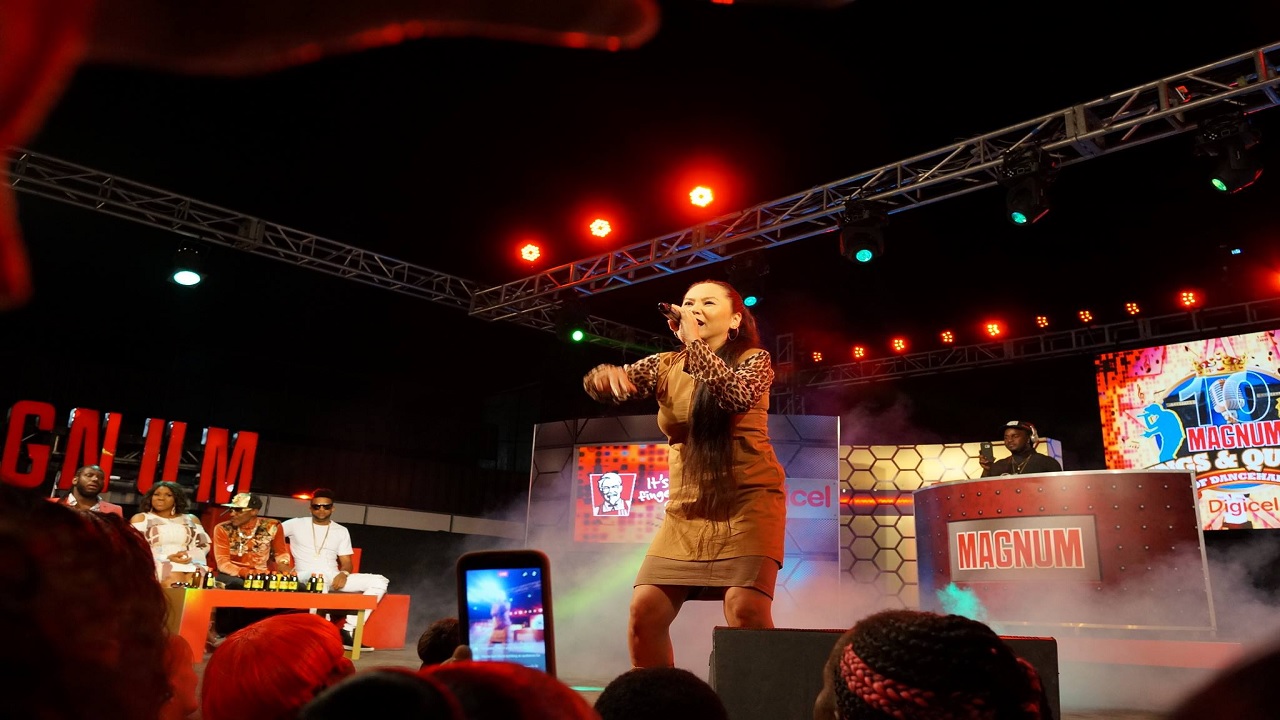 Rankin Pumpkin performing during the Magnum Kings and Queens of Dancehall competition.

Mark Kenny, executive producer and creator of television talent series Magnum Kings and Queens of Dancehall, has expressed disappointment at remarks made by Japanese contestant Rankin Pumpkin after the season finale on Saturday.

The Japanese deejay expressed shocked by what she described as “racist comments” directed at her by members of the public, fellow contestants and even “one of the judges” throughout the course of the competition.

“I was very surprise how I was treated as a Japanese citizen. It seems as if they don`t want any other citizens to be in their competition,” Rankin Pumpkin said.

“I wanted to quit more than once, but my Jamaican producer African Symbol say don`t quit,” she said.

She accused one male judge of saying if “this Japanese lady… went to the final he will quit the job”.

"At the final event, some people come and talking at my ears many racist comment threatening kill me if I win. Talk about murder in patwa language. Many intimidation," she said.

However, Kenny refuted the allegations in an interview with Loop News on Monday afternoon.

According to Kenny, her allegations either stem from cultural differences or she is just downright lying.

He said, "I think it is cultural misinterpretation how people in Jamaica are. Never once did she come to the production team or producer and say to anybody that there were racists comments targeting her.

"I don't believe it is true. Maybe it is because she did not win, but this is all new to us. If something like that happened somebody would have gotten wind of it,” Kenny said.

He explained that contestants “made fun of each other” throughout the contest and “it was not meant to be malicious.

“The humour might have been lost on her,” Kenny said in a telephone interview with Loop News’ reporter Job Nelson.

Kenny added that even when Suspense was injured in a car accident, the other contestants made fun of her, and everyone laughed about it.

Kenny said, "the producers are sorry that she ever felt like that. We are disappointed that if she did feel like that, she didn't come and say something to us. She was treated just like everybody.”

"We are disappointed that she said that after the show when she would have had ample opportunity during the show to do so," Kenny concluded.

I really enjoyed the competition.

It was very nice exposure.

It seems very easy in the competition looking from the out side. But very very tough inside. Many racist comments from audience and contestants. Also one of the judge of the competition. I was very surprise how I was treated as a Japanese citizen. It seems as if they don`t want any other citizens to be in their competition. In some point, I wanted to quit more than once, but my Jamaican producer African Symbol say don`t quit.

At one point racist comment from the same judge saying that this Japanese lady if she went to the final he will quit the job. Some time when I am singing he push finger in his ears, some time turned his back on me even though the audience jump up and enjoy my song.

He also publicly said he wish, I drop off from the competition.

But I continue to push on until I reach the final.

But the racist comment that he push generate some energy on the some of the local population also on the street.

I was surprise because Japan is one of the biggest supporter of Reggae Music in the world since 1979 when Bob Marley introduce to us. Most of Reggae concert that held in Japan such as Japan Splash etc. They are all Jamaican artists and entertainers.

We don`t understand what they are singing because we speak fluent Japanese, they sing in patowa broken English. We don`t understand but we still enjoy their music when they performing with a lot of happiness and love. We open our heart and give love to all Jamaican artists and entertainers.

So I was shocked of what I received in the Jamaican competition.

Fortunatly I reached at final at the competition.

Many many comments on the street saying Japanese people trying to win the competition. Get the money and take away Jamaican money, take away Jamaican music. At the final event, some people come and talking at my ears many racist comment threatening kill me if I win. Talk about murder in patowa language. Many intimidation .

So I decide not to perform. But my producer keep saying I should perform. So I protest in my mind I not gonna do it. When I went up to the stage, for the clash that why I did not contest the clash. If you look on Youtube see my facial impression that something was wrong.

Big up to Ms Kitty who accept me gave me first chance to enter the competition at audition venue. Big up Professor Nuts. Big up to Bountyh Killa who saw my talent and gave me good comment. Big up to my producer African Symbol also African Symbol recording studio crew. Big up Vashti, Big up Bobby, Big up to Jah Wise and Ceyon.

Thank you from Rankin Pumpkin