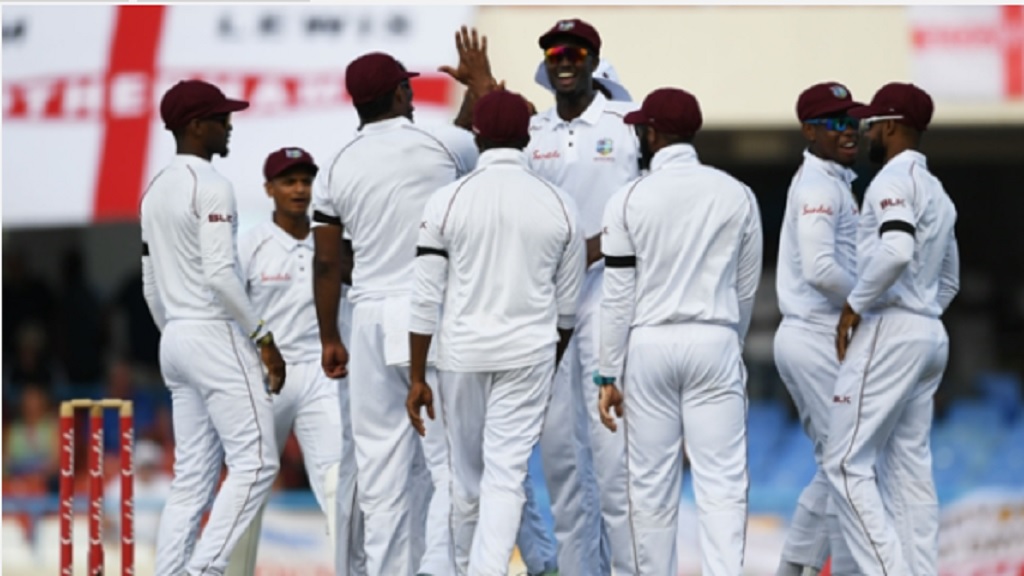 The tourists' hopes of claiming only a second series win in the longest format in the Caribbean since 1968 were shattered as they folded with a whimper for 132 all out at North Sound on Saturday.

England were obliterated by pace for the third time in the series, the rapid Roach claiming 4-52 and captain Holder 4-43 on a testing track as Joe Root's side collapsed meekly from 35 without loss.

Alzarri Joseph also struck twice, showing incredible character to play following the death of his mother earlier in the day, as England were only able to set the Windies a target of 14 to win.

John Campbell rubbed salt into England's wounds by smashing James Anderson for six to win the Wisden Trophy for the first time in almost a decade with one match to spare.

Darren Bravo (50) earlier showed the unwavering application England have lacked so badly, digging in for the slowest Test half-century by a Windies batsman and the third-slowest from any nation to get the Windies up to 306 - with a first-innings lead of 119.

Anderson removed Holder (22) and Roach in quick time after West Indies resumed on 272-6 and Joseph hit a glorious straight drive before falling cheaply to Ben Stokes (2-58) after he was given a great ovation as he strode to the wicket a matter of hours after losing his mother.

The obdurate Bravo continued to dig in for a richly deserved half-century off 215 balls, batting for 342 minutes in such difficult conditions before he was stumped giving Moeen Ali (3-62) the charge.

England were in desperate need of a Bravo-style knock and although Joe Denly (17) and Rory Burns (16) made a promising start, they capitulated all too easily.

A poor shot from Burns gifted Holder a wicket with his first ball and the inspirational skipper cleaned up Jonny Bairstow before Root nicked Joseph (2-38) behind.

Denly lost his off stump shouldering arms to Joseph and Stokes dragged on attempting an expansive drive off the excellent Roach, who also bowled Moeen to leave sorry England 96-6.

Jos Buttler, top scorer with 24, played some attractive strokes to edge England in front, but Roach and Holder polished off the tail in a flash to leave Sam Curran unbeaten on 13.

Kraigg Brathwaite struck the first ball from Anderson for four and Campbell smashed the seamer over midwicket with disdain to put England out of their misery and get the party started.