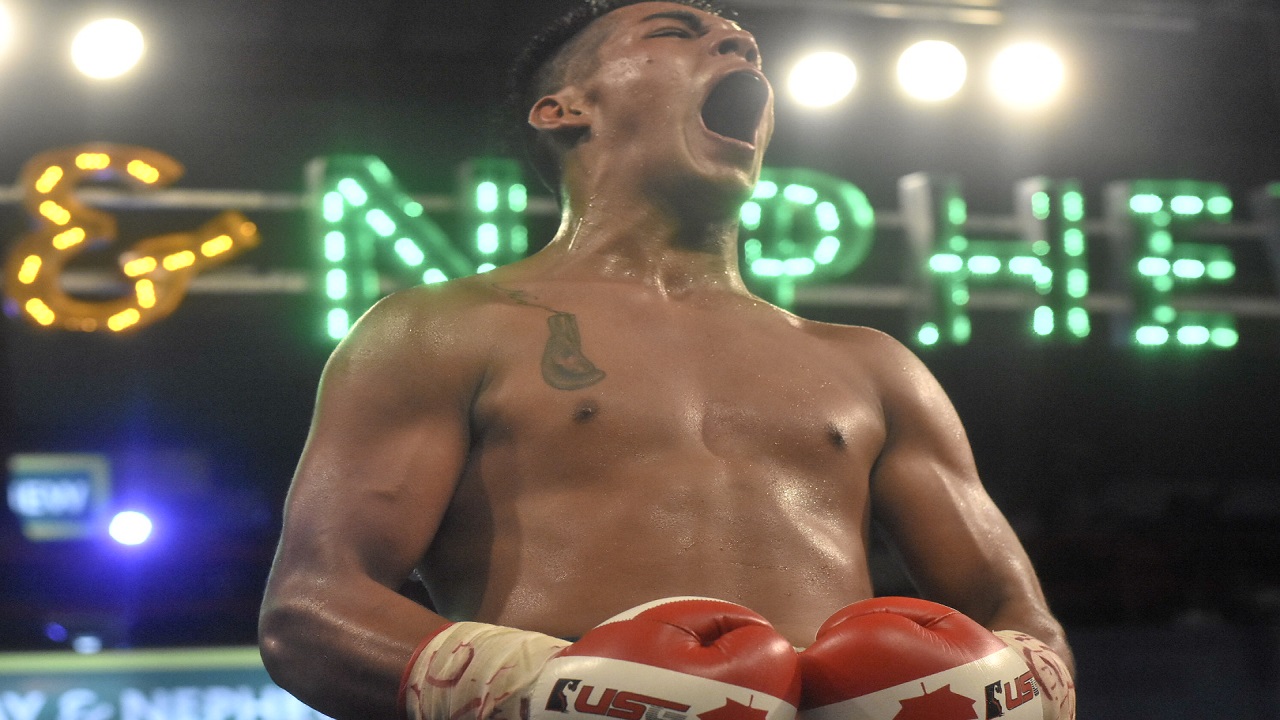 Ricardo Salas of Team Canada reacts after his fifth-round technical knockout victory over Jamaica's Nico Yeyo on Wednesday night in the last quarter-final bout of Season 8 of the Wray and Nephew Contender welterweight series, at the Chinese Benevolent Association. (PHOTO: Marlon Reid).

Ricardo 'Magic Man' Salas of Team Canada moved into the semi-finals of Season 8 of the Wray and Nephew Contender welterweight series, after securing a technical knockout victory over Jamaica's Nico 'Venom' Yeyo on Wednesday night, at the Chinese Benevolent Association.

Yeyo virtually surrendered the fight to Salas, as while seemingly not hurt, he took 31 unanswered punches from Salas in the fifth and final round and referee Owen Nelson stepped in and stopped the fight, 53 seconds inside the round.

That flurry of punches from Salas, however, were mainly on the gloves of Yeyo as he took a defensive posture on the ropes with his hands up to nullify the effects.

That assault on Yeyo began after the Jamaican lost his balance when he missed with one of his big wild punches. A few quick punches rocked Yeyo on the ropes, who immediately went on the defensive as Salas took command.

Yeyo was truly outclassed from the opening round and did not offer anything of substance to the bout. He was repeatedly warned by the referee for pushing and leaning on Salas and had a point deducted in the third round.

Salas survived the bully tactics of Yeyo by boxing cleverly, using his jabs and getting out of the way.

The 27-year-old Yeyo had earned a spot in the second round when he scored a world record win in his opening bout by flooring Mayron Zeferino in only 21 seconds. However, this time 19-year-old Salas survived his dirty tactics in the ring.

The Jamaican’s ring record as a pro now stands at two wins and two defeat. His first defeat was a disqualification on debut in last year’s Wray & Nephew Contender when he was deducted two points in a fight against Canadian Dave Leblond and ended up losing 47-47, 46-46, 48-44.

Salas, who was born in Mexico,  has now recorded nine victories from of his 10 fights.

Yeyo was upset with the decision of the referee. He said, "I am disappointed because the ref shouldn't even have stopped it, because I am blocking and I am moving alongside the ropes.

"Once you see a man moving, there is no time to stop it. Watch the overseas fights, how many times a man back up a man and a throw a barrage a punch and yuh si him move down the line and move back up and then get chance to throw back punch. That shouldn't stop.".

Salas, speaking through an interpreter said that he was not surprised that the referee stopped the fight because Nico was against the ropes and he was not answering his punches. He praised the experience and knowledge of the referee in stopping the fight.