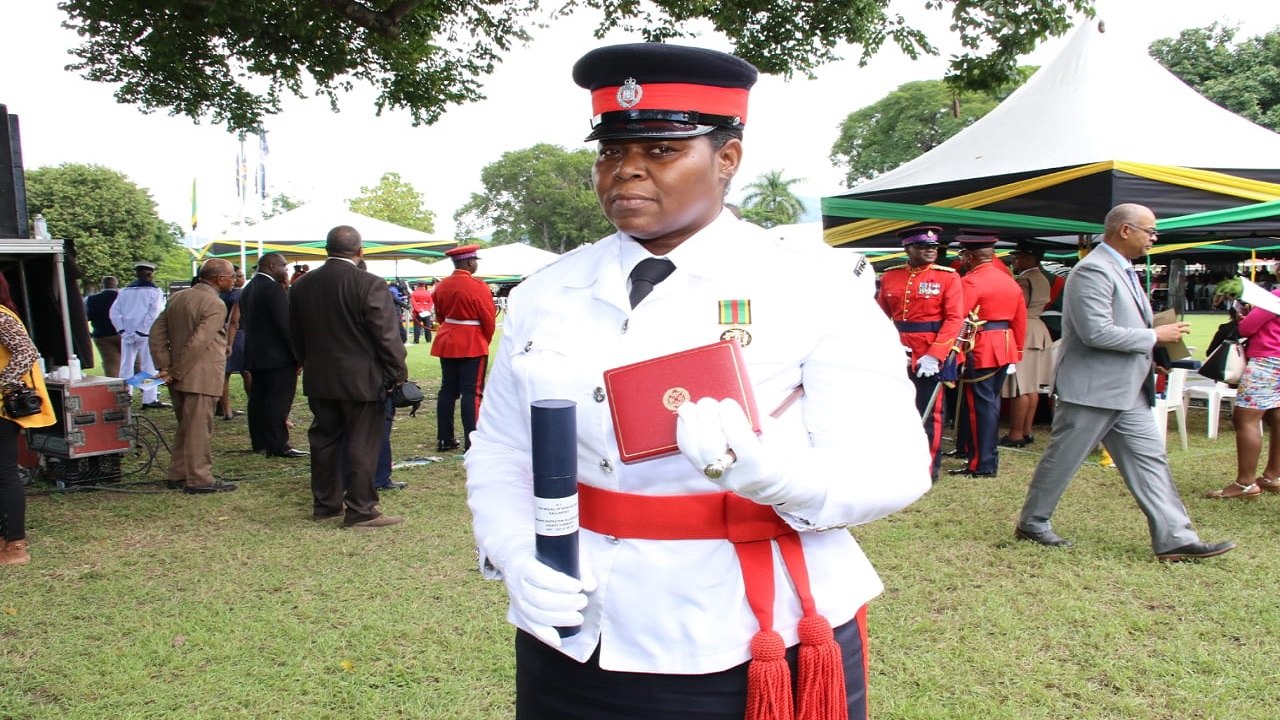 Inspector Allison Grant-Johnson poses with her Medal of Honour for Gallantry at the National Honours and Awards held at King's House in St Andrew on Heroes Day. (PHOTOS: Llewellyn Wynter)

The biggest rounds of applause at the 2018 National Honours and Awards Ceremony at King’s House on Monday were reserved for three members of the uniformed groups – specifically the Jamaica Defence Force and the Jamaica Constabulary Fore (JCF).

The three, a policewoman and two soldiers,  had one thing in common – they displayed bravery in the face of danger as they came to the defence of others.

In the case of the soldiers, their citation said they were awarded for "rendering instantaneous assistance to police constable Leighton Hanson on 28th April, 2017 who was disarmed and shot by a gunman at point blank range.” They engaged the aggressor and offered aid to the visibly wounded police officer, displaying “selflessness and courage in the face of adversity.”

On the day in question, Hanson and another policeman had responded to a robbery on Constant Spring Road in the vicinity of Merl Gove High School. While escorting the robbery suspect back to his patrol vehicle, Hanson was disarmed of his service pistol and shot in the head.

Davis and Wilson who were passing by saw what was happening and challenged the shooter who engaged them in a shootout. The would-be robber was hit and died later in hospital.

For her part, Inspector Grant-Johnson received her Medal of Honour for Gallantry for displaying “extraordinary bravery in confronting gunmen in defence of her family on September 26, 2017 when her daughter was held at gun point.”

Without flinching, “Inspector Grant-Johnson drew her service pistol and contended in a shootout with the gunmen after which she discovered that she had a gunshot wound to her upper right arm.”

On the day of the incident, Inspector Grant-Johnson was at home in Portmore, St Catherine with two of her four children when they were held up by gunmen reportedly from nearby Central Village. She challenged the gunmen, killing one while the other escaped, reportedly in nearby bushes.

The Inspector and her family were deliberately targeted by the gunmen.

The ceremony that ran a tight schedule, lasted approximately two hours and 40 minutes and, apart from the JDF massed band, saw entertainment from Andre Shepherd, Etana and Purple String Esemble.