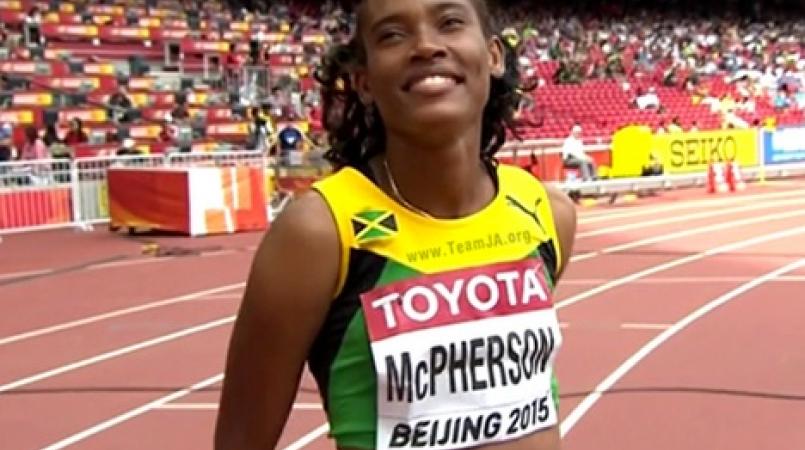 Stephenie Ann McPherson, the 2013 world bronze medallist,  will lead three Jamaican runners into the women's 400-metre final at the 2017 IAAF World Championships in London following the semi-finals on Monday.

McPherson clocked a season best 50.56 to finish second behind Rio Olympic champion Shaunae Miller-Uibo of the Bahamas in the opening heat to secure an automatic qualifying spot

After surging clear in the opening 300 metres, Miller-Uibo could afford to slow down halfway down the home straight and still finish a comfortable winner in 50.36 – 0.20 ahead of  McPherson.

McPherson will be joined by her Jamaican teammates Novlene Williams-Mills and Olympic and World Championships bronze medallist Shericka Jackson, who both had to wait until the third and final heat to secure their spots as fastest losers.

Naser entered the home straight some five metres down on the flying Felix but closed the gap on the nine-time World Championships gold medallist before nipping past in the final few strides to win in 50.08, another big PB and national record.

It put the teenager fifth on the world U20 all-time list, missed the Asian U20 record by a mere 0.07 and was the fastest time by an U20 athlete since Sanya Richards-Ross in 2004.

Felix, seeking a second world title at 400m and no doubt revenge for her loss to the diving Miller-Uibo in the dramatic Olympic final in Rio last year, took the second automatic qualifying spot in 50.12.

Phyllis Francis, a member of the gold medal winning US 4x400m team in Rio last year, was a clear winner of the heat, clocking 50.37. Zambia’s Kabange Mupopo finished runner-up in 50.60.

The 2011 world champion Amantle Montsho of Botswana was fourth in 51.28, and also failed to make it.