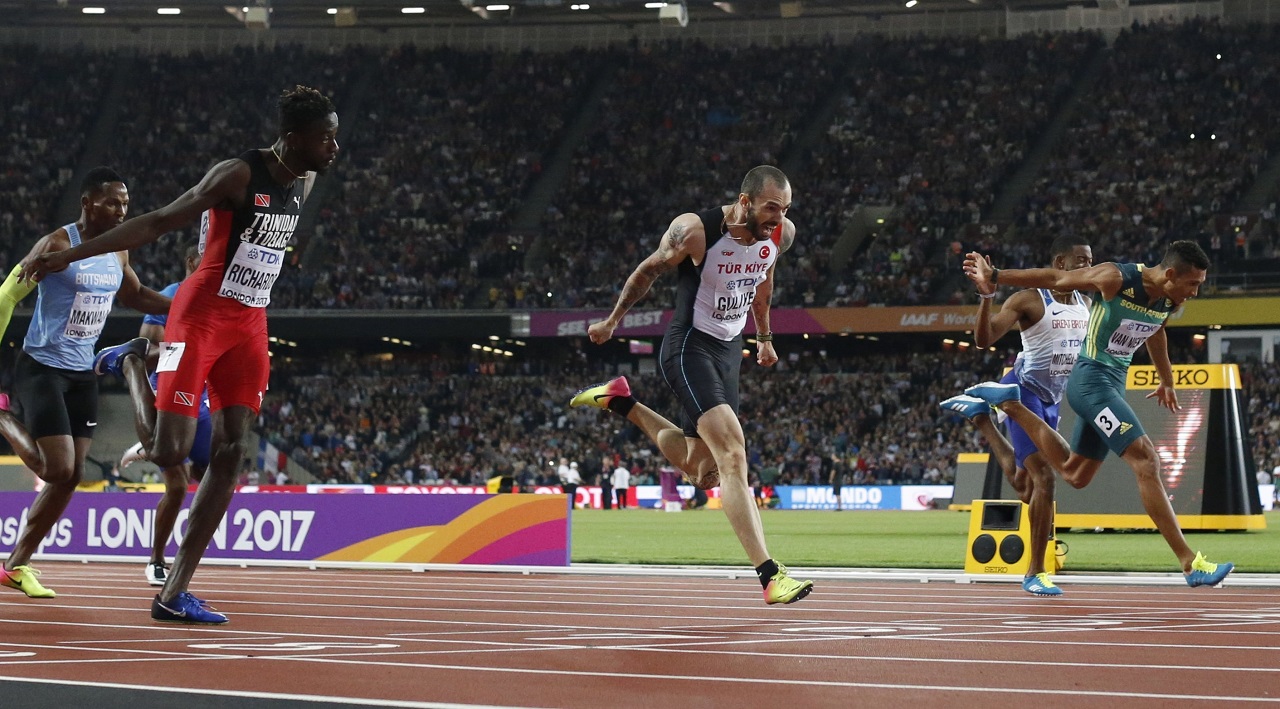 Turkey's Ramil Guliyev, center, crosses the line to win the gold in the men's 400-meter final during the World Athletics Championships in London Thursday, Aug. 10, 2017.

It wasn't Wayde van Niekerk and it wasn't Isaac Makwala.

Instead, Ramil Guliyev of Turkey earned the upset of the 2017 IAAF World championships in London on Thursday when he matched Van Niekerk stride for stride and won the 200-metre title by lunging at the line just ahead of the favored South African.

Jereem Richards of Trinidad and Tobago took bronze, while Makwala faded down the stretch and finished sixth.

Guliyev, a little-known 27-year-old sprinter who transferred nationality from Azerbaijan six years ago, was not even among the top-10 performers this year before he stunned his rivals and the 60,000-sellout crowd at the Olympic Stadium, which had come to see Van Niekerk and Makwala fight for gold.

Guliyev finished in 20.09 seconds, .02 seconds ahead of both Van Niekerk and Richards. The South African took silver by .001 seconds.

Guliyev held his hands over his mouth in sheer disbelief after the slow race.

"This is not a shock, but this does not feel real," said Guliyev, whose best performance coming into the world championships was a silver medal at the European championships last year.

Van Niekerk can only be disappointed with gold and silver. He fell just short of getting the first 200-400 double at the world championships since Michael Johnson in 1995.

In the first 200-metre final without Usain Bolt since 2009, it was wide open from the start. Van Niekerk was slightly ahead coming off the bend but could not make his fluent stride count as Guliyev stuck with him all the way.

Makwala, at the end of the saga that started with a stomach virus early in the week followed by a belated entry in the heats, failed to sustain the early pace and quickly fell out of contention.

Meanwhile, the women's 200-metre final will take place on Friday and just as in the men's final, there will be no Jamaicans.

All three Jamaican sprinters crashed out during the semi-finals on Thursday.

This time there was no home-straight heartache for Shaunae Miller-Uibo, who won the heat.

Twenty-four hours on from the drama of the women’s 400m final, when the Olympic 400-metre champion suddenly lost what appeared to be a winning lead 20m from the line, fading to fourth, the 23-year-old Bahamian was back to her smooth-striding self .

Her hopes of completing an unprecedented 200m-400m double having been scuppered, Miller-Uibo sailed comfortably through to Friday’s final at the shorter distance with the joint-fastest time of the round.

Miller-Uibo came off the bend in third place but eased clear of her rivals to win in 22.49, with US sprinter Kimberlyn Duncan second in 22.73.

Earlier, in the first heat Jamaican Sashalee Forbes struggled to finish in fifth place in 23.09.

Defending champion Dafne Schippers of the Netherlands won the heat in 22.49 seconds (the same time as Miller-Uibo in heat two), with  Dejah Stevens of the US finishing second  in 22.71.

The other Jamaican Jodean Williams was outclassed in the third and final heat, finishing seventh in 23.32.

The 100m silver medallist Marie-Josee Ta Lou of the Ivory Coast prevailed in 22.50, with Britain’s Dina Asher-Smith – impressively running into form following her late start to the season after breaking her right foot in February - matching her season’s best of 22.73 in second place.