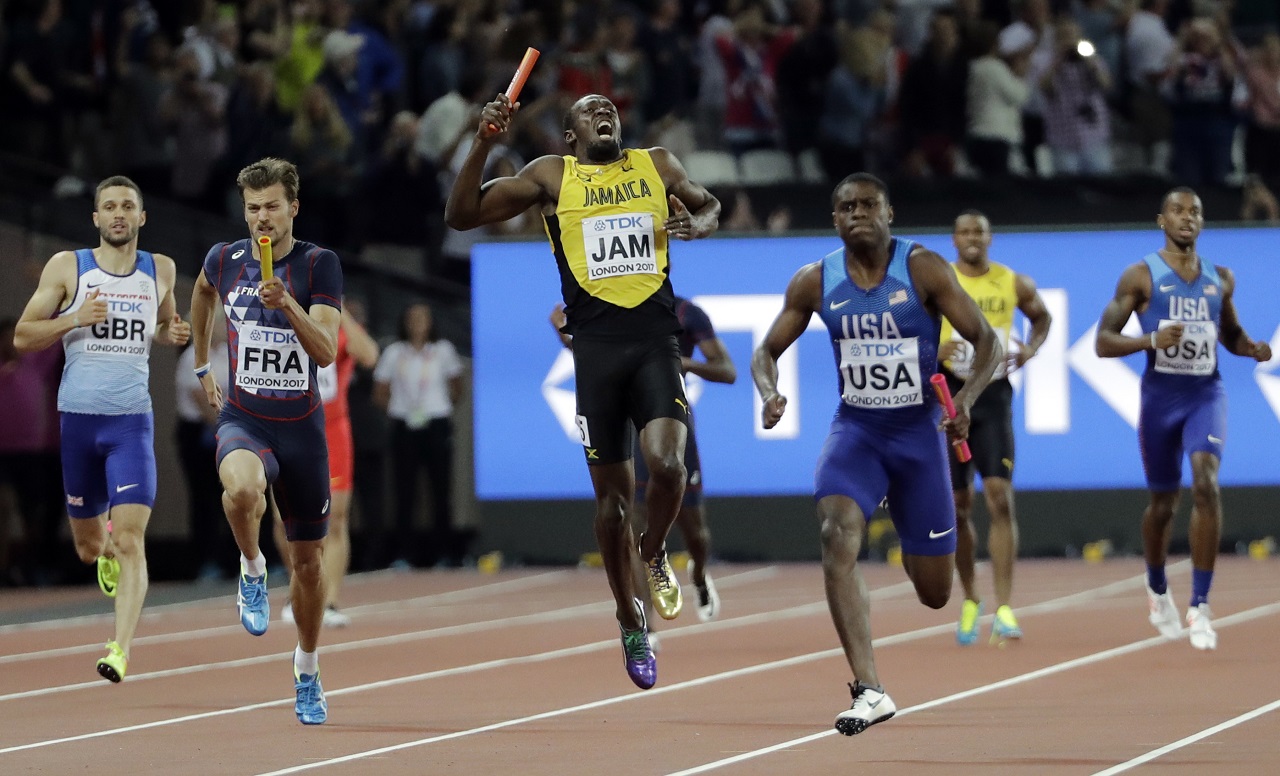 Jamaica's Usain Bolt, center, pulls up injured in the final of the Men's 4x100m relay during the World Athletics Championships in London Saturday, Aug. 12, 2017. At right is United States' Christian Coleman.

Usain Bolt's illustrious athletics career finished on a painful and shocking note at the IAAF World Championships in London on Saturday, the iconic sprinter pulling up with an injury as Great Britain claimed a shock gold in the men's 4x100m relay.

Bolt set off on the final leg behind the United States' Christian Coleman and Nethaneel Mitchell-Blake of Great Britain and pushed too hard to reach the front, appearing to pull a hamstring and falling to the ground as he failed to finish.

While the Jamaican lay prone, it was Britain who crossed the line first in a world-leading time of 37.47 seconds. The Americans were .05 seconds behind. Japan took bronze in 38.04.

The crocked Bolt was soon joined by his team-mates Omar McLeod, Julian Forte and Yohan Blake, who helped him to his feet and across the line before departing down the tunnel.

Rather than bemoaning a far from fitting end to the 30-year-old's distinguished career, the crowd inside London Stadium were lost in celebration for the victorious home nation.

It means Bolt misses out on matching Allyson Felix's record World Championships medal haul of 15, sending him into retirement in disappointing fashion.

McLeod got Jamaica off to a good start, but Gatlin helped close the gap on the back straight.

However, Blake - who missed out on a medal in the 100m, failed to make the 200m final and was an injury doubt in the hours leading up to the race - was overtaken around the bench by Jaylen Bacon and Daniel Talbot.

The US were joined in a battle for first by Britain, and Mitchell-Blake showed sensational pace to get to the line first, with Bolt pulling up before dropping to the deck.

The Jamaican left the track with a wave, but largely unnoticed as London Stadium celebrated what had appeared an unlikely gold and the host nation's first in this event since Athens 2004.

The World Championships ends on Sunday with Jamaica in 14th place on the medal table with four medals, comprising one gold and three bronze.

Omar McLeod won the only gold medal for Jamaica in men's 110-metre hurdles on Monday.