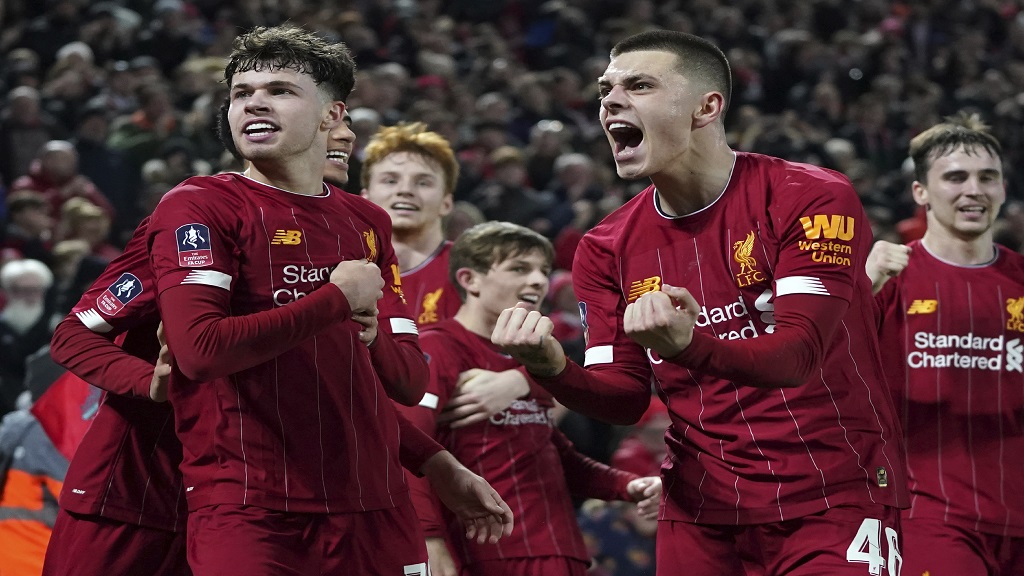 Liverpool reached the fifth round of the FA Cup for the first time under Jurgen Klopp.

He wasn’t at Anfield to see it.

With Klopp determined that he and his senior players had the week off during English soccer’s new midseason break, Liverpool fielded their youngest ever team - at an average age of 19 years, 102 days - for the fourth-round replay against third-tier Shrewsbury on Tuesday.

The kids, led for the game by under-23 coach Neil Critchley, came through, winning 1-0 to set up a last-16 match they probably won’t be playing in. It will be at Chelsea in early March.

An own-goal in the 75th minute settled the match and it was scored by Ro-Shaun Williams, a former youth-team player for Liverpool’s fierce rival, Manchester United.

Shrewsbury had few chances at Anfield but did have a goal ruled out by VAR for offside in the 58th minute.

The win keeps alive Liverpool’s chances of a treble. The Reds are closing in on winning the English league title for the first time in 30 years, and are through to the last 16 of the Champions League.

Wayne Rooney is set for a reunion with Manchester United.

The former England captain scored for his new team, Derby County, in their 4-2 win over Northampton in a replay.

Second-tier Derby advanced to a home game against Man United, where Rooney spent 13 years and became the club's all-time top scorer while winning five Premier League titles, the Champions League in 2008 and the FA Cup in 2016.