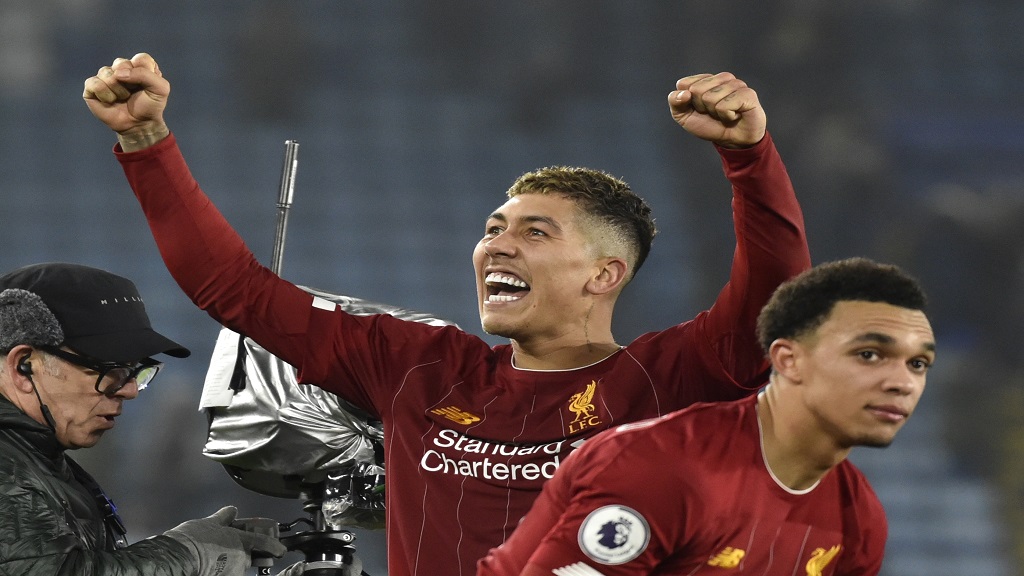 Liverpool opened up a 13-point advantage at the top of the Premier League as Roberto Firmino scored twice in a 4-0 victory at Leicester City.

The Reds showed no sign of fatigue after winning the Club World Cup in Qatar last weekend, with their nearest challengers Leicester overwhelmed at the King Power Stadium.

Substitute James Milner made it 2-0 from the penalty spot before Trent Alexander-Arnold teed up Firmino for his second and then finished the scoring himself as Liverpool moved closer to a long-awaited title.

After a pre-match build up that featured fireworks and flashing lights, Leicester looked completely overawed by the occasion and almost conceded twice in the opening 70 seconds.

The Foxes continued to roll the dice, Evans' misplaced pass resulting in another chance for Salah, who was just pushed too wide after Schmeichel rushed out and failed to get near the Liverpool forward.

Wilfred Ndidi was the next to lose possession, recovering to deflect Jordan Henderson's effort wide, before the leaders finally made the breakthrough.

Alexander-Arnold whipped an inviting ball from the left to the back post and Firmino guided his header between Schmeichel's foot and the post.

Schmeichel rescued Evans by denying Mane following another error from the Northern Irishman, with Leicester fortunate to only be trailing by one goal at the break.

Liverpool were relentless after the resumption too, though Firmino side-footed Andy Robertson's delivery wide after Dennis Praet became the latest man in a blue shirt to be dispossessed.

It did not matter as a seven-minute blitz saw the Reds put the game to bed.

First Caglar Soyuncu leant into a corner and the ball struck his arm, with referee Michael Oliver pointing straight to the spot, from where Milner coolly dispatched the penalty.

Firmino then turned home another cross from Alexander-Arnold, who finished past Schmeichel himself to give Liverpool a fourth goal en route to their 17th win out of 18 Premier League games this season.