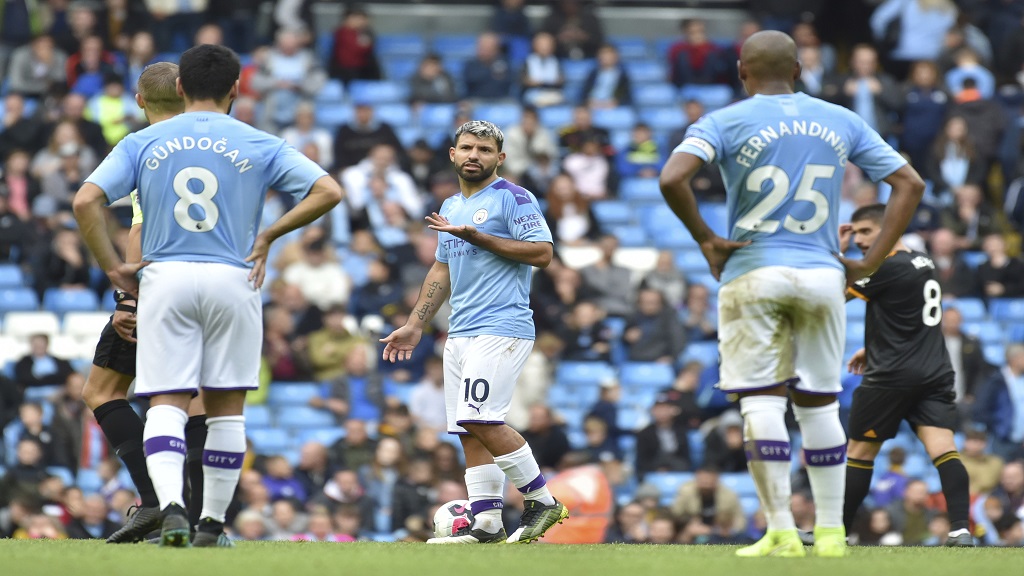 Liverpool might never have a better chance to end their long wait for an English Premier League (EPL) title.

Leader Liverpool are enjoying an eight-point advantage over defending champion Manchester City after their closest rival stumbled going into the international break.

Sunday went badly wrong for Manchester teams, with United and City losing on the same day for the first time in more than six years.

Man United entered the late match at Newcastle with their worst seven-game start to a league season in 30 years, and dropped to 12th after Matthy Longstaff scored in a 1-0 win for the hosts.

City had a shock defeat at home to Wolverhampton Wanderers with Adama Traoré scoring twice in the closing stages for a 2-0 win. It was the first loss at home for Pep Guardiola's team in any competition since a 3-2 defeat to Crystal Palace in the league last December.

City's chances of reeling in Liverpool are being hampered by injuries in defense and the loss of Kevin De Bruyne, who is injured again after a run of problems last season.

City had dominated possession but failed to really trouble Rui Patrício in the Wolves goal. David Silva struck the post with a free-kick but it was as close as City were going to get before Traoré finished off a break started by Raúl Jiménez in the 80th.

Traoré grabbed his second in similar fashion in injury time after Wolves withstood the home side's desperate attempts to equalize.

It left Guardiola contemplating the side's second defeat of the season and the third game in which it has dropped points.

Liverpool maintained their perfect start with a late 2-1 win over Leicester on Saturday. Liverpool have not won the league title since the 1989-90 season.

Guardiola said "when one team is eight points in front it is better not to think too much about that. It is better to think about what is next."

City next play at Crystal Palace on October 19, one day before Man United host Liverpool.

The 19-year-old Longstaff, who clipped the crossbar in the first half, sealed a dream debut with the winning goal in the 72nd minute. Jetro Willems ran at the static United defense and cut the ball back for Longstaff, who let fly from outside the penalty area past the helpless David De Gea in the United goal.

The visitors were without the likes of Paul Pogba, Anthony Martial and Jesse Lingard.

"We do lack quite a few key players but that's no excuse now," Solskjær told Sky Sports. "The players work hard, they ran their socks off, at the moment we're in a position we're not used to."

Counterpart Steve Bruce enjoyed his first home win as Newcastle manager — and his first win as a coach over his former side United at the 23rd attempt across all competitions.

Chelsea beat Southampton 4-1 away to stretch the team's winning run to four games across all competitions under Frank Lampard.

Tammy Abraham, Mason Mount and N'Golo Kanté scored in the first half before Christian Pulisic brilliantly set up fellow substitute Michy Batshuayi for Chelsea's fourth goal in the 89th minute.

Pulisic had only come on in the 80th for his first appearance in the league since Aug. 31. The United States midfielder dinked the ball in behind the Southampton defense for former Borussia Dortmund teammate Batshuayi to complete the scoring.

The win lifted Chelsea to fifth place after eight rounds, just behind Leicester on goal difference.

Former Chelsea defender David Luiz helped Arsenal move up to third with his first goal for the Gunners in a 1-0 win over Bournemouth.

Luiz headed home off a corner from Nicolas Pepe with only nine minutes gone. It turned out to be the only goal of a game that lacked both chances and quality as the Cherries managed to keep in-form Arsenal striker Pierre-Emerick Aubameyang on the periphery.

Arsenal have still lost just once this season in the league and now sit one point behind Manchester City.