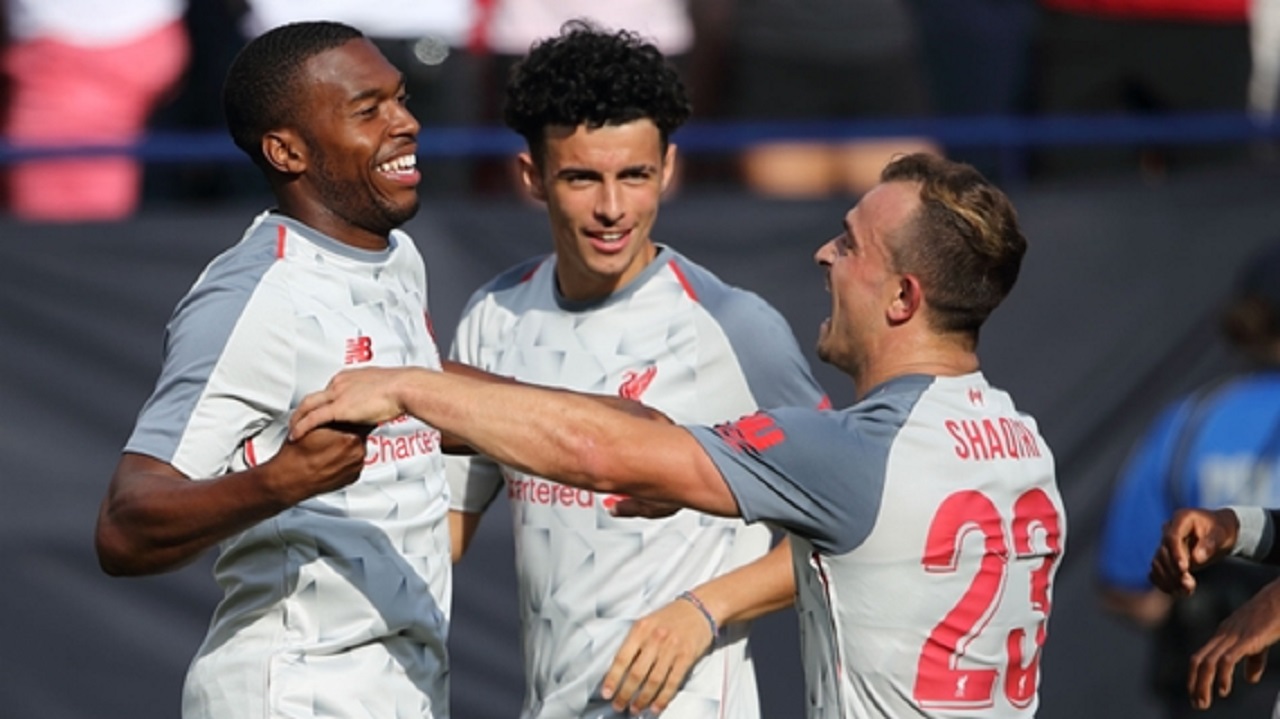 Daniel Sturridge scored with his first touch off the bench and Xherdan Shaqiri struck a stunning overhead kick in a 4-1 International Champions Cup win over Premier League rivals Manchester United on Saturday.

Sadio Mane hit the winner from the penalty spot as Liverpool beat Manchester City 2-1 last time out and the Senegal star was on target from 12 yards again to open the scoring after Mohamed Salah was fouled.

United soon hit back though, with Andreas Pereira continuing his impressive pre-season form by curling in a sensational 25-yard free-kick to level within three minutes.

Although Jurgen Klopp made a series of substitutions, Liverpool continued to play the better football and they edged ahead in the 66th minute thanks to two of their decisive changes, Shaqiri setting up Sturridge to make an immediate impact.

And Liverpool's second ICC win out of three was completed when Ojo stepped up to convert another penalty, Andrew Robertson having been clipped by Ander Herrera, Shaqiri then wrapping up the scoring in sensational style with a bicycle kick from 12 yards.

Liverpool started on top and Lee Grant had to be sharp to tip over Salah's header from a clever Mane pass, both Reds forwards making their first starts of pre-season.

Klopp's side were closer to the opener from the resulting corner but, although James Milner's cross picked out Virgil van Dijk and the defender beat Grant with a flicked header, Herrera made a brilliant clearance on the line.

Juan Mata had the ball in the net for United in the 20th minute but the midfielder strayed narrowly offside as he raced on to a superb long pass from Alexis Sanchez.

It was Liverpool who opened the scoring, Mane drilling home into Grant's bottom-right corner from 12 yards after Salah was clumsily felled in the penalty area by Demetri Mitchell.

Liverpool's lead was short-lived as United hit back within three minutes in fantastic fashion.

Pereira won the battle to take a free-kick left of centre, 25 yards from goal, and he beat Kamil Grabara with a sensational strike that rattled into the rookie goalkeeper's top-right corner.

Mane and Salah were withdrawn at half-time as Shaqiri made his Liverpool debut, while Joel Pereira replaced Grant in the United goal, with a pitch invader livening up a dull start to the second period.

Ojo perhaps should have done better with a back-post header from Rafael Camacho's cross, but he could not direct his effort on target. Sturridge could, though, the striker scoring within a minute of his arrival.

Shaqiri held up a long ball into the box and laid off for Sturridge to place home a first-time finish that glanced off Pereira's right-hand post on its way into the net.

And when Herrera clipped Robertson's heels in the box, Ojo calmly slotted in from 12 yards after successfully persuading Sturridge to allow him to take the penalty.

Liverpool were rampant in the closing stages and Shaqiri launched himself acrobatically at Ben Woodburn's left-wing cross to complete a memorable Reds debut for the Switzerland star.