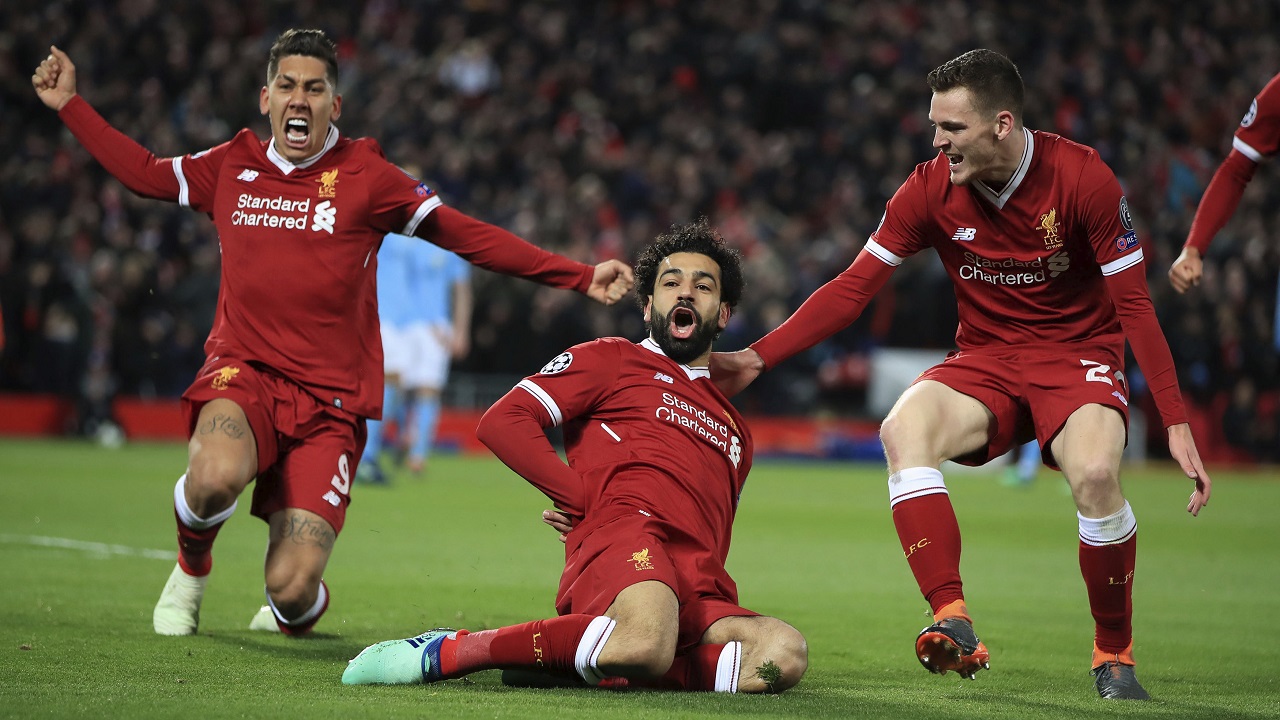 Liverpool blew away Manchester City with three goals in the first 31 minutes Wednesday to secure a 3-0 first-leg win at a rocking Anfield and close in on a first Champions League semifinal in a decade.

On another European night that will go down in the club's storied lore, Liverpool reduced the best team in England to a rattled wreck as Mohamed Salah — with his 38th goal of the season — Alex Oxlade-Chamberlain and Sadio Mane all scored in front of The Kop.

The Reds then held firm under incessant second-half pressure to stop City's attacking juggernaut from getting an away goal that would have changed the complexion of the quarterfinal matchup, especially given that Salah hobbled off injured and could be a doubt for next week's second leg at Etihad Stadium.

City's dream of a treble — it has already won the League Cup and could clinch the Premier League on Saturday in record time — might have disappeared in a 19-minute spell where the visitors folded in a red-hot Anfield atmosphere.

Pep Guardiola's decision to drop Raheem Sterling and add an extra body in midfield in Ilkay Gundogan completely backfired, with City lopsided and its four central midfielders seemingly unsure of their roles. Aymeric Laporte — a center back — also looked lost as a makeshift left back, up against Salah.

Only in the 57th minute did Guardiola throw on Sterling, but that might have come too late.

Liverpool, with five titles in the European Cup, have now scored a tournament-high 31 goals this season and was irresistible in the first half. Salah's departure is a potential game-changer, though, and Liverpool did lose 5-0 at City in the Premier League this season.

The atmosphere was heated even before the game as the team bus bringing City's players to Anfield was attacked outside the stadium, with some fans throwing cans and at least one bottle at the windows. Such was the damage that City had to order another bus to take the squad home.

It will be a quiet journey.

A madcap nine-minute spell in a 4-3 loss at Anfield in January cost City its unbeaten start to the Premier League but Guardiola vowed that he wouldn't change his attacking approach for his team's return to a stadium where City has won only once in 37 years.

He did, though. And from the moment Liverpool scored the opening goal, City looked rattled.

A stray pass from Leroy Sane allowed Liverpool to counter through James Milner's pass down the right flank to Salah, who fed Roberto Firmino down the middle. Firmino's shot was blocked by Kyle Walker, but the Brazilian managed to pass the ball across for Salah to send a rising shot into the net.

Oxlade-Chamberlain had his best game for Liverpool since his summer move from Arsenal and he rifled in the second goal in the 21st after referee Felix Brych played the advantage following Vincent Kompany's foul from behind on Firmino.

Guardiola paced his technical area, scratching his head. Kevin De Bruyne barked at his teammates. But worse was to come for City.

Salah had a long-range shot blocked but after the ball came back to him, he sent over a curling cross that just went over Fernandinho's head and was met with a headed finish by Mane.

It threatened to get even uglier for City in the final minutes of the half as they kept getting stretched by Liverpool's forwards, with Nicolas Otamendi having a particularly tough time.

Liverpool didn't want to hear the halftime whistle. And the sight of Salah hobbling off in the 52nd minute with what appeared a left groin injury gave hope to City.

The introduction of Sterling, for Gundogan, meant City reverted to its usual shape but Liverpool's defending was excellent, especially Trent Alexander-Arnold and the oft-maligned Dejan Lovren.

Liverpool last reached the semifinals in 2008, when it lost to Chelsea. The team won the Champions League in 2005 and lost the final in 2007.