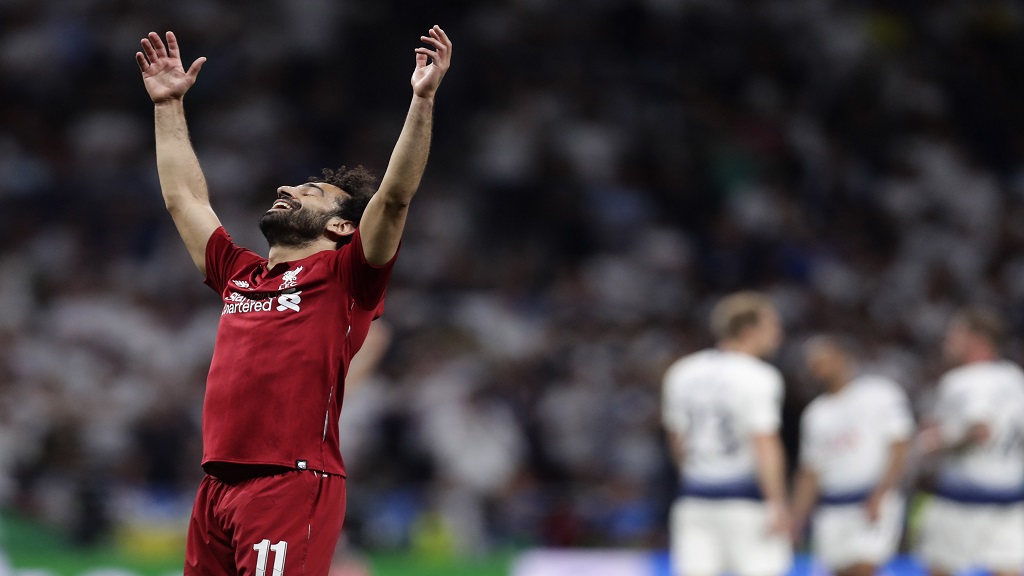 Liverpool's Mohamed Salah celebrates their victory after beating Tottenham 2-0 in the Champions League final at the Wanda Metropolitano Stadium in Madrid, Saturday, June 1, 2019.

Mohamed Salah put last season's final heartbreak behind him by setting up a 2-0 win over Tottenham in Madrid and a sixth Champions League triumph for Liverpool.

Egypt star Salah was infamously injured in a challenge with Real Madrid captain Sergio Ramos before the Reds subsided to a 3-1 defeat in Kiev 12 months ago but grabbed the opener in a largely forgettable contest at the Wanda Metropolitano.

Liverpool and their Premier League counterparts played in fits and starts thereafter, with Spurs enjoying their most consistent spell of pressure before substitute Divock Origi added to his semi-final brace against Barcelona by drilling clinically into the bottom-right corner three minutes from time.

After a moment's appreciation was observed for the late Jose Antonio Reyes the game began in dramatic fashion.

Sissoko errantly brought his arm away from his body and, under the current interpretations of the handball rule, was always likely to be punished once struck by Sadio Mane's chipped cross.

Trent Alexander-Arnold sent a low drive whistling wide in the 18th minute and the Liverpool defender made a vital intervention as Son Heung-min threatened to go through on goal shortly afterwards.

Lloris tipped over from the Reds' other full-back, Andy Robertson, as a scrappy first-half yielded no further goals.

Alexander-Arnold intervened to thwart Son once more after the break, with Klopp's decision to send on Origi and James Milner suggesting a focus upon containment.

But Milner almost gave the Reds breathing space when he drove narrowly wide from 18 yards in the 69th minute.

It fell to Origi to make sure for Liverpool and he made no mistake with a sweetly struck left-footed effort after Tottenham failed to clear a corner and Joel Matip nudged the ball into his path.

What does it mean? Liverpool cap historic season by ending Klopp's final woes

After six consecutive losses in major finals, Jurgen Klopp has his hands on silverware once more. Although this was not the contest to set pulses racing that many expected, few will begrudge the affable German and his fabulous team this success after a 97-point haul was not enough for Premier League glory.

The scale of Mauricio Pochettino's achievement in getting Tottenham to this showpiece should be similarly appreciated, although attention will now turn towards his future after some mixed messages from the Argentine in that regard.

Although there was nothing as eye-catching as the quick-thinking corner that helped to down Barcelona, Alexander-Arnold snuffed out two of Tottenham's most dangerous moments with exemplary defending and was a persistent threat when he raided forward.

Tottenham steadied themselves impressively after a nightmare start but their much-vaunted attacking quartet failed to build upon that foundation.

Son's touch was frequently loose and a lack of ammunition from Eriksen meant questions over Harry Kane's match sharpness never received a clear answer either way. Dele Alli, so impressive in the quarter-final and semi-final triumphs was the worst of an underwhelming bunch – a tame 73rd-minute chip into Alisson's palms and subsequently misjudged header from Kieran Trippier's cross encapsulating his performance.

A well-earned rest will have to wait for the 10 Liverpool and Spurs players who have Nations League Finals commitments in Portugal next week. Jurgen Klopp's men will contend the Community Shield against treble-winners Manchester City at Wembley in August.

Liverpool duo wary of Lucas Moura ahead of Madrid showdown