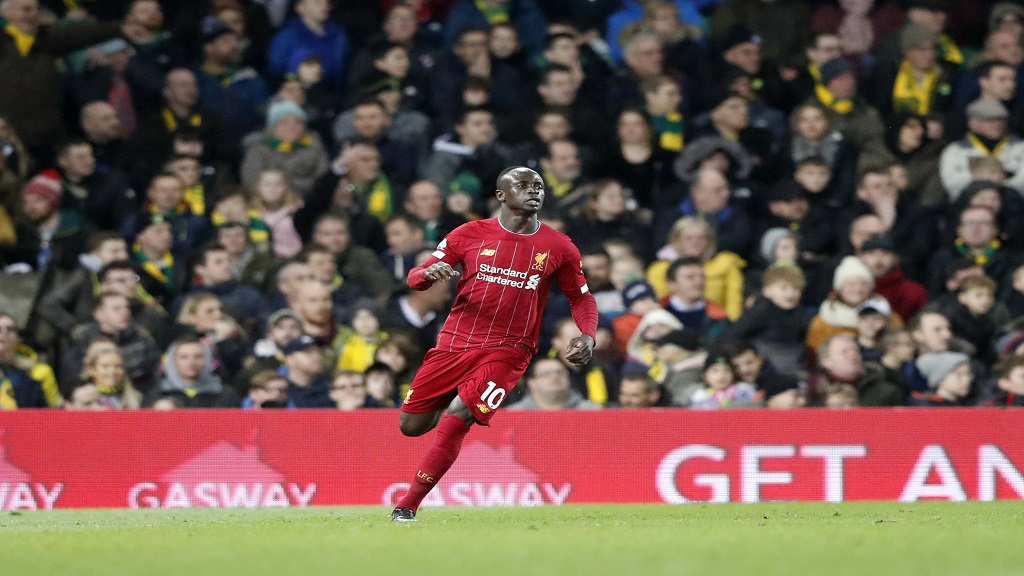 Sadio Mane made a goalscoring return for Liverpool, coming off the bench to snatch a 1-0 win for the runaway Premier League leaders at Norwich City.

Jurgen Klopp's side was on top for long spells but ceded a clear chance in each half to the Canaries – Lukas Rupp botching a one-on-one and Alexander Tettey hitting the post.

Mane duly helped the Liverpool attack shift through the gears and stepped up with the winner 12 minutes from time.

The lead at the summit is now a gigantic 25 points for Klopp's rentless Reds.

With 12 games remaining, Liverpool are now 15 points from winning the title thanks to the commanding lead over Manchester City. The second-place defending champions play West Ham on Wednesday.

Liverpool dominated possession and pushed their hosts back for the majority of the opening period but created little of note, save for a pair of sighters from the all-action Trent Alexander-Arnold.

Todd Cantwell fired into the side netting from a tight angle in the 52nd minute amid some ragged moments creeping into Liverpool's play, although a Naby Keita piledriver tipped over by Tim Krul showed their threat remained.

Krul excelled himself with a brilliant double save from Mohamed Salah and Keita before the hour, after which Mane's introduction from the bench gave fresh impetus to the Reds' attack.

Grant Hanley was forced to hack out of his own goal mouth in the 71st minute before Norwich surged forward on the break and Tettey almost caught out Alisson, firing a snapshot against the outside of the right post.

Hanley then miscued a free header from Ondrej Duda's corner and Daniel Farke's side would regret not making the most of that flurry.

Mane got the run on a tumbling Christoph Zimmermann – the centre-back picking a woeful moment to stain an otherwise towering display - to collect Jordan Henderson's raking ball and lash home a forceful left-footed finish.

Roberto Firmino could have ensured a nerveless finale but ballooned Alexander-Arnold's drilled cross over from close range in the 86th minute.

Indeed, Norwich enjoyed the best opening of the half, only for Rupp to miss a simple pass to Teemu Pukki that allowed a scrambling Alisson to claw to safety.

There is no care – Spurs boss Mourinho slams scheduling

Liverpool star Mane reveals inspiration behind his rise to the top