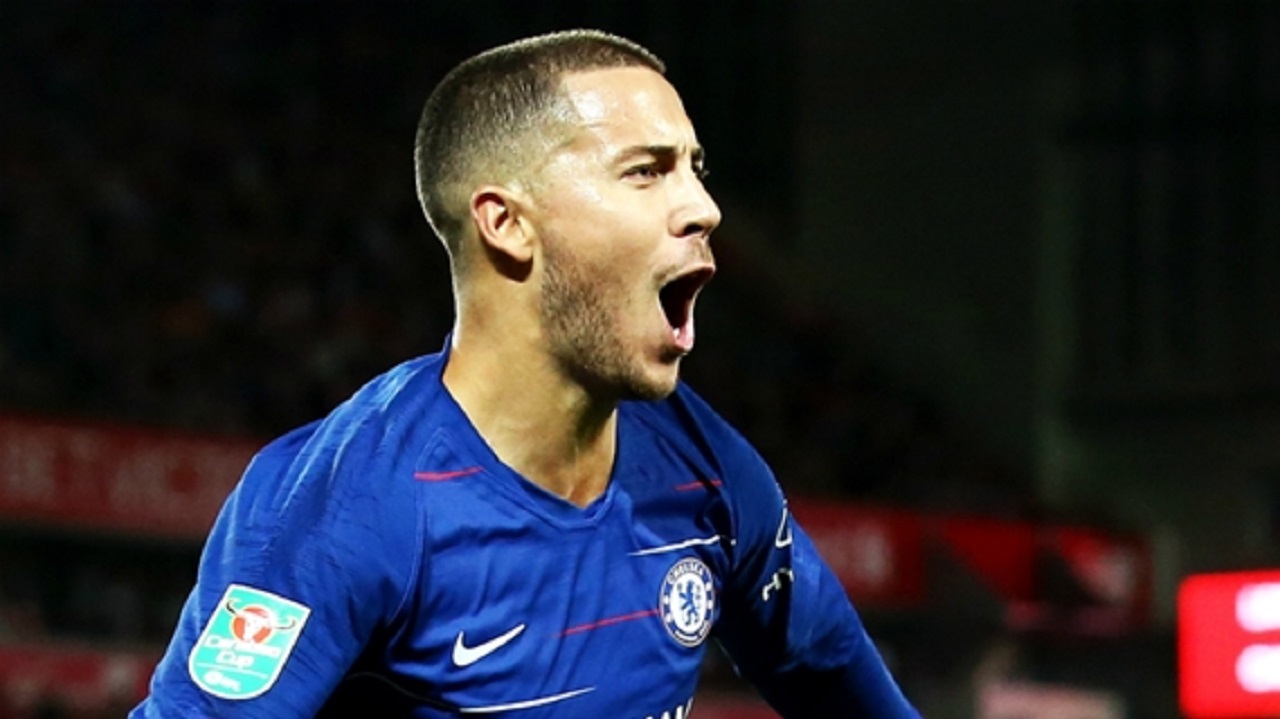 Eden Hazard came off the bench to score a wonderful winner as Chelsea battled from behind to beat Liverpool 2-1 in the EFL Cup third round, the Reds seeing their winning streak end at Anfield.

Liverpool led thanks to Daniel Sturridge's acrobatic effort, with Jurgen Klopp's men seeking to extend their victorious run at the start of 2018-19 to eight games despite resting Mohamed Salah.

Hazard was also on the bench, but Chelsea's talisman made a telling impact following his introduction to deliver the free-kick that led to Emerson Palmieri's 79th-minute equaliser before netting a stunning solo strike with five minutes left.

After nutmegging Roberto Firmino in the build-up, Hazard swapped passes with Cesar Azpilicueta, cut inside off the right, dashed past a static defence and lashed an unstoppable drive across Simon Mignolet.

Liverpool, though, will quickly have a chance for revenge as they head to Chelsea protecting a perfect Premier League record for a blockbuster Stamford Bridge clash on Saturday.

Alvaro Morata had the game's first big chance in the 19th minute, but, after collecting a superb lofted pass from compatriot Cesc Fabregas, he was denied by Mignolet's fingertips and failed to convert the rebound from a tight angle.

Naby Keita's penalty appeals were turned down when he went down under Gary Cahill's challenge, then the midfielder forced an excellent save from Willy Caballero, who kept out a Sadio Mane header before half-time.

Sturridge should have put Liverpool ahead immediately after the restart, but, having intercepted a dreadful Gary Cahill backpass and rounded Caballero, he shot wide of the open goal.

Liverpool led in the 58th minute, though, Sturridge turning in an acrobatic finish after Caballero could only push away Mane's drive, Azpilicueta's loose pass having put his team in trouble.

Hazard's introduction was the key moment as Liverpool lost at home for the first time since January, Chelsea levelling from the winger's free-kick when Emerson touched in the rebound from Mignolet saving a Ross Barkley header, with the goal surviving a long VAR review.

And Hazard then came up with a fantastic goal to book Chelsea's place in the next round, consigning Liverpool to defeat ahead of Saturday's Premier League rematch.

What does it mean: Hazard too good for rotated Reds

A lack of quality cover was arguably what let Klopp down last season, but Liverpool's strength in depth appears much better this term. Fabinho is being gradually introduced into first-team duty, while fellow new signings Keita and Xherdan Shaqiri were also given starts. But when Hazard was introduced early in the second half, the gap in class between him and Liverpool's second string was all too obvious.

With Maurizio Sarri opting to rest his conductor for the weekend clash, Fabregas got a chance to shine in what is already being described as 'the Jorginho role'. The Italy midfielder set a Premier League record for attempted passes in Saturday's 0-0 draw at West Ham and, although Fabregas did not threaten that landmark, he completed 99 passes, more than anyone else on the pitch, and created a brilliant early chance for Morata.

Poor moments for Keita and Cahill

Keita and Cahill were among the players hoping to earn more first-team minutes, but neither impressed, the Liverpool midfielder guilty of a bad dive in the first half when Cahill momentarily left a leg out in the box. Cahill, for his part, was extremely fortunate Sturridge contrived to miss when inadvertently sent through on goal by his backpass, with Hazard then saving the Blues.

Klopp and Maurizio Sarri will revert to their strongest sides when these teams meet again in the Premier League on Saturday, with Chelsea hosting the second game in four days between the teams.