The little, board house that ‘miraculously’ survived Hurricane Gilbert 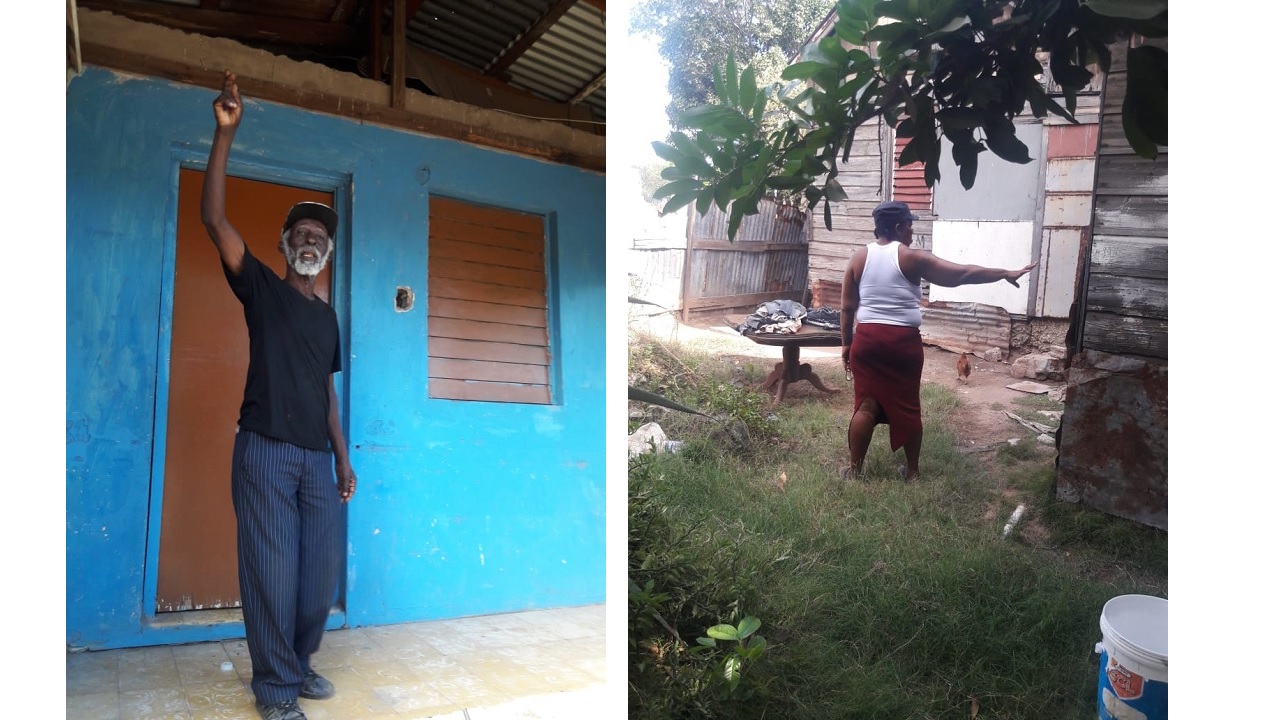 Pictured left, Oswald Lennon shows a section of his verandah roof that was sent flying by the gusty winds which accompanied Hurricane Gilbert in 1988. At right, Irene Laing points to the spot where Ms Miller’s house was located on Nelson Road.

September 12 is not a date that is met with much fanfare in the community of Nelson Road in St Andrew.

In fact, the date which marks the anniversary of Hurricane Gilbert, the weather phenomenon that has gone down in Jamaica’s history as one of the most devastating weather systems to have hit the island, is hardly remembered by many of the young people living in the South Western St Andrew community that was once led by former Prime Minister and now retired politician, Portia Simpson Miller.

One of the reasons is that the individuals there who fall in the 30-year-old age group were too young at the time to even remember the experience, while others who are not too keen on recalling the tragedy tell those who enquire that their attention is now more focused on the present, especially their bids to make life better for themselves.

But there are those in the community who could be considered middle agers and upwards, who look back at the day with much dread, with some sort of strange reverence, having outlived the ordeal that came their way back then.

In fact, every time the date comes around, some members of that group of individuals in the community take time-out to not only reflect on some of the challenges they faced, but also recall stories about the day that will be forever etched in their minds.

One of the stories that stand out for the more mature residents is that of a woman called ‘Miss Miller’.

Residents told Loop News that, at the time of the hurricane, Miss Miller was living in a really dilapidated one-room board house with several of her children, and with the threat of the hurricane becoming imminent, there was general concern about the possibility, or rather, the impossibility of the structure surviving Gilbert.

“I remembered it like it was yesterday," said Paul, a man who spent his childhood days in the community.

“When we heard that the storm was approaching, there were even persons taking bets about how long the house would be able to withstand the expected heavy winds,” he added.

Indeed, he said it was even joked that the breeze from the back of a person’s hand, if swung in the direction of the dwelling, would likely send the structure tumbling over.

But somehow, Gilbert came with all its might and Miss Miller’s extremely humble and fragile dwelling was left unscratched, to the surprise of all in the community, and the financial anguish of those who had taken up the mostly one-sided wagering on the expected fortune of the structure.

“I was at work and heard on the radio that storm a come and immediately I came home and started to do little fixing up. Mi hear some say it naw come, but mi never follow them,” recalled Oswald Lennon, a resident of Nelson Road who is now in his 70s.

He too confessed that he was among those who did not think Miss Miller’s house would be left standing after the hurricane.

Fearing for the worst — and given the fact that a menacing mango tree towered over the house — Miss Miller appropriately went to a neighbour’s house to ride out the storm with her children, including twin sons who were born shortly before the passage of the hurricane.

When the winds finally came, the roof of the verandah of Lennon’s house was one of the first ‘casualty’ of the very windy experience.

A coconut tree in the yard quickly fell and all who were in within sight of the Lennon home were by then fully seized of what was likely in store before Gilbert would say goodbye.

As was expected, other houses on the road quickly lost sections of their roofs, with at least a few zinc sheets paying the price of the intense pounding from what history will tell was fast becoming ‘Mr Gilbert’.

A squeaking sound had preceded the flight of Lennon’s verandah roof as the heavy winds picked up. Amid the experience he thought that if the breeze had ravaged his verandah’s roof in such a nonchalant manner, what had it done to Miss Miller’s house, which must have been in ruin by then?

Trembling with a combination of fear, anxiety and anticipation, Paul and his mother and his siblings looked outside to witness the final rites and, lo and behold, Miss Miller’s little house was still standing tall, with absolutely no noticeable damage to the structure.

“The mango tree beside it was uprooted and its branches rested gently on Miss Miller’s roof, holding it down. It was a wonder to everybody. Not a zinc (sheet) from the house moved,” Paul, more the group’s spokesperson, said.

“I don’t think the house suffered even a leak. We called it a miracle,” he elaborated.

Other residents who remembered the event, said it was like an angel came over to lay a hand on Miss Miller’s house.

“After the tree rested on the house top, it acted like a barrier zone for the house,” said Irene Laing, a mother of five.

“It just goes to show how God works in mysterious ways,” added the now 53-year-old Laing.

Many of the individuals who were of the belief that Miss Miller’s house would fall, were among those who suffered significant damage from Gilbert.

Megan Lee, a mother of eight, was also surprised by the manner in which Miss Miller’s house survived the onslaught of the hurricane.

“Yes, is true, because when me did have to leave my house and go over mi neighbour to stay because a tree fell through my house and mash it up, me see the tree on Miss Miller’s house and was even wondering if they were safe inside.”

Today, 30-years after the general ordeal in the community, the house is no longer at the spot, but the memories of how the building withstood the hurricane’s winds are still fresh in the minds of many in the area.

State of Emergency declared in Dominica as island braces for Isaac