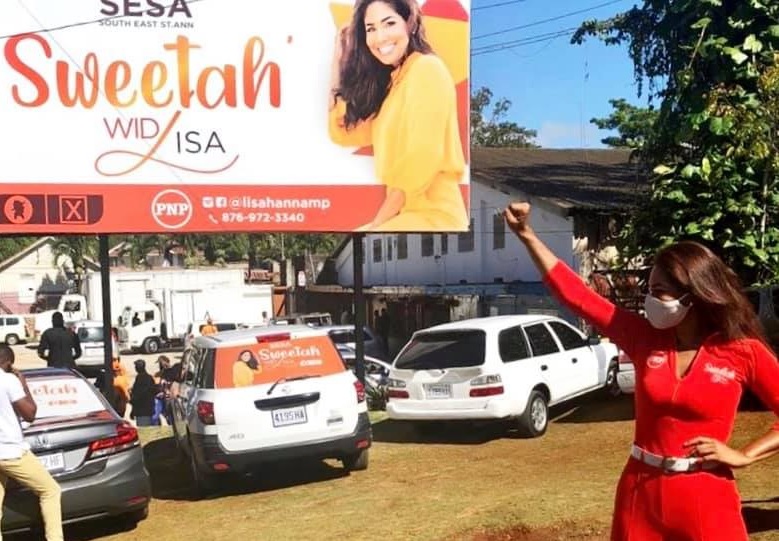 In a photo posted to her social media during the general elections campaign, Lisa Hanna raises a fist in front of a billboard bearing her image.

Lisa Hanna of the People's National Party (PNP) has been declared winner of the South East St Ann seat, following a magisterial recount which concluded at the St Ann Parish Court in St Ann's Bay on Wednesday.

Senior Parish Judge Vaughn Facey handed Hanna the victory with a count of 5,150 votes, 31 more than the 5,119 votes tallied for Delroy Granston of the Jamaica Labour Party (JLP).

The victory means that the senior PNP member will now take her place as parliamentary representative in Gordon House at its next sitting.

Additionally, the overall seat count also remains unchanged in Parliament with the JLP claiming 49 seats to the PNP's 14 seats.

A recount of the South East St Ann constituency was requested by attorneys representing Granston, who lost the seat in a closely contested race in the September 3 General Elections.

At the end of the preliminary count on Election Night, Hanna polled 5,124 votes, 14 more votes than the 5,110 votes tallied by Granston.

However, the official count gave the veteran PNP politician 5,122 votes for a victory, while the JLP candidate received 5,090 votes.

The magisterial recount had commenced at the St Ann Parish Court in St Ann's Bay on Monday.

The closeness of the contest came as a shocker on election night, as the constituency has been traditionally regarded as an impregnable PNP stronghold.

Hanna has a strong history of trouncing JLP candidates who have tried unsuccessfully to boot her from the seat.

In 2016, Ivan Anderson, the JLP's candidate, expressed confidence of securing victory in the seat, backed by the party hierarchy. But Hanna responded by delivering another convincing victory margin of 3,137 over her opponent’s 4,877 votes.