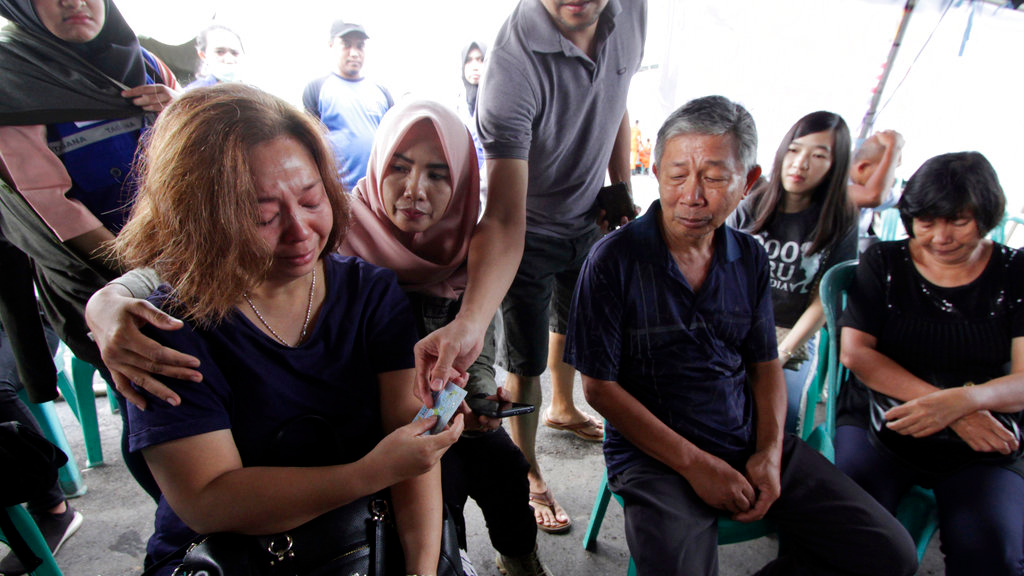 The "black box" data recorder from a crashed Lion Air jet shows its last four flights all had an airspeed indicator problem, investigators said Monday, after distraught relatives of victims confronted the airline's co-founder at a meeting organized by officials.

National Transportation Safety Committee chairman Soerjanto Tjahjono said the problem was similar on each of the four flights, including the fatal flight on Oct. 29 in which the plane plunged into the Java Sea minutes after takeoff from Jakarta, killing all 189 people on board.

Problems with the plane's previous flight, from Denpasar on Bali to Jakarta, were widely reported and "when we opened the black box, yes indeed the technical problem was the airspeed or the speed of the plane," Tjahjono told a news conference.

"Data from the black box showed that two flights before Denpasar-Jakarta also experienced the same problem," he said.

"Rumors circulating on social media are so great and here we want to clarify that in the black box there were four flights that experienced problems with the airspeed indicator."

At the meeting with family members, Tjahjono had said that information downloaded from the jet's flight data recorder was consistent with reports that the plane's speed and altitude were erratic after takeoff on its final flight. Searchers are still trying to locate the cockpit voice recorder.

Lion has said a technical problem with the jet was fixed after problems with the Bali to Jakarta flight.

Rusdi Kirana, Lion Air's co-founder, was not invited to speak by Transport Minister Budi Karya Sumadi, who moderated the meeting between relatives and the officials who are overseeing the search effort and accident investigation.

But he stood and bowed his head after angry and distraught family members demanded that Kirana, who with his brother Kusnan Kirana founded Lion Air in 1999, identify himself.

"Lion Air has failed," said a man who identified himself as the father of passenger Shandy Johan Ramadhan, a prosecutor in a district on the island where the flight was headed.

"I want Mr. Rusdi Kirana and his team to pay attention," he said. "Since the time of the crisis, I was never contacted by Lion Air. We lost our child, but there was no empathy that Lion Air showed to us."

After the meeting, Kirana left in a hurry, avoiding questions from reporters.

Many families face an agonizing wait for missing relatives to be identified. Police medical experts have received nearly 140 body bags of human remains and have identified 14 victims.

Relatives questioned why the 2-month-old Boeing 737 MAX 8 plane had been cleared to fly after suffering problems on its Bali to Jakarta flight on Oct. 28 that included a rapid descent after takeoff that terrified passengers.

"Lion Air said the problem was fixed, is it true the problem was cleared?" asked Bambang Sukandar, whose son was on the flight. "If not, technicians in charge must be responsible," he said. "The law is absolute, because they have stated that the plane was cleared to take off again. These bad technicians must be processed by law to prevent plane accidents from continuing in Indonesia."

Tjahjono said the large amount of small debris and the relatively small area the debris was found in showed the plane hit the water at a very high speed.

"The plane was intact when it plunged to the sea, it did not explode in the air, and the aircraft engine was running when it touched the water at high RPM — it's marked by the loss of all blades of the turbine," he said.

The Lion Air crash is the worst airline disaster in Indonesia since 1997, when 234 people died on a Garuda flight near Medan. In December 2014, an AirAsia flight from Surabaya to Singapore plunged into the sea, killing all 162 on board.

Lion Air is one of Indonesia's youngest airlines but has grown rapidly, flying to dozens of domestic and international destinations. It has been expanding aggressively in Southeast Asia, a fast-growing region of more than 600 million people.