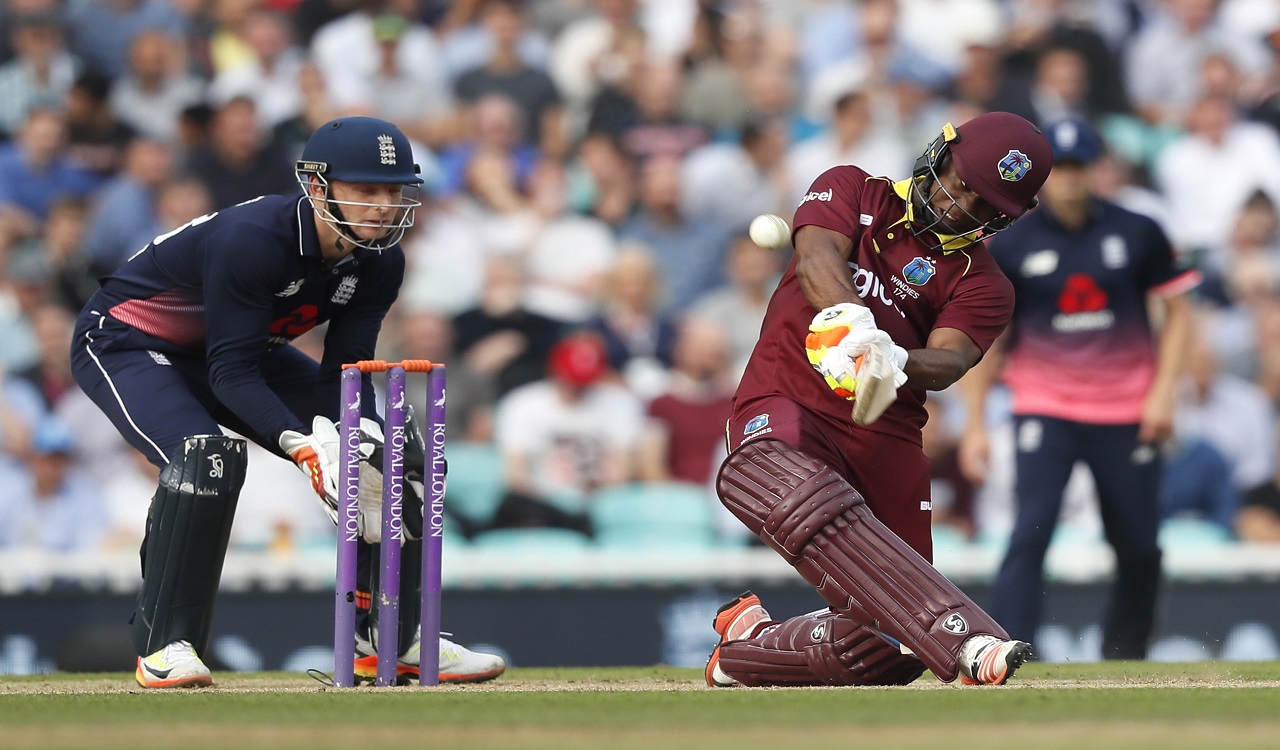 West Indies' Evin Lewis plays a shot off the bowling of England's Moeen Ali during the fourth One-Day International at the Oval cricket ground in London, Wednesday, Sept. 27, 2017.

West Indies opener Evin Lewis produced a brilliant 176 from 130 balls but England carved out a six-run series victory on the Duckworth-Lewis method in the fourth One-Day International (ODI) on Wednesday.

England ended on 258-5 in 35.1 overs, good enough to win after West Indies had posted 356-5 from their 50 overs, their best batting performance of the series.

West Indies star performer Lewis had to leave on a stretcher, retiring hurt, after hitting the ball into his own ankle and sustaining a hairline fracture.

Moeen Ali saved England and took his team to the victory.

Ali and Jos Buttler put together a perfectly-timed partnership of 77 from 48 balls to lift England from well behind the required run rate to just ahead when rain fell at the Oval and ended play.

Ali was 48 not out from 25 balls and Buttler 43 not out from 35 and their match-winning stand put England 3-0 up with one game to play in the series.

Despite the narrow reverse, Lewis' thrilling knock was not the only positive for the Windies, with Alzarri Joseph taking a career-best 5-56 to put England under huge pressure.

Indeed, the home side slumped from 126 without loss to 181-5 before Ali – the 53-ball century hero at Bristol last time out – and  Buttler put things back on track.

Jason Roy was also impressive on his return, his 84 including 11 fours and two sixes to give England a solid platform.

But it will be Moeen who will take many of the plaudits, his expansive innings timed perfectly to get his side over the line, with things having looked precarious before his arrival at the crease.

The defeat is harsh on Lewis, who at one stage looked to be setting up a victorious total, only for his match and series to come to an unhappy and untimely end.

The victory completed a successful summer of cricket for England, which won test and one-day series over both South Africa and West Indies, and a T20 series over the South Africans.

That success should have put England in buoyant mood ahead of the Ashes in two months' time, only for the arrest of allrounder Ben Stokes over a late-night incident this week to cast a shadow over England's preparations.