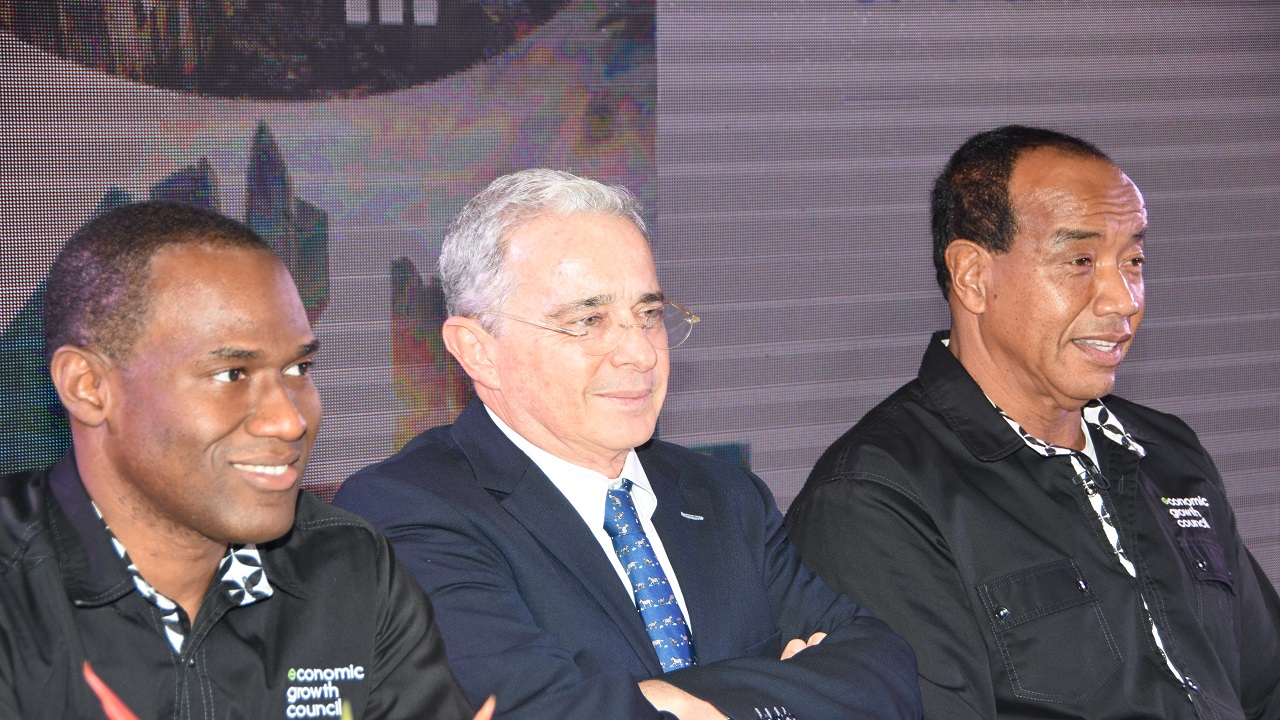 His approach lead to an uptick in economic growth from two per cent to eight per cent, as a result of a 53 per cent decline in the country’s murder rate and a 22 per cent fall in terrorism.

Chairman of the Economic Growth Council (EGC) Michael Lee-Chin, believes if the government can decisively lower the incidence of crime and violence, Jamaica to can take a page from Colombia’s book and grow the economy.

“Studies have shown that if we can bring our crime rate down and our murder rate down to the rate of Colombia’s, we can add 3 per cent GDP growth annually to our economy, and that is a big one,” Lee-Chin told guests gathered at the University of the West Indies as he delivered the EGC’s second quarter report.

“Tonight we will focus on the imperative of citizen security and public safety, this is the one that is most crucial,” Lee- Chin said, as he introduced the former Colombian president Uribe to the audience.

Uribe said his approach was to build confidence within the domestic and international community, through security, investments and social cohesion.

“At the moment when I left the presidency, the country was not converted into a paradise. But even in the middle of my mistakes, the country made significant progress”, Uribe said.

To illustrate this declaration, Uribe pointed to specifics.

“In the year 2002, foreign direct investment in the country was US$2 billion, in 2012 it was US$15 billion. For the first time Colombian companies became multilaterals and that year 8 companies invested some US$8 billion in foreign countries and domestic investments passed from US$20 billion to US$75 billion”.

Uribe made it clear that promotion of investments must go hand in hand with social policies, noting that without the pair, the citizenry will be angered.

He also advised the need for a government to be in constant dialogue with the people.

“Though I sparked controversy every day, I dedicated most of my time to permanent active dialogue with Colombian communities” he said.

“Every Saturday I went for as long as eight hours talking with the people, listening to the people on issues such as health, education, security. We engaged the people with sincerity.”

Of the 111 policy recommendations the EGC has made to the government to achieve five per cent growth in four years, half of the policies speak to improving citizen security and public safety.

“Jamaicans at every level, will realise that crime and violence is one of the biggest constraints in achieving meaningful and sustainable growth,” Lee-Chin said. “Reducing crime therefore is an imperative that we have to face head on and drive it to the ground.”

Consequently, Lee-Chin urged Government to step up efforts to complete the passage of two bills to confront terrorism and corruption.

Lee-Chin said that the bill to set up the Major Organised Crime and Anti-Corruption Agency (MOCA) as a national law enforcement agency focused on terrorism, major crimes and serious corruption, and the bill to merge the Corruption Prevention Commission and the Integrity Commission were essential to the EGC's goals.

“We need to get on with it. These bold structural reforms and others to come are designed to tackle corruption, reduce crime and take on both the economic and broader social ramifications,” Lee Chin said.

Lee-Chin noted that all the deliverables under public security and access to finance have been met.

But some deliverables related to business climate and red tape, as well as asset utilization and diaspora investments were not met, due to the need for increased human resources, which the government is trying to address.

The March 17 deadline for engaging the Diaspora as an important partner for growth and development, by commencing a feasibility study to create a global Jamaican immigration card for Jamaicans in the Diaspora, was missed by the Ministry of National Security. However, the funds have since been identified to finance the project.

Lee-Chin announced that new timelines have been set for the implementation of missed deliverables, which the EGC will be closely monitoring