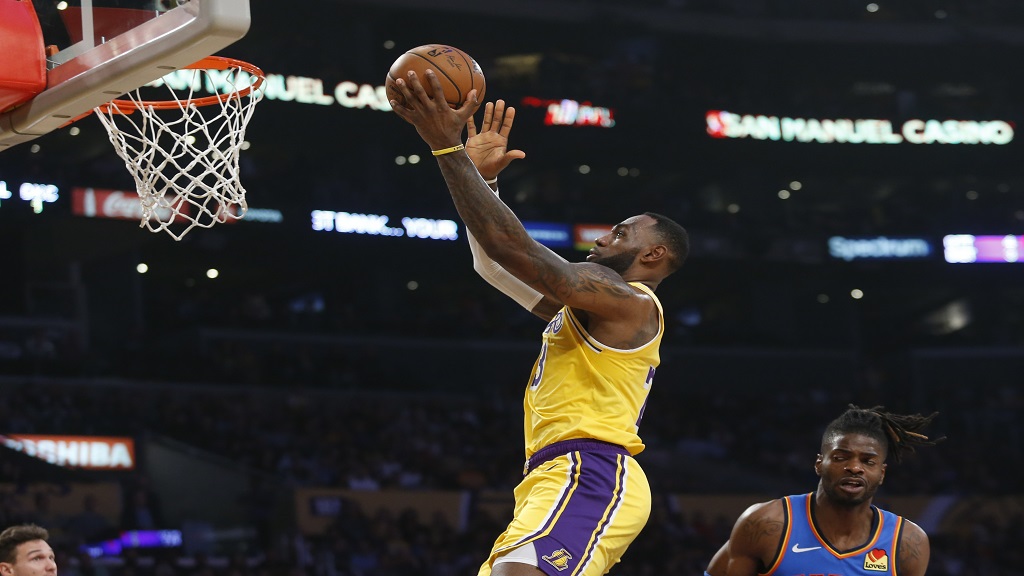 Los Angeles Lakers' LeBron James (23) goes up to the basket against the Oklahoma City Thunder during the first half of an NBA basketball game, Tuesday, Nov. 19, 2019, in Los Angeles. (AP Photo/Ringo H.W. Chiu).

The Los Angeles Lakers continued their fine form in the NBA, while Carmelo Anthony made his Portland Trail Blazers debut on Tuesday.

The Lakers improved to 12-2 and won their fifth straight with a 112-107 victory over the Oklahoma City Thunder.

They were again led by star duo LeBron James and Anthony Davis at the Staples Center.

James finished with a triple-double of 25 points, 11 rebounds and 10 assists, while Davis had 34 points. It marked more history for James, who became the first player to record a triple-double against all 30 NBA teams.

Anthony, 35, made his Trail Blazers debut in Portland's 115-104 loss to the New Orleans Pelicans.

The 10-time All-Star managed just 10 points after going four-of-14 from the field in the defeat.

The Golden State Warriors claimed just their third win of the season, beating the Memphis Grizzlies 114-95 thanks to 29 points from Alec Burks.

Draymond Green went close to a triple-double in the win, finishing with 11 assists, 10 rebounds and eight points.

Terrance Ferguson struggled for the Thunder. A first-round pick in the 2017 NBA Draft, Ferguson went one-of-seven from the field, finishing with just three points in 30 minutes against the Lakers.

It is another early-season blockbuster at the Staples Center as the Boston Celtics (11-2) visit the Los Angeles Clippers (9-5).

LeBron 'the best athlete to ever walk this planet' – Warriors coach