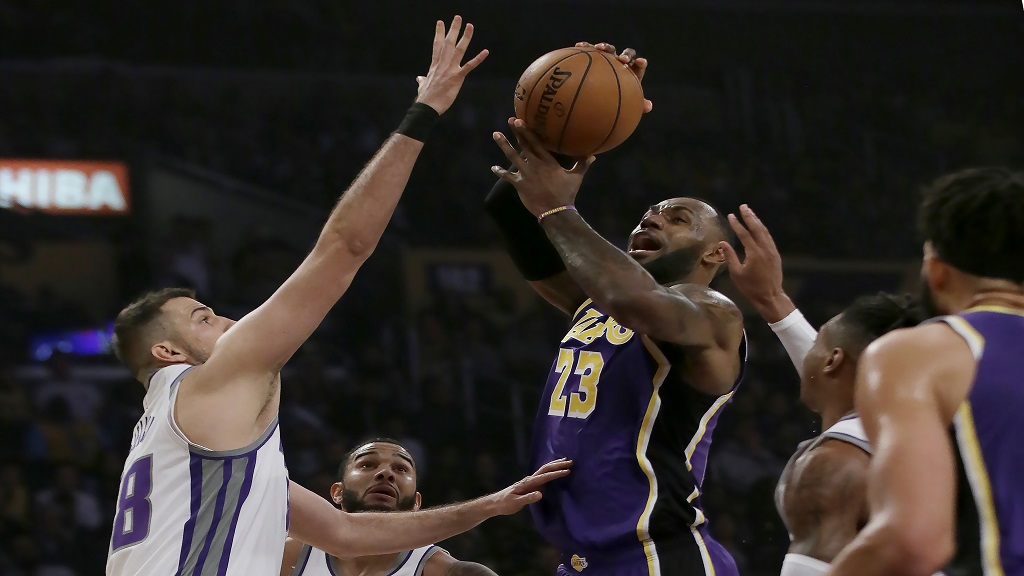 LeBron James recorded a double-double to lift the Los Angeles Lakers to a 99-97 win over Luke Walton's Sacramento Kings, while the Boston Celtics stayed hot.

James scored 29 points and 11 assists in head coach Walton's return to Los Angeles for the first time since leaving the Lakers at the end of the 2018-19 NBA season.

Anthony Davis returned from shoulder and rib soreness to post 17 points at Staples Center on Friday as the Lakers improved to 10-2.

Boston overcame a deficit away to the Warriors in San Francisco to extend their winning streak to 10 games, having not lost since the team's season opener.

The Warriors lost star guard D'Angelo Russell to a right thumb injury in the third quarter – a blow with Stephen Curry and Klay Thompson already sidelined.

It was the Bradley Beal show in Minnesota, where his 44 points fuelled the Washington Wizards' 137-116 win over the Timberwolves.

James Harden posted 44 points as the Houston Rockets extended their winning streak to six games by outlasting the Indiana Pacers 111-102. Harden has scored 36 points or more in six straight outings.

Joel Embiid put up 31 points and 12 rebounds but the Philadelphia 76ers lost 127-119 to the Oklahoma City Thunder in overtime. Danilo Gallinari led the Thunder with 28 points.

After bright starts, the San Antonio Spurs (5-7) and 76ers (7-5) are struggling for form. San Antonio dropped their fourth straight game after going down 111-109 to the Orlando Magic. Meanwhile, the 76ers – who opened the season with five successive victories – lost to the Thunder. It was Philadelphia's fifth loss in seven games.

It was another tough night for Russell Westbrook in Houston. The Rockets recruit had 17 points but on five-of-21 shooting, while he was one of six from three-point range.

Malik Monk knocked down a buzzer-beating three as the Charlotte Hornets topped the Detroit Pistons 109-106.

Saturday presents the Los Angeles Clippers with the chance to snap their skid. The Clippers ended their road trip with back-to-back losses. However, a home clash with the Atlanta Hawks could ease their woes after Kawhi Leonard sat out the defeat to the New Orleans Pelicans, while Paul George debuted.