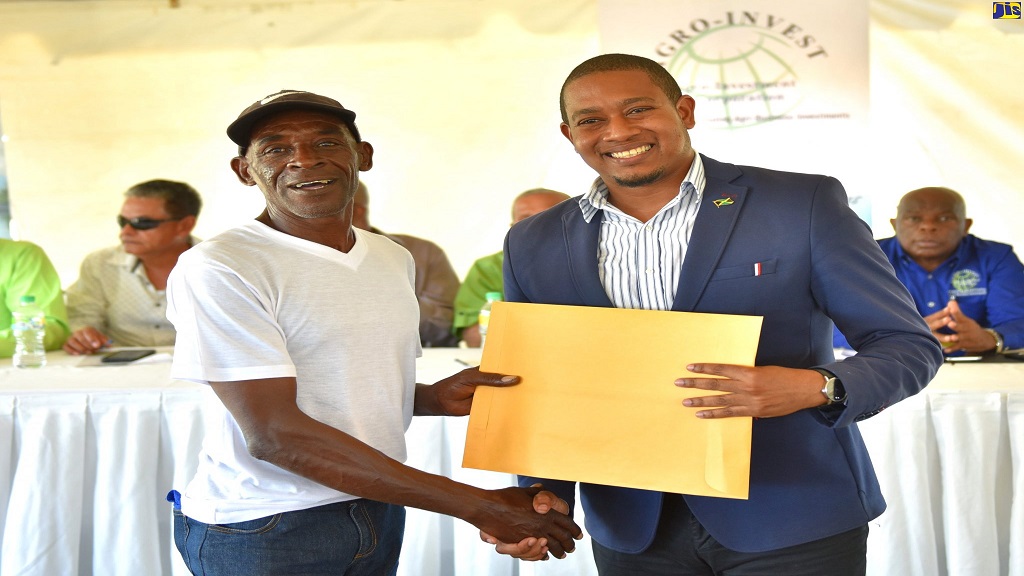 Five former Monymusk sugar factory workers received leases to parcels of land from Minister of State in the Ministry of Industry, Commerce, Agriculture and Fisheries, Floyd Green, in Hermitage, Clarendon on February 20.

The Sugar Company of Jamaica (SCJ) has provided some 164 acres of prime agricultural lands on which the displaced workers who are interested in farming, can now raise livestock and plant crops. Some 26 former employees are to receive leases.

“The lands are to be provided on a phased basis, and during phase one, HEART Trust/NTA interviewed 229 former sugar workers, from which 15 said they were interested in crop production,” Chief Executive Officer (CEO) of Agro-Invest Corporation (AIC), Dr Alexander Powell, said at the ceremony.

He said further screening of the recipients was done by the AIC to determine acreages to be awarded, financial capability and commitment to the project. The other 214 workers said they had interest in other areas, such as barbering, auto mechanics, hospitality, customer service, construction, plumbing and tractor maintenance.

The National Irrigation Commission (NIC), the Rural Agricultural Development Authority (RADA) and other related agencies are to join forces with the ministry to execute their roles in seeing that the farmers can assume possession of the lands in a timely manner.

“Beneficiaries are encouraged to read the contract document carefully, because it details payment terms, date of lease, conditions for renewal and other information. We are confident that the project will deliver employment, income, revenue, as well as growth and environmental services beneficial to the farmers, their families, the community and Jamaica,” Powell said.

In his address, Green said for a long time sugar workers have been asking for some of the land to do their farming, so the handover of leases was the culmination of a holistic plan that was started over a year ago.

He said five entities have expressed an interest to plant cane and do value-added production, and that by the end of March, the Government would be in a position to say which of them would be given serious consideration.

Green outlined that cash grants of $40 million had been given to the displaced workers, who each received a one-time direct cash transfer of $150,000.

“In collaboration with the HEART Trust/NTA, some $45 million was injected into a training and certification programme in skills, such as barbering and hairdressing, agri-business, entrepreneurship, crop production completely free to participants whether they resided on campus at Ebony Park or not,” Green said, noting that 65 workers took part in the training.

He pointed out each of the 15 workers originally scheduled to receive two to three acres of land would be based in Hermitage.

He said RADA, NIC and AIC have been brought on board to help the farmers move away from the “hit and miss” industry it has been over the years.

“So, soil tests were being facilitated and farmers would be given guidance as to the best types of crop to plant,” the state minister said.