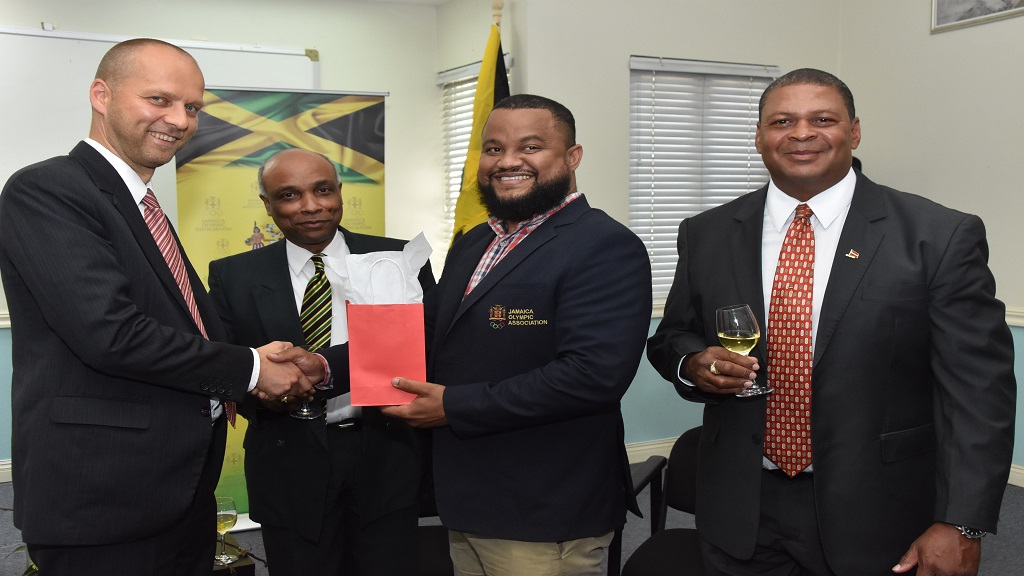 JOA Secretary-General and CEO, Ryan Foster (second right), presents a gift to Jānis Mažeiks, Undersecretary of State for Political Affairs of the Ministry of Foreign Affairs of the Republic of Latvia, while JOA President Christopher Samuda and Director Robert Scott look on.

Jamaica's apex sporting body, the Jamaica Olympic Association (JOA), has broadened the local dialogue on sport and sport development in a way that has brought overseas stakeholders to the table in bilateral discussions.

Recently, Jānis Mažeiks, Undersecretary of State for Political Affairs of the Ministry of Foreign Affairs of the Republic of Latvia, paid a courtesy call on the governing body for national sports at its headquarters, Olympic Manor.

He stated: "It was timely as the Association is seeking to establish viable global partnerships in sport to support and advance its strategic vision and mission of which mutuality and comity are central themes"

Mažeiks expressed his pleasure in meeting the directorship and management of the JOA and is confident that his visit will serve to initiate bi-lateral discussions between the respective National Olympic Committees.

Discussions held were wide-ranging and very amicable and at the end, a toast to the strengthening of the bonds of friendship between Jamaica and the Republic of Latvia was raised by JOA Director Robert Scott, who is the Honourary Consul for Latvia in Jamaica.

The JOA has committed to exploring the establishment of a Memorandum of Co-operation with its Latvian counterpart and JOA Secretary-General and CEO, Ryan Foster, in commenting said: "The courtesy call underscores JOA's commitment to building that bridge from the Caribbean Sea across the Atlantic Ocean, the Celtic Sea, through the English Channel and into the Baltic Sea which washes Latvia. Far-reaching, but that's our vision."

At the just concluded General Assembly of the Association of National Olympic Committees (ANOC) in Qatar, the JOA signed a Memorandum of Understanding with Ukraine.