The Latest: US general says Iraq dispute impedes IS fight 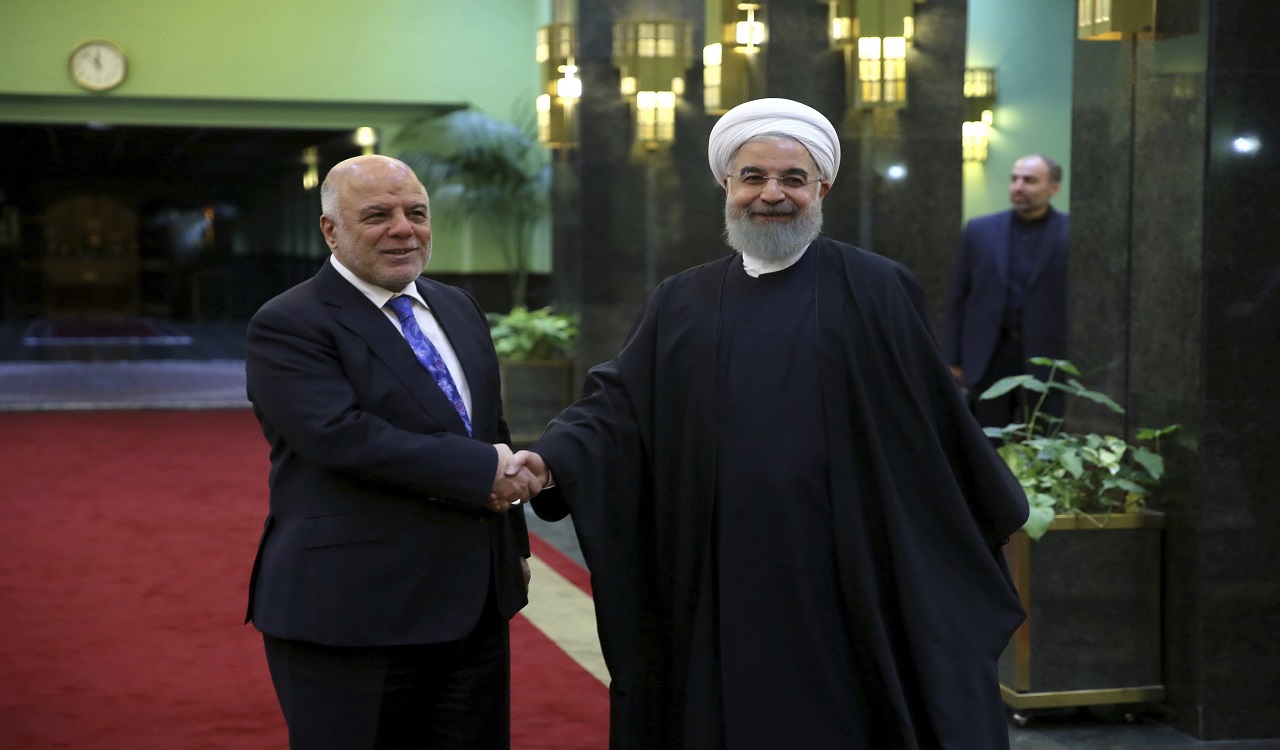 In this photo released by official website of the office of the Iranian Presidency, President Hassan Rouhani, right, welcomes Iraqi Prime Minister Haider al-Abadi for their meeting, in Tehran, Iran, Thursday, Oct. 26, 2017. Haider al-Abadi is in Iran after recent stops in Turkey and Jordan, and meetings with U.S. officials and allies eager to pull Baghdad into their political orbit.

The Latest on developments in Iraq (all times local):

The top U.S. general in Iraq says the fallout from last month's Kurdish vote for independence is diverting resources away from the war on the Islamic State group just as the coalition is on the verge of defeating the extremists.

U.S.-backed Iraqi and Kurdish forces, who together have driven IS out of most of the country, are locked in an increasingly tense standoff.

Low-level clashes have broken out as federal forces have driven the Kurds from disputed areas, and on Thursday Iraq's prime minister rejected a Kurdish offer to "freeze" the referendum, an apparent attempt by the Kurds to save face.

Lt. Gen. Paul Funk told The Associated Press: "We don't need Iraqis killing Iraqis when we've got Daesh to kill out in the west," Daesh is another acronym for IS, which still controls territory straddling Iraq's western border with Syria.

Clashes broke out earlier this month when federal forces retook the disputed city of Kirkuk and other areas outside the autonomous Kurdish region that the Kurds had seized when IS swept across the country in 2014. Most of the Kurdish forces withdrew without a fight, but tensions remain.

Turkey's prime minister says the semi-autonomous Iraqi Kurdish region's offer to freeze the results of the referendum on independence won't redress the "devastation" the vote has caused in Iraq.

Yildirim told reporters the two sides discussed the possible opening of a border gate between Iraq and Turkey that would by bypass the Iraqi Kurdish region.

Turkey, which is fighting a Kurdish insurgency on its territory, strongly opposed the Iraqi Kurds moves toward independence. President Recep Tayyip Erdogan on Wednesday offered Turkish support for the reopening of a pipeline that would allow the central Iraqi government to export oil directly to Turkey, bypassing the Iraqi Kurdish region.

The spokesman for the U.S-led coalition says the fighting between Iraqi government and Kurdish forces has impeded the movement of coalition military equipment in both Iraq and Syria, negatively impacting the campaign against the Islamic State group.

The United States uses the border between Iraq's Kurdish region and Syria to access its Syrian allies, the Kurdish-led Syrian Democratic Forces who are battling IS.

Sporadic clashes have erupted over the past two weeks as Iraqi government forces moved to retake territory that was under federal control before IS blitzed across the country in 2014. The clashes have recently moved near the border with Syria.

Army Col. Ryan Dillon told The Associated Press on Thursday that the fighting has "negatively impacted Coalition efforts to defeat ISIS, specifically the inability to move military equipment and supplies to our partners both in Iraq and Syria."

ISIS is an alternative acronym for IS.

Iran's supreme leader says he supports efforts by the Iraqi government to ensure its "unified sovereignty and territorial integrity."

That's according to a report on the official website for Supreme Leader Ayatollah Ali Khamenei.

The website quoted Khamenei as making the comments during a visit on Thursday with Iraqi Prime Minister Haider al-Abadi.

Khamenei also reportedly warned al-Abadi about U.S. policy toward Iraq, saying: "Be careful about Americans deceit and never trust them."

Al-Abadi reportedly replied: "We protect the unity and integrity of Iraq with high precision ... we will not allow the danger of disintegration to put our country at risk."

Iraqi prime minister has announced a multi-pronged operation to capture a series of towns and villages near the Syrian border from the Islamic State group.

Haider al-Abadi's statement issued early on Thursday says the operation aims to liberate Qaim and Rawa, as well as other villages — the very last remaining strongholds of IS militants in Iraq.

Al-Abadi, who's in an official visit to Iran, says IS militants have only to choose "death or surrender."

IS has been driven out of most of the territories it seized in 2014, from northern Iraq through the country's central region and across the western Anbar province.

The Kurdish leadership is saying that Iraqi troops have launched "an offensive" against Kurdish fighters near the border with Turkey.

From Baghdad, a spokesman for the mostly Shiite militia fighters known as the Popular Mobilization Forces says the Kurdish troops opened fire on the Baghdad-led forces as they moved toward the Iraqi Turkish border on Thursday.

The development is part of a recent government push to deploy forces in areas claimed by both the Kurds and the central government in Baghdad.

The spokesman, Ahmed al-Asadi, told The Associated Press that the clashes did not result in any casualties.

The statement from the Kurdish regional government says the Iraqi forces were "using heavy artillery... advancing toward peshmerga positions."

Sporadic clashes have erupted over the past two weeks as Iraqi government forces moved to retake territory that was under federal control before the Islamic State group blitzed across the country in 2014.

The moves follow a controversial referendum last month in which the majority of Kurds voted for independence from Baghdad.

Iraq's prime minister says he'll only accept a full cancellation of the Kurdish independence vote and its results, dismissing a proposal by the autonomous Iraqi Kurdish region to freeze the referendum results pending negotiations with Baghdad.

Haider al-Abadi says the central government "will accept only the cancelling of the referendum and following the constitution," according to a written statement released by his office.

Al-Abadi's announcement comes during a visit to Iran on Thursday.

The Kurds' referendum last month overwhelmingly backed independence from Baghdad. Though the vote was non-binding, it has roiled tensions with the central government and the region.

Sporadic clashes have erupted over the past week between Kurdish and Iraqi forces, former allies in the battle against the Islamic State group.

Iraqi Kurdish leaders on Wednesday offered to freeze the referendum results in order to facilitate talks with Baghdad and end the violence.

Iraqi Prime Minister Haider al-Abadi is in Iran after recent stops in Turkey and Jordan, and meetings with U.S. officials and allies eager to pull Baghdad into their political orbit.

He first attended an official reception at a government estate north of Tehran and is meeting with Senior Vice President Eshaq Jahangiri on Thursday.

Regional issues and bilateral ties are expected to dominate the agenda, as well as the Iraqi Kurds' independence referendum last month that both Baghdad and Tehran have dismissed as illegal.

Iran remains a major player in the war against the Islamic State group and culturally across Iraq, its one-time bitter enemy when Iraqi dictator Saddam Hussein waged an eight year war on Iran in 1980s that left more than one million casualties on both sides.