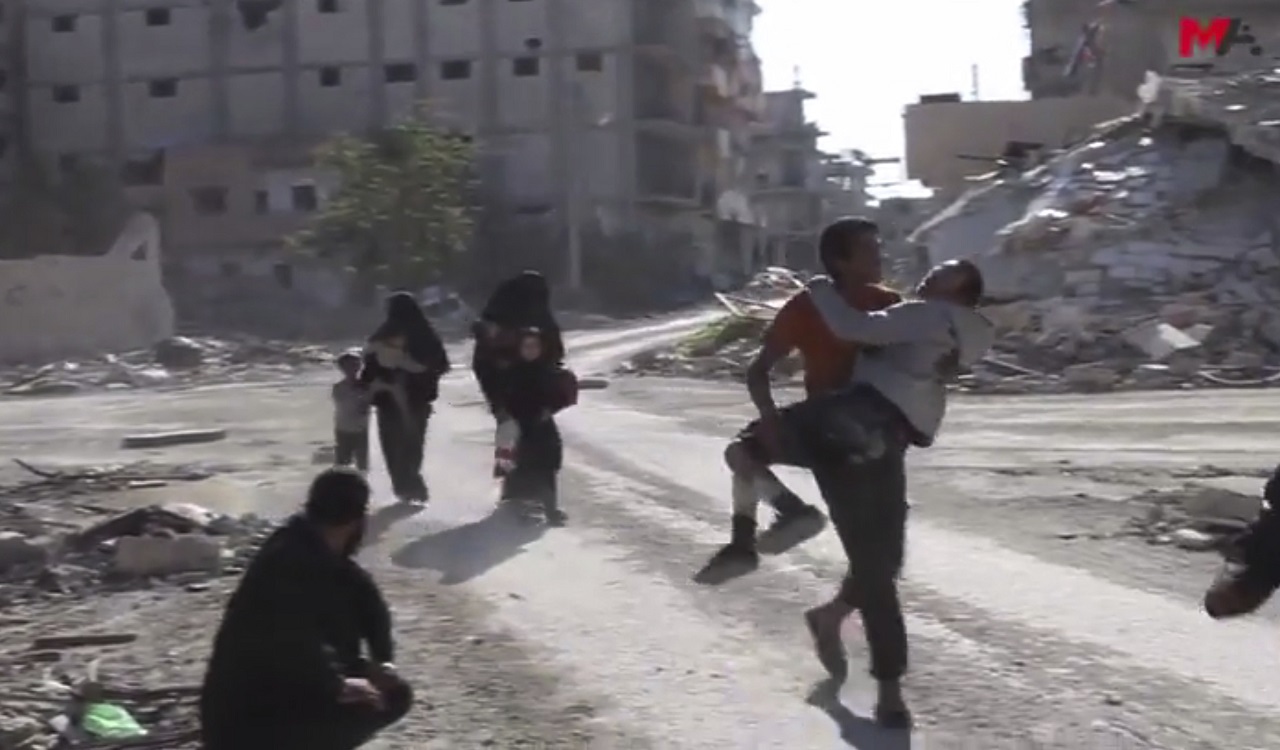 This frame grab from a video provided on Friday, Oct. 13, 2017 by Turkey-based Kurdish Mezopotamya agency media outlet that is consistent with independent AP reporting, shows Syrian civilians run on a damaged street as they fleeing from the areas that still controlled by the Islamic State militants, in Raqqa, Syria.

The Latest on developments in Syria (all times local):

Tribal leaders from the Syrian city of Raqqa say they have appealed to the U.S. coalition and their Syrian allied forces to allow the evacuation of local Islamic State fighters to stop the bloodshed.

It is not clear how many evacuees there are or where they will go. The statement says the evacuation would also save the lives of civilians the extremist fighters use as human shields.

With the push to liberate the Arab-majority Raqqa led by Kurdish-dominated forces, local officials fear a backlash once the city falls. The initiative appears to be an attempt by local leaders to stem such tension. But the deal also places the US in a bind, as it had previously rejected the evacuation of militants.

The U.S.-led coalition fighting the Islamic State group says a deal negotiated by local officials and tribesmen has been reached in Syria's Raqqa to evacuate civilians and local IS fighters but not foreign militants.

Omar Alloush, an official from the Local Raqqa Council, confirmed the deal Saturday saying local fighters have been included in the evacuation. He didn't immediately comment on the number of evacuees. The deal was negotiated by the Raqqa Civilian Council and tribal leaders.

In a statement Saturday, the coalition said it is not involved in the talks but "believes that it will save lives" and allow the U.S.-backed Syrian Democratic Forces and the Coalition to focus on defeating IS in Raqqa with less risk to civilians.

The deal reached on Thursday allows the SDF to screen and search all those leaving the area. The coalition said a convoy of vehicles is to leave Raqqa later Saturday.

Syria state media say pro-government troops have seized the town of Mayadeen, an Islamic State stronghold in the country's east, after weeks of fighting with the militants.

The Central Military Media, an outlet affiliated with the Syrian military, says the military and allied troops regained full control of the town on Saturday, after intense fighting with the militants.

The pro-government Al-Ikhbariya TV quoted an unnamed military official as saying the militants' defenses collapsed. The official says troops are chasing remnants of the militants out of Mayadeen while military corps of engineers are clearing land mines left in the town.

Rami Abdurrahman, the head of the Britain-based Syrian Observatory for Human Rights says government troops, backed by Shiite militias, have taken control of the town but are still combing it for militants.

Mayadeen has emerged as refuge for the IS leadership after several other strongholds in Syria crumbled.

The U.S-led coalition fighting the Islamic State group says the militants remaining in the Syrian city of Raqqa are likely left with only small arms to fight for the sliver of land they still control there.

The coalition says in a statement emailed to The Associated Press on Saturday that IS militants still in Raqqa are completely cut off from their leadership and likely have only pistols, rifles, light machine guns and a dwindling supply of ammunition,

Despite this assessment, the coalition says it expects difficult days ahead until Raqqa, once the militants' de facto capital, is retaken. Earlier this week, the coalition estimated that 300 to 400 militants remained in the city. On Friday, a local official said an estimated 100 militants surrendered.

This comes as U.S-backed Syrian Democratic Forces says the final battle for Raqqa is underway. A spokesman for the Kurdish militia that forms the backbone of the SDF, Nouri Mahmoud, says IS extremists still in Raqqa are mostly suicide bombers and special units that go behind enemy lines.

The U.S.-led coalition fighting Islamic State militants says "difficult fighting" is expected in the days ahead in the battle to capture Syria's northern city of Raqqa, once considered the de facto capital of the extremist group.

A coalition statement emailed to The Associated Press on Saturday says that it will continue to support Kurdish-led Syrian Democratic Forces until the Islamic State militants are completely defeated. It declined to give a timeline for the complete defeat of IS in Raqqa.

The SDF Kurdish-led forces have been battling for Raqqa since June, backed by U.S. coalition airstrikes, intelligence and advisers on the ground.

SDF officials say the final battle for the city is on, amid reports that scores of IS militants have surrendered. Civilians have also filtered out of the few remaining neighborhoods in the hands of IS. U.S. officials have reported intense bombing campaign in the last few hours.

A spokesman for the U.S.-backed forces fighting Islamic State militants in Syria says they are waging the "final" battle to uproot the extremists from the northern city of Raqqa.

Mustafa Bali, the spokesman for the Kurdish-led Syrian Democratic Forces, said on Saturday that this final battle could take hours or days.

Losing Raqqa, once the de facto capital of its self-proclaimed caliphate, would be a major blow to the militant group.

Bali says IS militants are desperately fighting in a number of neighborhoods in the city.

The battle for Raqqa began in June, with heavy street-by-street fighting amid intense U.S.-led coalition airstrikes and shelling. The battle has dragged in the face of stiff resistance from the militants and civilians trapped in the city.

The Latest: Syrian troops break IS siege on Deir el-Zour

IS claims deadly attack in Syria against US-backed force