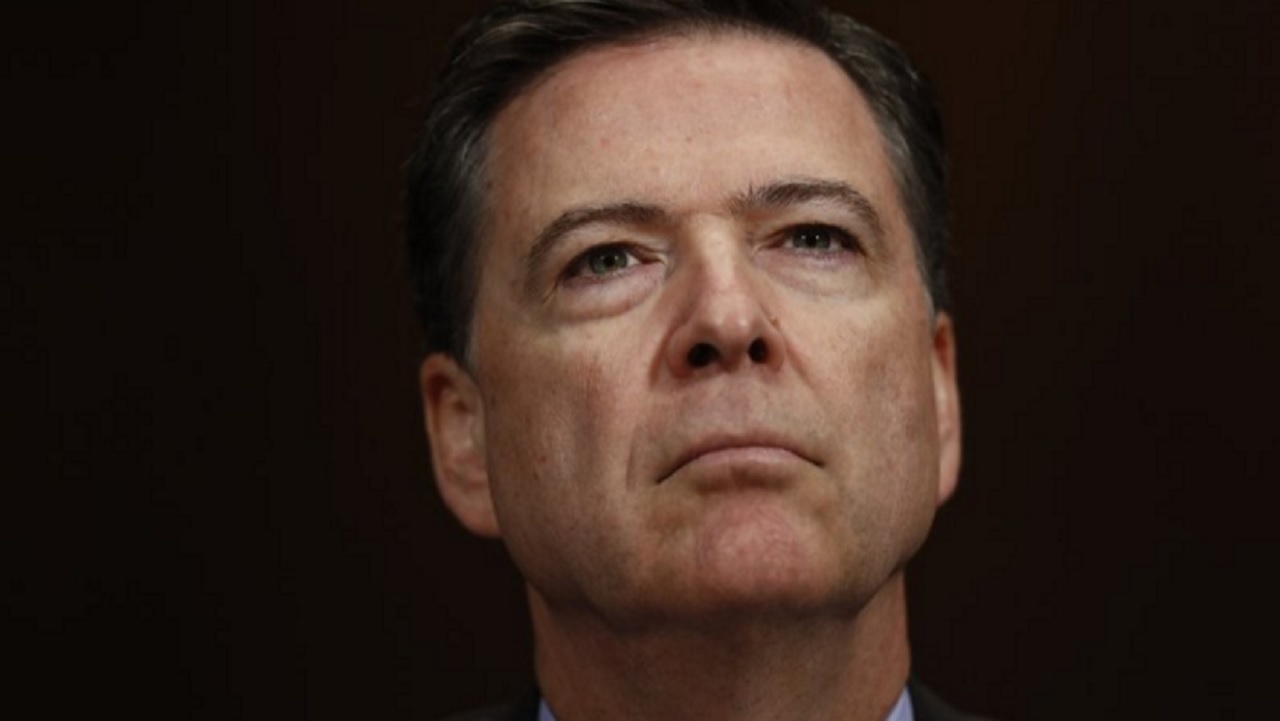 In this May 3, 2017, file photo, FBI Director James Comey listens on Capitol Hill in Washington. President Donald Trump has fired Comey. In a statement on Tuesday, May 9, Trump says Comey’s firing “will mark a new beginning” for the FBI.

The Latest on the firing of FBI Director James Comey (all times local):

The Senate Republican leading the investigation into potential ties between Russia and the Trump campaign says he’s “troubled by the timing and reasoning” behind President Donald Trump’s firing of FBI Director James Comey.

Sen. Richard Burr, who chairs the Intelligence committee, said he found Comey to a public servant of the highest order, and his dismissal “further confuses an already difficult investigation” by his panel.

Burr said Comey was the most forthcoming with information of any FBI director that Burr could recall.

The North Carolina senator called Comey’s firing “a loss for the bureau and the nation.”

The head of a professional association of FBI agents says a change in leadership at the law enforcement agency should be handled carefully.

FBI Agents Association President Thomas O’Connor says the change should be made with an eye toward ensuring the agency can “continue to fulfill its responsibility to protect the American public from criminal and national security threats.”

He says agents want a voice in the selection process.

The organization says it appreciated Comey’s service and leadership. O’Connor says the fired FBI director “understood the centrality of the agent to the bureau’s mission” and knew agents risk their lives daily.

O’Connor says Comey ensured the FBI’s investigations were constitutional and that agents “performed their mission with integrity and professionalism.”

The White House official says Keith Schiller delivered the letters from the president and top Justice Department officials. The official spoke on condition of anonymity to describe Schiller’s activities.

Video of Schiller outside FBI headquarters was aired by CNN. Comey was traveling to an event in Los Angeles at the time.

Schiller is a former detective with the New York Police Department who worked for Trump’s security team for nearly two decades before joining the administration.

The Arizona senator said he has long called for a special congressional committee to investigate Russian interference in the election and said Trump’s decision to remove Comey “only confirms the need and the urgency of such a committee.”

McCain said he was disappointed in Trump’s decision, calling Comey a man of honor and integrity who led the FBI well in extraordinary circumstances.

Republican Sen. Bob Corker of Tennessee said Comey’s dismissal “will raise questions” and said “it is essential that ongoing investigations are free of political interference until their completion.”

He said Trump must nominate a well-respected person to replace Comey.

The top Democrat in the Senate says he told Donald Trump “you are making a big mistake” when the president called to inform him that he was firing FBI Director James Comey.

Schumer questioned why the firing occurred on Tuesday and wondered whether investigations into the Trump campaign’s possible ties to Russia were “getting too close to home for the president.”

He called on the deputy attorney general to appoint a special prosecutor.

Said Schumer: “This investigation must be run as far away as possible” from the president.

Sen. Mark Warner said it’s especially so because it comes during an active FBI investigation into possible improper contacts between Trump’s campaign and Russia.

The Virginia Democrat is helping lead a Senate investigation into Russian interference in the 2016 election. He says Comey’s firing comes after he dismissed acting Attorney General Sally Yates and nearly every U.S. attorney.

Warner said Trump’s actions “make it clear to me that a special counsel also must be appointed” to investigate the Trump campaign’s ties to Russia. He said an independent investigation is the only way the American people will be able to trust the results of an investigation.

Rosenstein says the FBI is “unlikely to regain public and congressional trust until it has a director who understands the gravity of the mistakes” and promises not to repeat them. He made the comments in a memo titled “Restoring Public Confidence in the FBI.”

Rosenstein says Comey has refused to admit his errors and “cannot be expected to implement necessary corrective actions.”

Massachusetts Sen. Edward Markey and Pennsylvania Sen. Bob Casey say the dismissal is reminiscent of the Watergate scandal and the national turmoil during that time.

Maryland Rep. Elijah Cummings says Congress needs to have immediate emergency hearings. Cummings says Comey was the one independent person to investigate Trump and his campaign’s possible coordination with Russia.

Deputy Attorney General Rod Rosenstein says FBI Director James Comey’s public announcement that Hillary Clinton should not face criminal charges over her emails was a “textbook example of what federal prosecutors and agents are taught not to do.”

Rosenstein says in a Tuesday memo that Comey was wrong to announce his own conclusions about “the nation’s most sensitive criminal investigation” without approval from Justice Department leaders.

He says federal prosecutors should have made a decision on whether to charge Clinton.

Comey has defended his announcement on reopening of the probe just before Election Day, saying “concealing” it from Congress would have been worse. But Rosenstein says that’s a loaded term and “silence is not concealment.”

He says federal agents have a policy of not speaking publicly.

Clinton’s spokesman during her 2016 presidential bid, Brian Fallon, said Tuesday that “the timing and manner of this firing suggests that it is the product of Donald Trump feeling the heat on the ongoing Russia investigation, and not a well-thought-out response to the inappropriate handling of the Clinton investigation.”

Fallon said the administration is “falsely citing the very thing that propelled him to the presidency as a convenient excuse” for firing someone “conducting an aggressive investigation into his campaign’s connections to the Russian government.”

Two Democratic senators are criticizing President Donald Trump’s decision to fire the FBI director in the middle of an investigation into the president’s associates’ ties with Russia.

Both Wyden and Whitehouse are members of Senate committees that are doing their own investigations into the Trump campaign’s ties with Russia.

Deputy Attorney General Rod Rosenstein says FBI Director James Comey was wrong to announce his conclusion that the investigation into whether Hillary Clinton mishandled classified information should be closed without criminal charges.

Rosenstein says in a memo that Comey usurped the authority of then-Attorney General Loretta Lynch by announcing his findings. Comey was fired Tuesday.

Rosenstein says Comey should have said the FBI had completed its investigation, then presented its findings to prosecutors.

Rosenstein says Comey instead held a news conference “to release derogatory information about the subject of a declined criminal investigation.” Comey had said Clinton should not be charged but criticized her work habits.

Rosenstein says Comey “laid out his version of the facts for the news media as if it were a closing argument, but without trial.”

Grassley said: “The effectiveness of the FBI depends upon the public trust and confidence. Unfortunately, this has clearly been lost.”

In a letter addressed to President Donald Trump and released by the White House, Sessions says the FBI director must be someone who follows “faithfully the rules and principles” of the Justice Department. Sessions also says the individual must be someone who “sets the right example” for law enforcement officials and others in the department.

Session did not go into detail in the one-page letter dated Tuesday in which he recommended to Trump that Comey be removed as FBI director.

Spicer says the search for a new FBI director was beginning immediately.

Democrats are insisting on an independent prosecutor to investigate possible links between the Trump campaign and Russia following FBI Director James Comey’s firing.

Sen. Kamala Harris of California tweets: “I’ve said it before and will again — we must have a special prosecutor to oversee the FBI’s Russia investigation. This cannot wait.”

Rep. Steve Cohen of Tennessee said “our democracy is in danger,” and he pressed Speaker Paul Ryan to appoint a bipartisan commission to investigate the Trump-Russia relationship.

Sen. Dick Durbin, the No. 2 Democrat in the Senate, stood on the Senate floor and said he would await word from the White House on whether the investigation will continue.

Republican Sen. Lindsey Graham of South Carolina and Democratic Sen. Dianne Feinstein of California both said they received calls from Trump. Graham is heading the panel’s probe into Russian interference in the 2016 presidential election and Feinstein is the top Democrat on the committee.

Neither senator criticized the decision. Graham was supportive, saying that “given the recent controversies surrounding the director, I believe a fresh start will serve the FBI and the nation well.”

Feinstein said Trump told her the FBI needed a change, and that the next director “must be strong and independent.”

In a letter to Comey, Trump said the firing was necessary to restore “public trust and confidence” in the FBI. Comey has come under intense scrutiny in recent months for his role in an investigation into Democrat Hillary Clinton’s email practices, including a pair of letters he sent to Congress on the matter in the closing days of last year’s election.

Trump made no mention of Comey’s role in the Clinton investigation. But the president did assert that Comey informed him “on three separate occasions that I am not under investigation.”