The Latest: Sharapova through to US Open round of 16 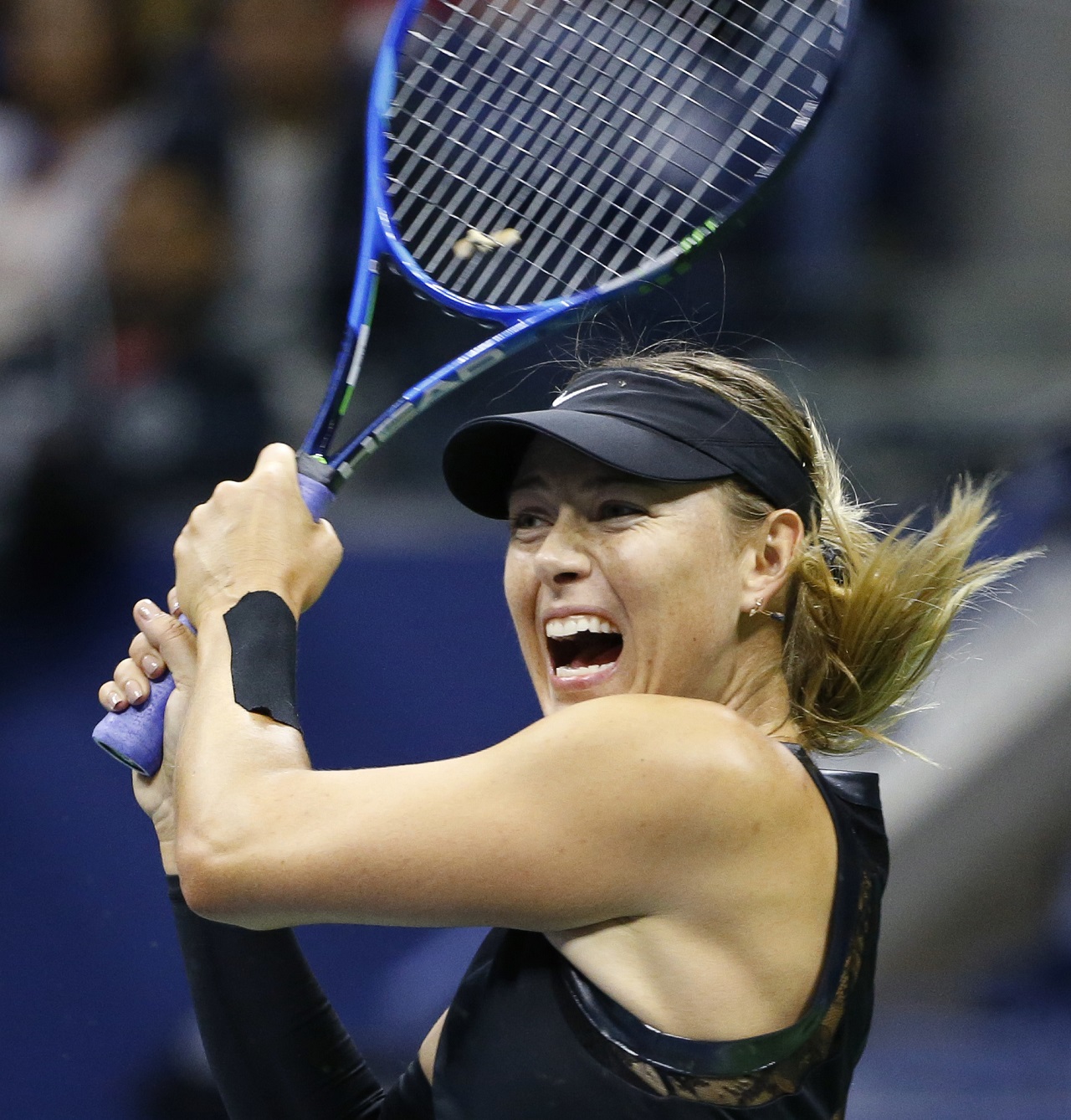 Maria Sharapova, of Russia, follows through on a shot to Sofia Kenin, of the United States, in the first-set tiebreak at the U.S. Open tennis tournament in New York, Friday, Sept. 1, 2017.

Sharapova, who received a wild card to appear in her first Grand Slam event since serving a 15-month doping ban, struggled at times with the counterpunching, moonballing Kenin, who committed less than half of the Russian's 33 unforced errors.

Maria Sharapova fought off a tough challenge to take the first set from American Sofia Kenin 7-5 in their third-round match.

Both the 18-year-old Kenin and the 30-year-old Sharapova received wild cards into the U.S. Open.

John Isner, the highest-ranked American man, is out of the U.S. Open.

Zverev never lost his serve, and broke the hard-serving Isner three times. Zverev also took advantage of 41 unforced errors by Isner, compared to just seven of his own.

Zverev, who reached the Australian open quarterfinals in January, has a chance to match that feat at Flushing Meadows if he can beat his next opponent and the last American man left, Sam Querrey.

Patrick McEnroe said during ESPN's broadcast of the U.S. Open on Friday that Federer got in some practice time earlier in the day at the John McEnroe Tennis Academy on the city's Randall's Island. 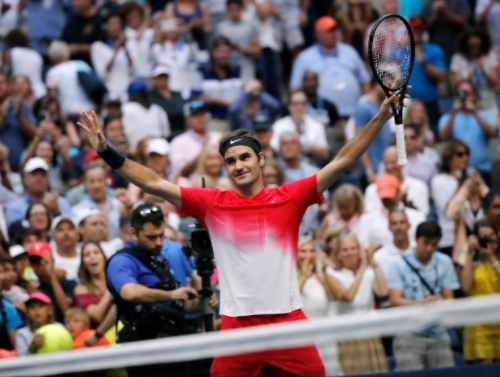 Roger Federer, of Switzerland reacts after defeating Mikhail Youzhny, of Russia,  during the second round of the U.S. Open tennis tournament, Thursday, Aug. 31, 2017 in New York.

John McEnroe added that Federer focused on practicing serving at his opponent's body. He said on the air: "We were happy to serve."

Wednesday, Federer practiced in Central Park on a hard court built similarly to those at Flushing Meadows. The 19-time major tournament champion, who stays in Manhattan during the U.S. Open, told reporters he chose the park court because it didn't involve a long car ride. Said Federer: "We tried it out. It was perfect."

American Sam Querrey is through to the round of 16 at the U.S. Open, equaling his best performance at Flushing Meadows.

Querrey, who reached the Wimbledon semifinals this year, has previously gone as far as the fourth round at the U.S. Open in 2008 and 2010.

Querrey has the chance to face another American, 10th-seeded John Isner, who was just getting underway in his match against 23rd-seeded Mischa Zverev of Germany.

Venus Williams' coach, David Witt, and four other top tennis coaches are being honored by the U.S. Olympic Committee for their contributions to the sport.

Witt coached Williams, a five-time Olympic medalist, to the silver medal in mixed doubles with Rajeev Ram at the 2016 Rio Games. That year also included a run to the semifinals at Wimbledon, followed by finals appearances in both the Australian and Wimbledon this year. Williams moved into the fourth round of the U.S. Open on Friday. 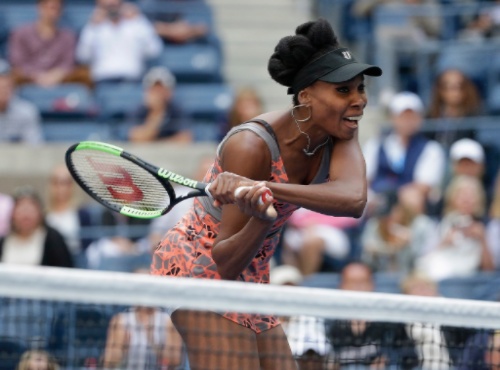 Venus Williams, of the United States, returns  a shot from Maria Sakkari of Greece, of Greece, during the third round of the U.S. Open tennis tournament, Friday, Sept. 1, 2017 in New York.

— Mike Gennette, who has coached at California Lutheran University for 25 years, producing 11 All-Americans over his career.

— Dan James, who has been head coach for the Paralympic tennis team for 17 years, leading David Wagner and Nick Taylor to medal finishes at the 2016 Rio Paralympics.

The U.S. Tennis Association says a man from Estonia has been arrested during the U.S. Open for violating a no-trespassing notice he was given last year during the tournament for "courtsiding" — providing information about a match that can be used by gamblers.

USTA spokesman Chris Widmaier tells The Associated Press that the man was removed from Arthur Ashe Stadium during a match Friday and taken away by police.

Widmaier says eight courtsiders have been identified by the Tennis Integrity Unit's on-site enforcement team so far during the tournament, which began Monday.

He says there were 20 identified through the full two weeks at last year's U.S. Open.

The USTA issues them warnings in the form of 20-year no-trespassing notices.

Venus Williams is into the fourth round of another major after beating Maria Sakkari of Greece 6-3, 6-4.

The No. 9 seed reached the second week for the seventh straight major, the longest active streak in women's tennis. It's the first time since 2010 that she reached the fourth round in every major.

However, Williams was eliminated earlier Friday from a chance at the No. 1 ranking when Garbine Muguruza reached the round of 16.

Third-seeded Garbine Muguruza needed a little over an hour to move into the U.S. Open fourth round.

Muguruza, this year's Wimbledon champion, defeated 31st-seeded Magdalena Rybarikova of Slovakia 6-1, 6-1. The Spaniard has yet to lose a set at Flushing Meadows this year and has dropped only nine games.

Next up for Muguruza is two-time Wimbledon champion Petra Kvitova, the No. 13 seed, who beat 18th-seeded Caroline Garcia 6-0, 6-4.

Canadian teenager Denis Shapovalov is the youngest man to reach the U.S. Open's fourth round since Michael Chang was 17 in 1989.

The 18-year-old Shapovalov advanced to the round of 16 at a major tournament for the first time when Kyle Edmund of Britain stopped playing because of a neck injury.

Sloane Stephens is into the U.S. Open's fourth round, something she last did in 2013.

The 24-year-old American won for the 11th time in her past 13 matches as she continues her comeback from foot surgery, beating Ashleigh Barty of Australia 6-2, 6-4.

Stephens went 11 months without entering a tournament because of an injured left foot. She returned to the tour at Wimbledon in July.

Before reaching consecutive semifinals at hard-court tournaments in Toronto and Cincinnati in August, Stephens was ranked 934th.

She came to Flushing Meadows at No. 83rd and will keep rising.

Not too long ago, Stephens appeared to be a rising star in tennis, making at least the fourth round at six consecutive Grand Slam tournaments, including a semifinal run at the 2013 Australian Open.

Now she is into the second week at a major for the first time since the 2015 French Open.

Cilic won the 2014 title at Flushing Meadows. His loss means there will be a first-time Grand Slam finalist this year from the bottom half of the draw. Only one man left on that side of the bracket has even made it as far as the semifinals at a Grand Slam tournament.

Schwartzman is into the fourth round at a major for the first time.

The only past Grand Slam champion in the lower half of the U.S. Open's men's draw is in trouble.

They are on the side of the bracket that originally had three-time major champion Andy Murray, but he withdrew two days before the tournament started because of a hip injury.

Pablo Carreno Busta reached the fourth round at the U.S. Open for the first time by easily eliminating qualifier Nicolas Mahut 6-3, 6-4, 6-3.

Carreno Busta compiled an impressive disparity of 32 winners to only 13 unforced errors Friday.

The 12th-seeded Spaniard has only once been as far as the quarterfinals at a Grand Slam tournament, at the French Open in June.

Mahut, ranked 115th, is best known for losing the longest match in tennis history, 70-68 in the fifth set against John Isner at Wimbledon in 2010.

Two-time Wimbledon champion Petra Kvitova moved into the U.S. Open's fourth round with a 6-0, 6-4 victory over 18th-seeded Caroline Garcia of France.

It was only the 19th match of the year for Kvitova, who missed the first half of the season after she was cut on her left hand — the one she holds her racket with — during an attack by a knife-wielding intruder at her home in the Czech Republic in December. Garcia, in contrast, has played 52 matches in 2017.

The 13th-seeded Kvitova is in the fourth round at Flushing Meadows for the third time in a row. She lost at that stage to eventual champion Angelique Kerber a year ago.

Kvitova never faced a break point Friday and raced through the first set in 26 minutes. Garcia finally grabbed a game to begin the second set, which was more competitive until Kvitova broke for a 4-3 edge.

Five women still remain in contention for the No. 1 ranking as the U.S. Open's third round begins.

Venus Williams and Garbine Muguruza are among them and try to reach the fourth round by winning Friday.

Two of the others, current No. 1 Karolina Pliskova and Elina Svitolina, will play Saturday.

The fifth, Simona Halep, lost in the first round to Maria Sharapova.