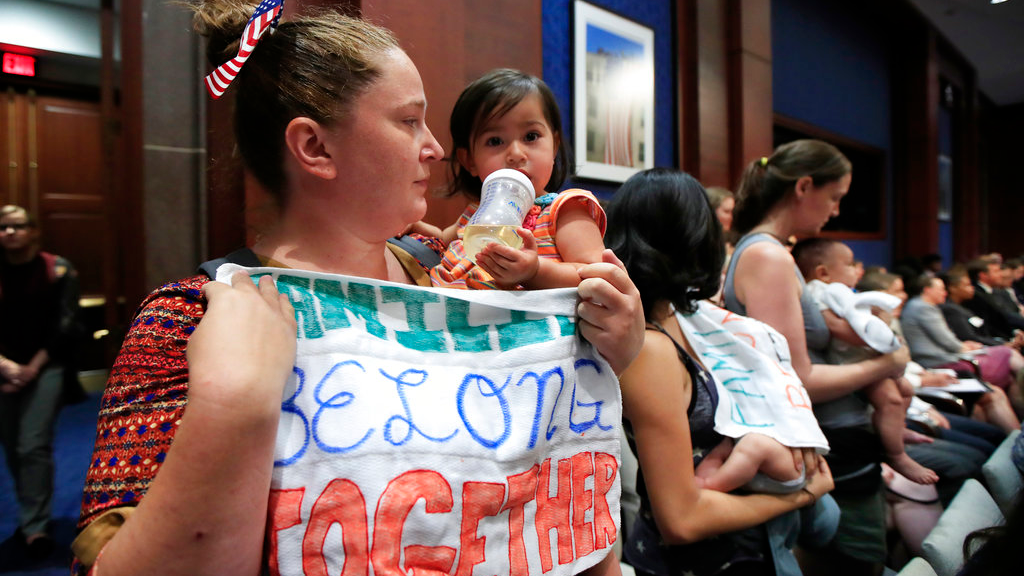 Lucy Martin and her daughter Branwen Espinal together with other mothers and their babies, attend a House Committee on the Judiciary and House Committee on Oversight and Government Reform hearing, to express their support and sympathy to immigrants and their families and objection to the forced separation of migrant children from their parents, on Capitol Hill in Washington, Tuesday, June 19, 2018. (AP Photo/Manuel Balce Ceneta)

The Latest on immigration legislation (all times local):

Pope Francis is criticizing the Trump administration's immigration policy, telling a news reporter earlier this week that he agrees with U.S. Catholic bishops that separating children from their parents at a border is "immoral."

Continuing his criticism Wednesday, he tweeted: "A person's dignity does not depend on them being a citizen, a migrant, or a refugee. Saving the life of someone fleeing war and poverty is an act of humanity."

Trump's attorney general, Jeff Sessions, has quoted the Bible in defending the policy, which calls for every person who crosses the border illegally to be prosecuted and detained. The result has been more than 2,000 children detained without a guardian and no clear plan on how the families will be reunited.

Pope Francis told Reuters in a wide-ranging interview Sunday that he agrees with recent statements by U.S. Catholic bishops who called the separation of children from their parents "contrary to our Catholic values." He said "it's not easy, but populism is not the solution."

About a dozen protesters heckled Homeland Security Secretary Kirstjen Nielsen about the Trump administration's immigration policy as she ate dinner at a Mexican restaurant in Washington.

Nielsen paid her bill and left after about 10 or 15 minutes.

A department spokesman tweeted that during a work dinner, the secretary and her staff heard from a small group of protesters who "share her concern with our current immigration laws."

House Republican leaders searching for a way to tamp down the controversy over family separations at the U.S.-Mexico border are getting little clear direction from President Donald Trump.

Trump visited the Capitol on Tuesday to discuss immigration, and told House Republicans he is behind their rival immigration bills "1,000 percent." Whether Trump's support can push any immigration measure through the divided GOP majority remains a question.

Republican lawmakers are increasingly fearful of a voter backlash in November. They met with Trump with hopes of finding a solution that holds to his hard-line immigration policy and ends the practice of taking migrant children from parents charged with entering the country illegally.

As Trump left the session, a half-dozen House Democrats confronted him and yelled, "Stop separating our families!"