The Latest: At least 22 injured in London subway blast 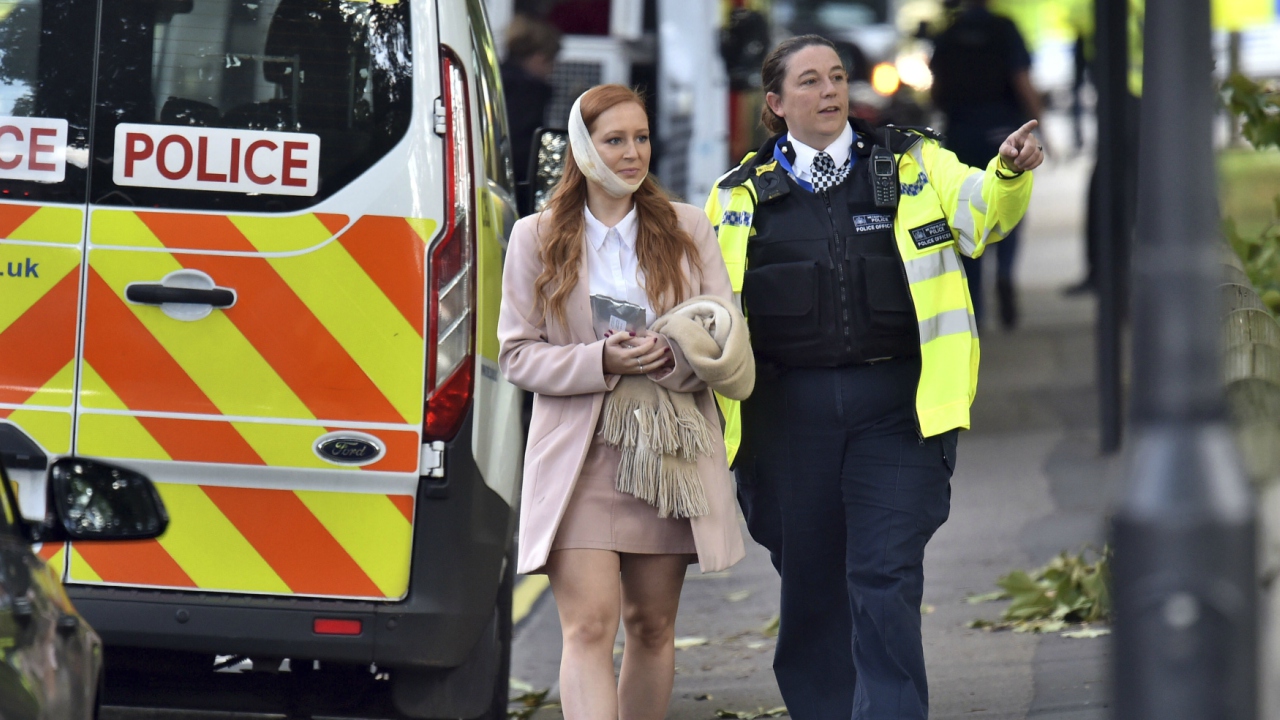 An injured woman is assisted by a police officer close to Parsons Green station in west London after an explosion on a packed London Underground train, Friday, Sept. 15, 2017. (AP Photo)

LONDON — The Latest on an incident at a subway station in London (all times local):

Health officials say the number of people injured in the London subway bombing has risen to 22.

Eighteen were taken to hospitals by ambulance, and four more presented themselves at hospitals.

None of the injuries is thought to be serious or life-threatening.

The National Health Service says the patients are being treated at four London hospitals and clinics.

Police say the blast at Parsons Green station was caused by an improvised explosive device.

U.S. President Donald Trump is calling a fire at a London subway station another attack "by a loser terrorist" and suggesting police there may have missed an opportunity to prevent it.  He also is suggesting that the government cut off internet access to extremist groups.

Trump tweeted Friday: "Another attack in London by a loser terrorist. These are sick and demented people who were in the sights of Scotland Yard. Must be proactive!"

He later added: "Loser terrorists must be dealt with in a much tougher manner. The internet is their main recruitment tool which we must cut off & use better!"

The London Ambulance Service says 18 people have been taken to hospitals with injuries, not thought to be life-threatening

Police say the fire on a London subway train was caused by the detonation of an improvised explosive device.

Police say it was a terrorist incident and is being handled by the Metropolitan Police's counter-terrorism unit.

Police said there were 18 people injured, with most suffering flash burns.

There will be an increased police presence on London as the incident is investigated.

Police did not provide details on any suspects.

The London Ambulance Service says 18 people have been taken to hospitals after a fire at a subway station that police are calling a terrorist attack.

The ambulance service says none of the injuries is thought to be serious or life-threatening.

Passengers reported seeing people with burns to their faces and bodies after the fire on a Tube train at Parsons Green station.

The ambulance service says it was called at 8:30 a.m. Friday and the first crews were on the scene within five minutes.

The mayor of London says the city "will never be intimidated or defeated by terrorism."

Sadiq Khan says the city "utterly condemns the hideous individuals who attempt to use terror to harm us and destroy our way of life."

He says Londoners should remain "calm and vigilant" after a fire on a subway train that police are calling a terrorism incident.

London has been targeted by attackers several times this year, with vehicle attacks near Parliament, on London Bridge and near a mosque in Finsbury Park in north London.

Khan says he will be attending a meeting of the government's COBRA emergency committee with Prime Minister Theresa May later.

Chris Wildish, who was on London subway train where a fire occurred that is being treated as terrorism, said he saw "a massive flash of flames" that reached up to the ceiling of the train and then the air was filled with the smell of chemicals. Wildish told Sky News that many of the passengers were schoolchildren, who were knocked around by people trying to get away from the fire.

Wildish said he saw several burned passengers and later, during evacuation of the station, caught sight of a bucket still in flames.

Footage filmed from the platform through the train door as people were evacuated shows flames licking from the bucket, which is inside a plastic shopping bag. "That bag's on fire," a woman exclaims, before a London Underground staff member orders commuters to get away from the carriage to the end of the platform.

British Prime Minister Theresa May will chair a meeting of the government's emergency committee in response to a subway fire that police have called a terrorist incident.

May tweeted Friday: "My thoughts are with those injured at Parsons Green and emergency services who are responding bravely to this terrorist incident."

Police say several people have been injured in the rush-hour incident on a Tube train at Parsons Green station in west London.

Britain's official threat level from terrorism stands at "severe," the second-highest rung on a five-point scale, meaning an attack is highly likely.

London's Metropolitan Police says a fire on the London subway has been declared a "terrorist incident."

The force says counterterrorism officers are leading the investigation into the incident at Parsons Green station, where "a number" of people have been injured.

Passengers reported an explosion in a carriage of the train shortly after 8 a.m., during the morning rush hour.

Police say it's "too early to confirm the cause of the fire, which will be subject to the investigation that is now underway by the Met's Counter Terrorism Command."

British Foreign Secretary Boris Johnson says people should "keep calm and go about their normal lives" as emergency services respond to an incident at a London subway station.

Johnson says it would be "wrong to speculate," and that police and transit authorities "are on it."

The police, ambulance and fire services say they are responding to an "incident" at Parson's Green station in southwest London. Passengers reported people fleeing in panic after reports of an explosion.

London firefighters are leading passengers off a train along elevated subway tracks near where a reported explosion sent commuters fleeing in panic. Video from the scene showed people picking their way along the tracks.

The evacuation comes after police responded to "an incident" at the Parsons Green station during Friday rush hour.

Photos taken inside the District Line train show a white plastic bucket inside a supermarket shopping bag. Flames and what appear to be wires can be seen. Witnesses said commuters fled the station in a panic. London ambulance services said they had sent multiple crews to the scene, and police advised people to avoid the area.

A commuter whose train had just left the Parsons Green station in southwest London says there was panic after a woman on the platform saw what appeared to be an explosion. Richard Aylmer-Hall said he saw several people injured, apparently trampled as they fled.

"There was a woman on the platform who said she had seen a bag, a flash and a bang, so obviously something had gone off," he said. "Some people got pushed over and trampled on, I saw two women being treated by ambulance crews." He said he did not believe anyone was hurt by the actual device.

The London ambulance service said multiple crews had been dispatched.

Police confirmed the incident Friday morning. Few details were released as emergency services rushed to the scene. The station was closed.

The incident happened during rush hour when the Underground system is crowded. Passengers were advised to use alternate routes.

London Fire Brigade said they were called to the scene at 8:21 a.m. Friday. The London Ambulance Service said it was working with police on the scene.

London's Metropolitan Police and ambulance services are confirming they are at the scene of "an incident" at the Parsons Green subway station in the southwest of the capital. The underground operator said services have been cut along the line.

All three sent out information via Twitter, saying they would update as soon as possible.