Latest front in Weinstein scandal: Statehouses say 'me too' 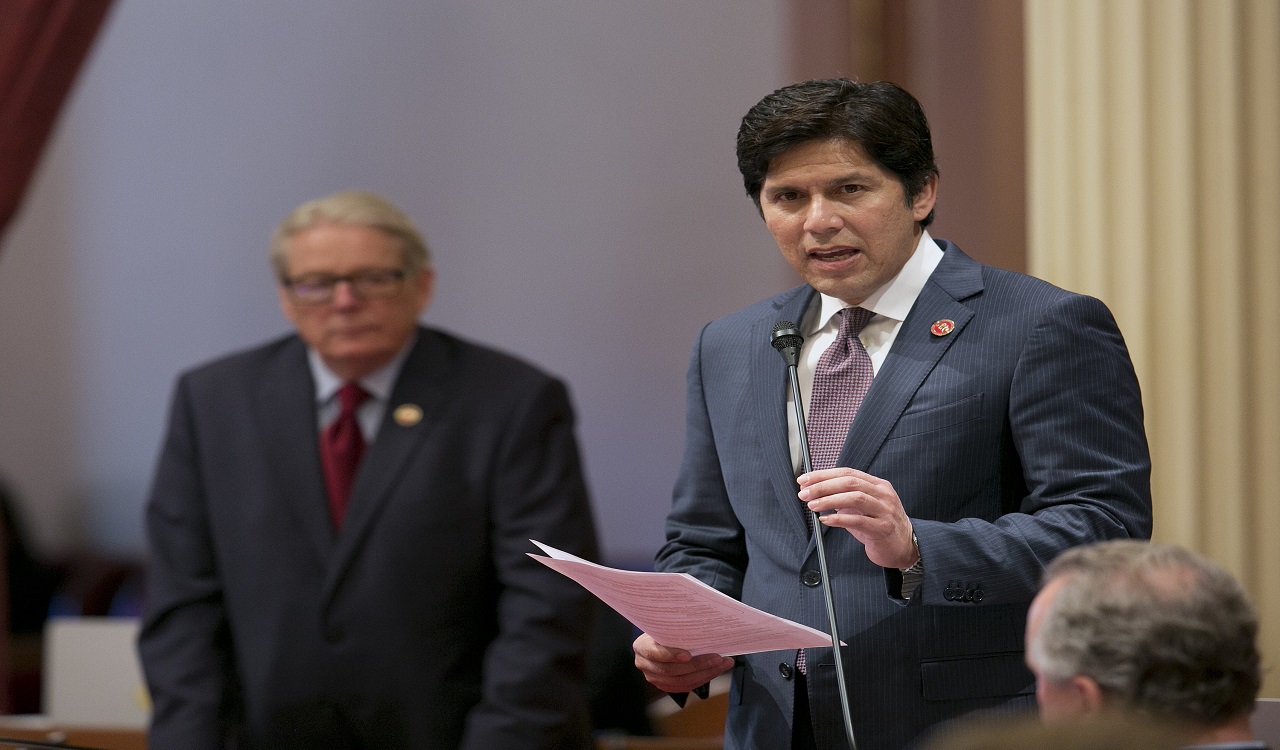 In this Sept. 15, 2017, file photo, state Senate President Pro Tem Kevin de Leon, D-Los Angeles, right, speaks at the Capitol in Sacramento, Calif. In the wake of allegations of sexual harassment at the state Capitol, de Leon announced, Monday, Oct. 23, 2017, the Senate will hire two outside firms to investigate allegations of sexual assault and harassment and to review its policies for responding.

The response to sexual harassment allegations against Hollywood producer Harvey Weinstein has spread to statehouses nationwide, with hundreds of lawmakers, lobbyists and consultants coming forward to say the problem is pervasive in the halls of political power.

Illinois became the latest to join the chorus, as signatures piled up Tuesday on an open letter noting harassment and intimidation for women trying to negotiate legislation and work on campaigns.

In California this week, the Senate hired a law firm to investigate after women described a culture of sexual intimidation. Lawmakers in Oregon and Rhode Island have spoken up to accuse male colleagues of inappropriate touching or suggesting that sexual favors be a condition for advancing bills.

"Every industry has its own version of the casting couch," read the letter circulating in Illinois, which by Tuesday had more than 130 signatures. "Ask any woman who has lobbied the halls of the Capitol, staffed Council Chambers, or slogged through brutal hours on the campaign trail. Misogyny is alive and well in this industry."

While political sex scandals aren't new, the Weinstein allegations and ensuing #MeToo social media movement have put an intense spotlight on the issue in politics. More women are coming forward with stories, some are naming names and states are making fresh promises of investigations and of legislation.

Most states have formal written policies for legislative employees on sexual harassment, according to a July report from the National Conference of State Legislatures. But the rules are less clear for others who work at state capitols, including lobbyists and consultants. Also, the culture of statehouses may be fueling the problem.

Illinois political fundraiser Katelynd Duncan, who helped craft the Illinois letter — signed "The Women Who Make Illinois Run" and accompanied by a private Facebook group — said she was fired from a political campaign in her 20s for reporting inappropriate behavior.

"Very early on in my career, I was taught if I speak up, there'll be negative repercussions," she said. "I had to modify my behaviors to continue doing my job."

In California, a similar letter circulated last week with signers that included lawmakers, lobbyists, political consultants and legislative staff members. The list has turned into an organized campaign called "We Said Enough." The group wants to launch a nonprofit and hold forums. In response, the Senate hired an outside law firm on Monday to investigate the claims.

"I did not know it was as serious or as a big a problem as it was since I saw the letter," said Sen. Connie Leyva, a leader of the Legislative Women's Caucus. "Enough is enough. I can't believe it's 2017 and this is still happening."

A female state senator in Oregon accused a male colleague of inappropriate touching, and his committee assignments were removed as a punishment. In Rhode Island, Democratic Rep. Teresa Tanzi alleged she was told by a more senior lawmaker that sexual favors would allow her bills to go further.

Her revelation prompted an outcry, and state police and the attorney general's office announced they'd launch an inquiry.

"The best outcome for me right now is to look ahead and move forward and to continue to make it so that the next generation of children don't have to endure the same issues that we're facing today," Tanzi said.

Some states pledged to boost training.

State Rep. Sara Feigenholtz, an Illinois Democrat, filed a resolution Tuesday "to change the culture that breeds such behavior." Another proposal was in the works to require legislators, lobbyists and staff to undergo sexual harassment training. Top leaders said they also would require policies for lobbyists.

But some were skeptical of the new efforts.

In California, some raised questions about a firm hired by Senate leadership and are calling for an investigator not chosen by lawmakers, as well as the creation of third-party channels for women and men to bring forward harassment complaints. Complaints brought forward now are handled through Senate and Assembly committees, and many women said they don't report inappropriate behavior for fear it won't be taken seriously or their jobs will be in jeopardy.

Others called for more women in politics, with advocates saying the dearth of women officeholders has consequences.

Though women are more than half of the American population, they account for just a fifth of all U.S. representatives and senators, and one in four state lawmakers, according to data collected by the Center for Women in Politics at Rutgers University.

In Tennessee, Clarksville Mayor Kim McMillan, who was the first female House majority leader in state history, said it took 10 years for her to pass legislation that would make the penalty for spousal rape equal with that of non-spousal rape. Some of her male colleagues didn't believe it was a crime.

She said more women at all levels of government would make it clear that certain behaviors, like sexual harassment, are unacceptable.

"You need people at the table who can explain to them what the effect of their words are," she said. "If there are no women to explain why that is sexist or why they can't say that, I don't know if you can ever get people to understand that their words really do matter and their actions really do matter."