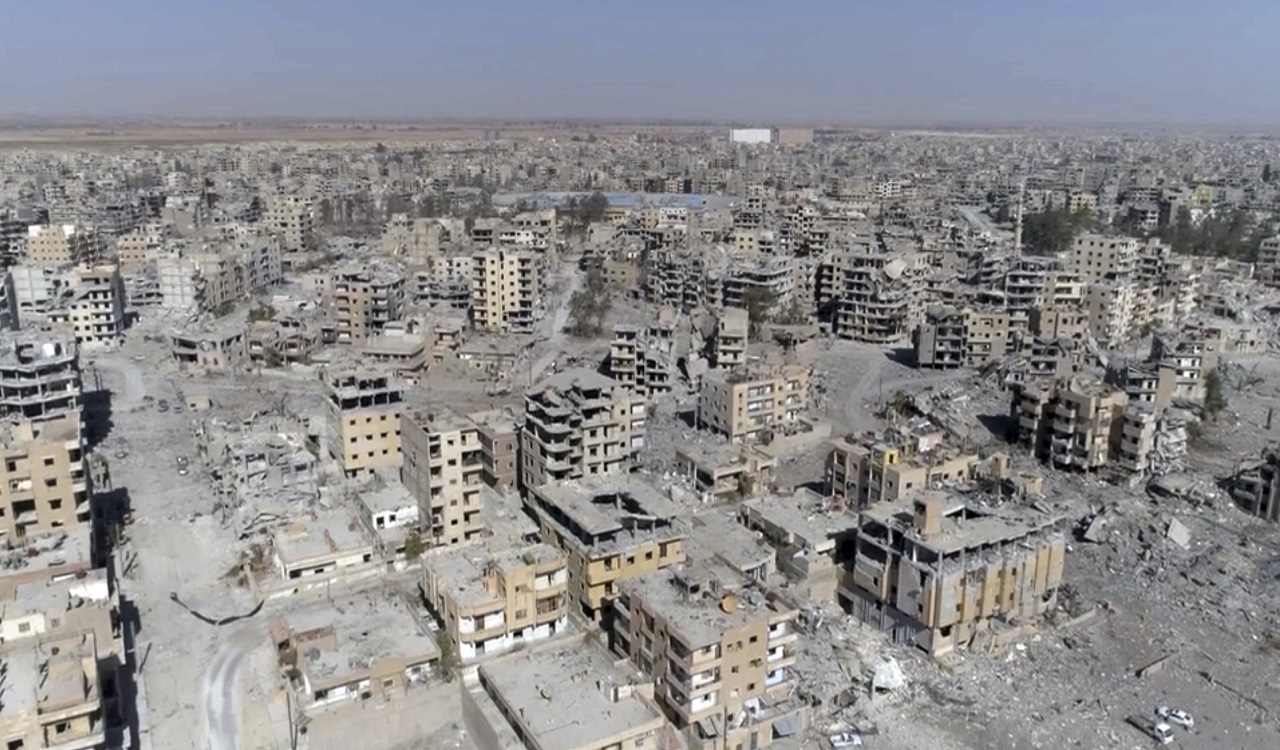 This Thursday, Oct. 19, 2017 frame grab made from drone video shows damaged buildings in Raqqa, Syria two days after Syrian Democratic Forces said that military operations to oust the Islamic State group have ended and that their fighters have taken full control of the city.

The Latest on developments in Syria (all times local):

U.S. Secretary of State Rex Tillerson has congratulated the Syrian people and the U.S.-backed, Kurdish-led Syrian Democratic Forces on the liberation of the city of Raqqa from the Islamic State group.

In a statement released on Friday, Tillerson says the United States is proud to lead the 73-member global coalition in the fight against IS.

He says the coalition efforts has seen Islamic State's "so-called caliphate crumble across Iraq and Syria" but cautions that "our work is far from over."

Tillerson says the "liberation of Raqqa is a critical milestone in the global fight ... to defeat these terrorists."

He says the fall of the city that was IS' de facto capital also "marks the beginning of a new phase in the Syrian conflict" in which the United States and its partners will seek to "de-escalate violence across Syria."

He says: "We are confident that we will prevail and defeat this brutal terrorist organization."

The U.S.-led coalition says the Islamic State group's loss of the Mosul and Raqqa are "turning points" for the extremist group, but adds a "tough fight" still lies ahead to eradicate IS remnants in Iraq and Syria.

In a statement released Friday, it congratulated its Syrian partners, the Kurdish-led Syrian Democratic Forces, for conducting "a highly effective, professional operation in a difficult urban area."

The statement said the liberated city of Raqqa will not return to local governance and leadership.

"Raqqawis now have a chance to control their own future," it said.

The SDF on Friday declared victory over IS in Raqqa and formally handed over administration of the city to a U.S.-backed council made up of of local officials and tribal leaders.

Turkey's president has criticized Western nations, mainly the United States, over their support for Syrian Kurdish fighters in the wake of the liberation of the Syrian city of Raqqa from the Islamic State group.

U.S.-backed and Kurdish-led force known as the Syrian Democratic Forces seized Raqqa this week, forcing the militants from what was once their de facto capital. The liberation of Raqqa was officially proclaimed on Friday.

Amid the celebrations, the Syrian Kurdish fighters have hung up posters of Abdullah Ocalan_the leader of the outlawed Kurdistan Workers' Party, or PKK, imprisoned in Turkey.

Turkey is fighting a Kurdish insurgency within its borders and considers PKK a terrorist group.

Turkish President Recep Tayyip Erdogan denounced the display during a speech in Istanbul.

Erdogan said: "They (Syrian Kurds) hung a poster of the terrorist in Raqqa. How is America going to explain this?"

The Turkish leader also accused the U.S. and European Union nations of publicly calling the "PKK a terror organization" but allegedly protecting the group.

Iran's army chief of staff and other senior officers from the Iranian military have visited a front line in the northern province of Aleppo saying that the extremists' presence in Syria is coming to an end.

Iran has been one of Syrian President Bashar Assad's strongest supporters since the country's crisis began more than six years ago and has sent thousands of Iranian-backed militiamen to boost his troops against opponents.

Syrian government forces and Iran-backed groups have scored major victories against the Islamic State group in eastern Syrian recently capturing last week the IS stronghold of Mayadeen. Syrian troops and allied fighters are now marching toward the town of Boukamal on the border with Iraq.

The government-controlled Syrian Central Military Media on Friday quoted Maj. Gen. Mohammad Bagheri as expressing happiness "to witnesses the success of the axis of resistance." He was referring to a coalition of Iran, Syria, Iraq and Iran-backed groups in the region.

SCMM released two photographs showing Bagheri and other officers in a desert area.

A U.S.-backed Syrian force has declared victory over the Islamic State group in its former "capital" of Raqqa, declaring the city free of any extremist presence.

At a press conference held inside the city Friday, the Kurdish-led force known as the Syrian Democratic Forces formally handed over administration of the city in northern Syria to a council made up of local officials and tribal leaders.

"Our victory is one against terrorism," said Talal Sillo, a spokesman and senior SDF commander.

The press conference was held inside the city's sports stadium which Islamic State militants had turned into a huge prison where they incarcerated and tortured their opponents.

The U.S. State Department issued a travel warning on Wednesday, saying that the tactics of the extremists in Syria include the use of chemical weapons among other things.

The Russian Defense Ministry said in a statement on Friday that the travel warning proves Moscow's point that the extremists, not the Syrian government, are to blame for a deadly chemical weapons attack in a town in Syria's east.

The Organization for the Prohibition of Chemical Weapons earlier this month said it had found traces of sarin following an attack in northern Syria in March, days before a deadly strike using the same nerve agent in Khan Sheikhoun. The government has denied responsibility for that attack.

A U.S.-backed Syrian force is expected to declare victory in the northern city of Raqqa days after it said it cleared it from members of the Islamic State group.

The Kurdish-led Syrian Democratic Forces is scheduled to hold a news conference at noon Friday during which the city will be declared free of extremists.

The SDF is also expected to hand over authority in the city to a local council and a 3,000-member police force made up mostly of residents of Raqqa province.

The fall of Raqqa marks a major defeat for IS, which has seen its territories steadily shrink since last year. IS took over Raqqa, located on the Euphrates River, in January 2014, and transformed it into the epicenter of its brutal rule.