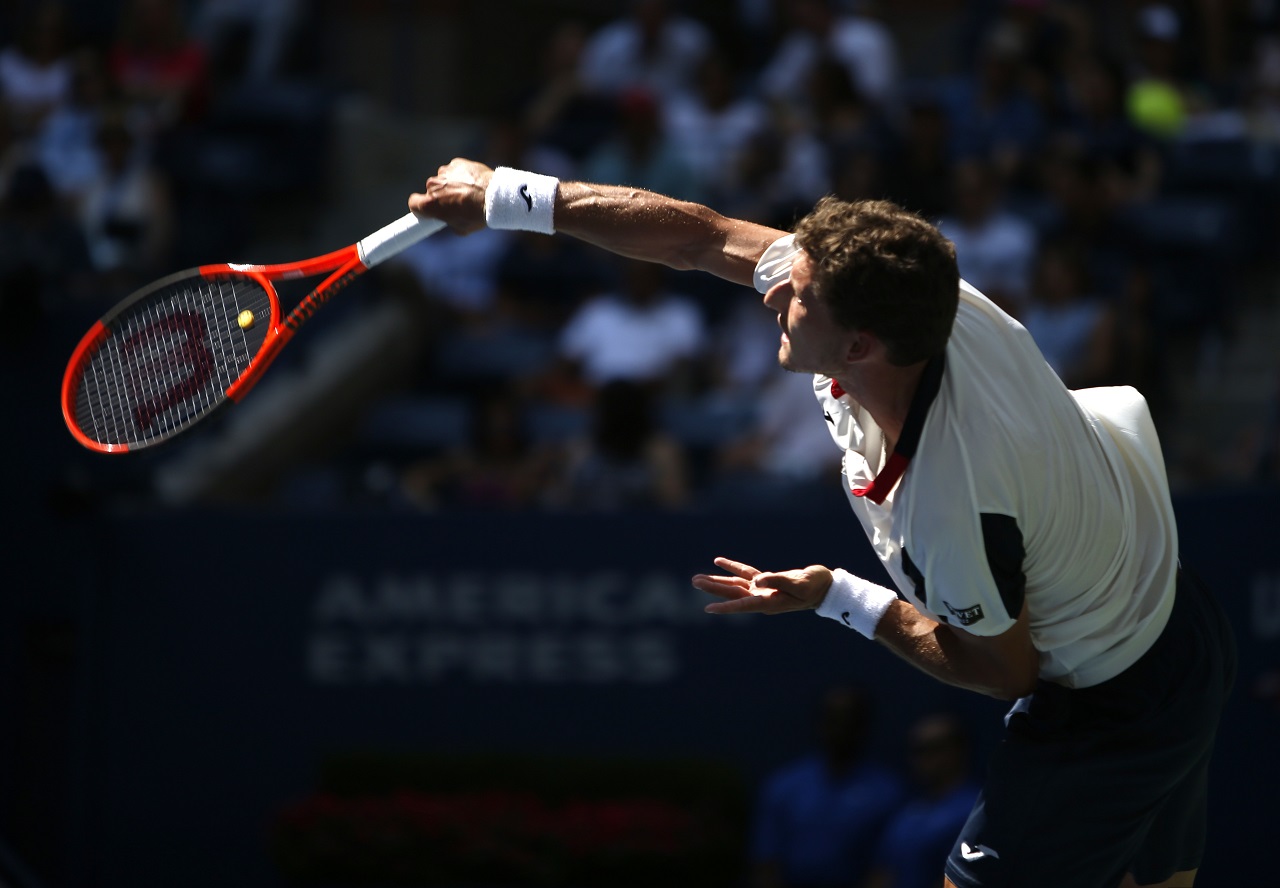 Pablo Carreno Busta, of Spain, serves to Diego Schwartzman, of Argentina, during the quarterfinals of the U.S. Open tennis tournament, Tuesday, Sept. 5, 2017, in New York.

Pablo Carreno Busta is into the semifinals of a Grand Slam tournament for the first time.

Carreno Busta easily handled his first seeded player at this U.S. Open and still hasn't dropped a set in the tournament. He will face No. 17 Sam Querrey or No. 28 Kevin Anderson in the semifinals.

Pablo Carreno Busta is a set away from his first major semifinal.

Carreno Busta still hasn't dropped a set in the tournament.

The Spaniard also reached the quarterfinals of the French Open but had to retire in his match against eventual champion Rafael Nadal because of an abdominal fracture that forced him to miss Wimbledon.

Pablo Carreno Busta is doing just fine so far against his first seeded opponent at the U.S. Open.

The No. 12 seed from Spain leads No. 29 seed Diego Schwartzman of Argentina 6-4 in a men's quarterfinal match.

Carreno Busta became the first player in the Open era to face four qualifiers in a Grand Slam tournament. He didn't drop a set against any of them, reaching the quarters by eliminating Canadian teenager Denis Shapovalov in the fourth round.

Venus Williams is trying to reach the U.S. Open semifinals for the first time since 2010.

Sam Querrey can end a drought that's even longer for American men.

The ninth-seeded Williams meets No. 13 Petra Kvitova on Tuesday night in a quarterfinal matchup of former Grand Slam champions. The 17th-seeded Querrey takes on No. 28 Kevin Anderson of South Africa.

The U.S. hasn't had a men's semifinalist at its home major since Andy Roddick in 2006. The Americans haven't had any men's Grand Slam champion since Roddick won the tournament in 2003.

Another American, Sloane Stephens, faces No. 16 Anastasija Sevastova of Latvia. Ranked 83rd, Stephens is bidding to become the seventh player outside the top 50 to reach the semis since the computer rankings began in 1975.

The other men's quarterfinal pits Pablo Carreno Busta of Spain against Diego Schwartzman of Argentina.