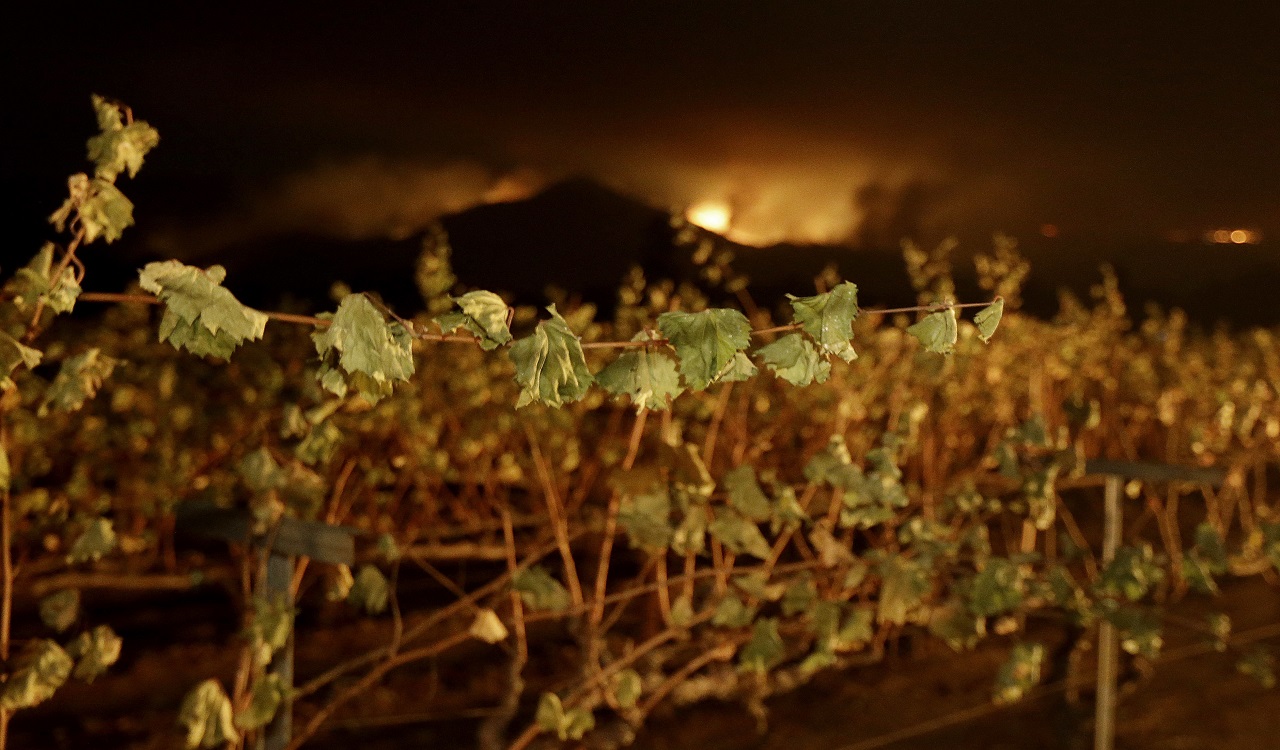 A wildfire from a distant mountain burns over a vineyard in Kenwood, Calif., Tuesday, Oct. 10, 2017.

The Latest on wildfires in California (all times local):

A California fire official says at least 3,500 homes and businesses have been destroyed by wildfires burning in Northern California wine country.

Berlant said Wednesday that 22 wildfires are burning in Northern California, up from 17 on Tuesday.

Officials in Napa County say almost half of the population of Calistoga, a town of 5,000 people, has been ordered to evacuate. New evacuation orders are also in place for Green Valley in Solano County.

The return of cooler weather and moist ocean air is helping an army of firefighters gain ground against a wildfire that has scorched more than a dozen square miles in Southern California.

Orange County Fire Authority Capt. Steve Concialdi says the fire has laid down significantly Wednesday due to the marine layer and the work of more than 1,600 firefighters and a fleet of aircraft.

Concialdi says the blaze is 45 percent surrounded and full containment is expected by Saturday, but commanders are holding onto resources because of forecasts for another round of gusty winds and low humidity levels starting Thursday night.

All evacuations have been lifted except for certain homes in the city of Orange.

The fire erupted Monday about 45 miles southeast of Los Angeles as warm, dry Santa Ana winds swept the region. The cause remains under investigation.

Animals from the Orange County Zoo are among evacuees returning home as crews get a handle on a Southern California wildfire that destroyed 14 buildings and damaged 22 others.

Evacuation orders were lifted Tuesday for thousands of people in Anaheim, Orange and Tustin. And more than 100 animals — including small birds, mammals and reptiles — were returned to the zoo within Irvine Regional Park, where flames roared on Monday.

Zoo officials tell the Orange County Register (http://bit.ly/2gcnFiK) that the remaining animals including bears and mountain lions will be brought back in the coming days.

The newspaper says the zoo had undergone an emergency drill a week before the fire, which helped the evacuation run as smoothly as possible.

The blaze in Sonoma County is one of a series of fires that flared up north of San Francisco on Sunday night and continue to burn with little to no containment. Seventeen people have died in the blazes, 11 of them in Sonoma County.

The fires have also left at least 180 people injured and have destroyed more than 2,000 homes and businesses.

Jose Garnica worked for more than two decades to build up his dream home that was reduced to ashes in a matter of minutes by the deadly firestorm striking Northern California.

Garnica's house was among more than 2,000 homes and business destroyed by the fires that have also killed 17 people.

He moved to the U.S. from Mexico more than 20 years ago, and after saving money from his steady job with a garbage company he fixed up his Santa Rosa house with new flooring and stainless steel appliances.

All of it burned early Monday when the fires broke out. But Garnica says he's still better off than when he came to America.

The fires have scorched large sections of the state's wine country.

Over 100 reported missing in California wildfire