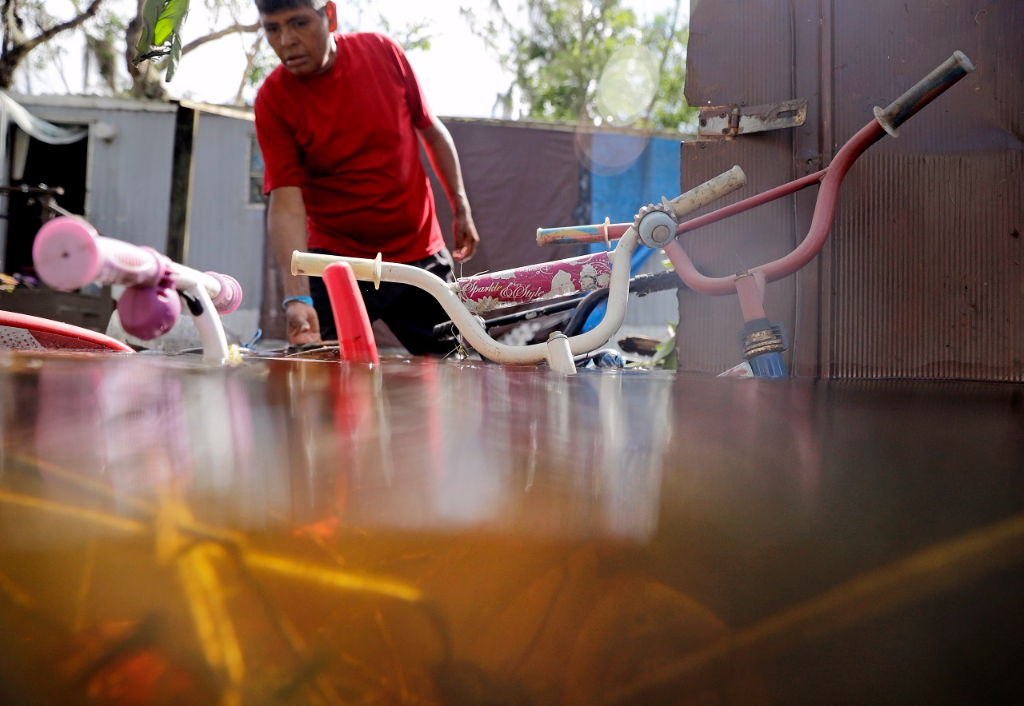 Children's bicycles are flooded outside a home as Ezequiel Cruz retrieves belongings in the aftermath of Hurricane Irma in Bonita Springs, Fla., Tuesday, Sept. 12, 2017.

The Latest on Hurricane Irma (all times local):

City officials say a sixth patient from a Florida nursing home has died in aftermath of Hurricane Irma.

A news release from the city of Hollywood says that three patients were found dead in the facility early Wednesday, while others were taken to the hospital and pronounced dead there. A late morning news release said a total of six have died.

Hollywood Police Chief Tom Sanchez said investigators believe the deaths at the Rehabilitation Center at Hollywood Hills were heat-related. He said the building has been sealed off for the criminal investigation but didn't give further details.

The rest of the center's patients were evacuated. The center has had electricity and air-conditioning problems after Irma.

Several gas stations and a hardware store have reopened in the upper Florida Keys after Hurricane Irma.

But residents still weren't being allowed past Lower Matecumbe Key.

On Conch Key in Coral Key Village, a devastated trailer park remained a debris-filled ghost town. Cars left behind were covered in silt, and seaweed and strewn furniture filled what a week ago were yards. A line of fallen mailboxes still had mail from before Irma inside.

Near Marathon, a sunken boat was visible in the once-again turquoise water.

Authorities have identified a Georgia man killed as Tropical Storm Irma slogged through the state.

The Fulton County Medical Examiner's Office in Atlanta said Wednesday that 59-year-old Stanley Williams died when a tree fell on his home in suburban Sandy Springs. The death was previously announced, but the identity wasn't immediately given.

Williams is among two fatalities in Georgia blamed on Irma, which crossed the state's southwest corner Monday but was large enough to cause damage throughout the state.

A criminal investigation has been launched into the deaths of five patients at a Florida nursing home in Irma's aftermath.

Hollywood Police Chief Tom Sanchez said investigators believe the five deaths at the Rehabilitation Center at Hollywood Hills were heat-related. He said the building has been sealed off for the criminal investigation but didn't give further details.

A total of 115 patients were evacuated from the nursing home, which lost power in the storm and had no air conditioning. Sanchez did not answer questions regarding whether a generator was running inside the place.

Jean Lindor, a kitchen worker, said through a Haitian Creole translator that the air conditioner had not been working since the storm and it had been hot inside.

Paulburn Bogle, a member of the housekeeping staff, said the place had been hot but manageable the past few days. The staff used fans, put cold towels and ice on the patients and gave them cold drinks.

The center still lacks water service, and a post-storm survey has turned up some damage.

About 9,000 people work at Kennedy, most of them contractors.

Several private companies, including Boeing and SpaceX, have operations at Kennedy and reported minimal damage.

Officials in the Florida Keys say it's too early to estimate the financial losses from Hurricane Irma, but they noted that Monroe County and Florida have some of the strongest building codes in the country.

Monroe County Commissioner Heather Carruthers noted that the damage looks bad from the air. But from the ground she noted that "when you clear the trees and all the debris, it's not much damage to the houses.

The county's message appeared push back against more dire damage estimates from federal officials this week.

Carruthers, who lives in Key West, said her house built in 1889 lost shutters but sustained no other damage.

Officials say damage was more severe in the areas around Big Pine Key and Cudjoe Key.

After five nursing home residents died in Hollywood, Florida, a street nearby street was swarmed with police, fire trucks and ambulances.

The streets around the center have been blocked off and a mobile command center has been set up outside.

Hollywood police chief Tom Sanchez said during a news conference that officers and fire crews responded Wednesday morning to a call from the facility about some patients in need of critical care.

He said crews evacuated 115 patients from the center and are in the process of evacuating another 18 patients from a nearby behavioral facility next door.

The 152-bed Rehabilitation Center of Hollywood Hills provides short-term rehabilitative services and long-term care, according to its website

Broward County Mayor Barbara Sharief says five people have died from a Florida nursing home that had lost power after Hurricane Irma roared through the state.

Police and fire crews began evacuating the Rehabilitation Center at Hollywood Hills on Wednesday morning. Sharief confirmed during a news conference that three residents died at the center and two died at the hospital.

Sharief said there are no details about the cause of the deaths. No further details were immediately available.

One of the main highways that connects Florida to the rest of the country is in danger of being closed due to flooding caused by Hurricane Irma.

The Santa Fe River in north central Florida that runs under Interstate 75 has rapidly risen within the past two days, according to Florida transportation officials. Officials say the water will likely rise further in the coming days.

The bridge that crosses the river is just north of Gainesville, the home to the University of Florida. If the highway is closed it would require major detours for those trying to return to the state after evacuating due to Irma.

Tennessee is scheduled to play UF this weekend in Gainesville meaning it could cause problems for those trying to attend the game.

The cleanup effort continues in South Carolina after rain, wind, and flooding prompted by Irma.

Utilities in South Carolina reported more than 63,000 customers were without service Wednesday morning.

Duke Energy had the largest number of outages with nearly 37,000 customers without service. The biggest problems were in Greenville, Anderson and Pickens counties.

The Electric Cooperatives of South Carolina reported nearly 15,000 customers without power. Their biggest problems were in Oconee and Charleston counties.

South Carolina Gov. Henry McMaster on Tuesday lifted an evacuation order that had been in effect on the barrier islands in the southern part of the state.

The Post and Courier of Charleston reported that there was some damage to the fort's docking pier and some interior facilities. But National Park Service officials say no artifacts were damaged.

Dawn Davis with the Fort Sumter National Monument says it will be several days before the fort reopens to the public.

Davis said the Charles Pinckney site in Mount Pleasant and Fort Moultrie on Sullivan's Island will reopen to the public Thursday.

Fort Sumter was the site of the first battle of the Civil War.

One person has died in a Hollywood, Florida, nursing home that has no power.

It wasn't immediately known whether the resident's death was heat related or due to natural causes.

No further details were immediately available.

Hollywood is between Fort Lauderdale and Miami.

The number of power outages continues to drop in Georgia after the remnants of Hurricane Irma stormed through the state, claiming at least two lives.

Less than 600,000 Georgia Power and Electric Member Corp. customers are still without power early Wednesday. The utility companies said they are continuing to assess damage as power is restored.

A man was killed when a tree toppled on his house in Sandy Springs, Georgia. The 67-year-old Nancy Eason died after a tree fell on a vehicle in which she was riding in Forsyth County.

One person has died and three others are being treated at a hospital for carbon monoxide poisoning from an electric generator in Daytona Beach, Florida, the latest such death as people across the state wait for power to be restored after Hurricane Irma.

Officials across Florida are warning people to keep generators outside their homes.

In nearby Orange County, deputies found three people dead and four others were taken to a hospital for treatment of carbon monoxide poisoning Tuesday afternoon. Carbon monoxide from a generator is also suspected in the death of a man in Miami. And authorities say another dozen people were treated for carbon monoxide on Tuesday in Polk and Brevard counties.

More than half of a large retirement community in Pembroke Pines, Florida, remains without power after Hurricane Irma, leaving senior citizens trapped in apartments without access to elevators.

Pembroke Pines police spokeswoman Amanda Conwell tells the Miami Herald that officers have been on the scene because some of the 15,000 residents at Century Village are vulnerable and "we are concerned about their welfare."

Century Village is a senior community, comprised mostly of people over 55 years of age. Pembroke Pines is northwest of Miami in Broward County.

Firefighters had to remove boards from a home that caught on fire in St. Petersburg, Florida, before pulling two adults and two teens to safety.

St. Petersburg Fire Rescue District Chief Steve Girk tells local news outlets that firefighters couldn't tell how big the fire was when they arrived early Wednesday because of the plywood over windows. They pulled off the boards to get inside.

Investigators don't yet know what caused the fire. Authorities didn't identify the family.

The American Red Cross has been asked to help the family. However they're dealing with a high volume of cases since the hurricane.

French President Emmanuel Macron is visiting hurricane-hammered St. Barts after reportedly staying overnight on the nearby island of St. Martin on a camp cot.

Macron is on a visit aimed at offering support and solidarity with struggling islanders after his government had been criticized for not doing enough to prepare and help France's Caribbean territories devastated by Hurricane Irma last week.

Macron's office said he stayed overnight on St. Martin on Tuesday and is going to St. Barts on Wednesday with the French health minister, who has warned about diseases spreading on the islands after water supplies, electricity and communication were knocked out for days. French media reports said Macron was sleeping on a camp cot in the police station.

After spending hours meeting with residents of the French side of the shared French-Dutch island of St. Martin on Tuesday, Macron promised to compensate those who have lost homes and livelihoods and to rebuild the island as a "model" of sustainability and durability with a more diversified economy.

France's president is promising to rebuild stronger Caribbean territories after Hurricane Irma destroyed much of St. Martin and St. Barts.

In a visit to the affected islands, French President Emmanuel Macron acknowledged anger over the government's response to the disaster.

He brought in much-needed food, water and medical supplies Tuesday and said officials were working to evacuate those who wanted to leave and set up much-needed services for those who choose to stay.

He said France was bringing in air-conditioned tents so children can start classes again soon, and he said a center would be established by Monday to begin processing requests for financial help.

Macron pledged to rebuild St. Martin as a "model" for withstanding future storms.

Florida residents are drifting back from shelters and far-away havens to see Hurricane Irma's scattershot destruction.

Flooded streets remained Tuesday, and the count of damaged and totaled homes ticked upward even as some curfews were lifted, flights resumed and amusement park rides again twirled.

Crews were working to repair the lone highway connecting the Keys. Residents of some of the islands closest to Florida's mainland were allowed to return and get their first look at the devastation two days after Irma roared in with 130 mph (209 kph) winds.

9 arrested in Florida for looting sneakers during Irma