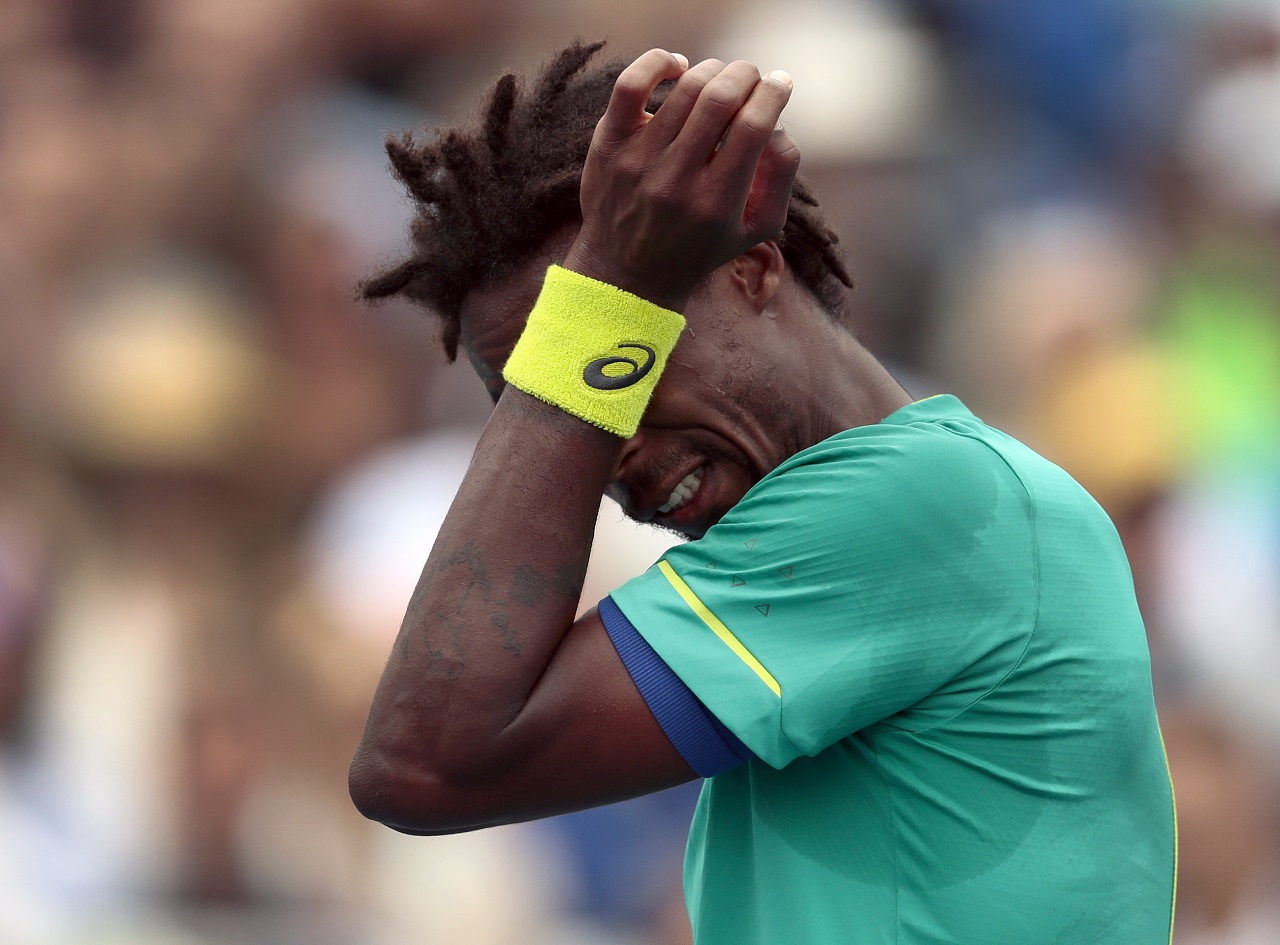 Gael Monfils, of France, wipes sweat from his face during the third round of the U.S. Open tennis tournament against David Goffin, of Belgium, Saturday, Sept. 2, 2017, in New York.

Gael Monfils retired from his third-round match at the U.S. Open, leaving the men's bracket with none of last year's semifinalists at Flushing Meadows.

The 18th-seeded Frenchman stopped playing in the second set while trailing No. 9 seed David Goffin 7-5, 5-1.

Monfils had been dealing with a right knee injury since Wimbledon but when asked why he quit Saturday, initially responded: "The body. Whole body."

Asked for specifics, he mentioned both knees, his arm and his back.

"It was pretty rough," Monfils said.

He was the only one of the 2016 men's semifinalists who entered the tournament this year. Champion Stan Wawrinka, runner-up Novak Djokovic and Kei Nishikori all withdrew before the U.S. Open began because of injuries.

American Shelby Rogers' marathon run at the U.S. Open has ended in the third round.

Rogers, two days after winning the longest women's singles match in U.S. Open history, lost to No. 4-seeded Elina Svitolina 6-4, 7-5. On match point, Svitolina hit a thunderous forehand that hit the net cord and dribbled over for a winner.

Svitolina, one of three players left in the women's draw with a chance to leave Flushing Meadows at No. 1, next faces the winner of the Saturday night match between No. 15 seed Madison Keys and No. 17 Elena Vesnina.

American CoCo Vandeweghe is moving on to the round of 16 at the U.S. Open.

No. 20-seeded Vandeweghe, who reached the semis of the Australian and quarters of Wimbledon this year, outlasted 10th-seeded Agnieszka Radwanska 7-5, 4-6, 5-3 in just under 3 hours.

Vandeweghe faces Czech Lucie Safarova in the fourth round.

The 22-year-old American had never played a main-draw match at any Grand Slam tournament until January at the Australian Open, where she also made it to the fourth round.

Brady, who is from Pennsylvania, is ranked 91st. She will face No. 1 Karolina Pliskova for a quarterfinal berth.

The Argentine won the 2009 U.S. Open when he beat Rafael Nadal in the semifinals and Roger Federer for the title. He also reached the quarterfinals here in 2008, 2012 and 2016.

He next faces No. 6 seed Dominic Thiem.

French Open champion Jelena Ostapenko is out in the third round of the U.S. Open.

Ostapenko, the 12th-seeded Latvian who also made a quarterfinals run at Wimbledon this year, fell to 38th-ranked Daria Kasatkina of Russia 6-3, 6-2. Match point was an epic 29-shot rally that ended when Ostapenko netted a routine backhand.

Kasatkina, who has never before been past the third round of a major tournament, next faces Estonian Kaia Kanepi.

Naomi Osaka's surprising run at the U.S. Open has ended in the third round.

Osaka, the 19-year-old from Japan who stunned defending champion Angelique Kerber in the first round, lost to Estonian qualifier Kaia Kanepi 6-3, 2-6, 7-5.

Kanepi, who made a quarterfinals run at Flushing Meadows in 2010, next faces the winner of the match between French Open champion Jelena Ostapenko and Daria Kasatkina.

Pliskova faced match point at 5-4 in in the second set, but Zhang committed a backhand error and the tall Czech went on to win the game and the second set.

Pliskova, a finalist at Flushing Meadows a year ago, received a trainer massage on her right forearm before returning for the last set. She gutted out that set, coming to the net to swat a cross-court backhand to close out the match.

Pliskova is one of three women still left in the draw — Spaniard Garbine Muguruza and Ukrainian Elina Svitolina are the others — with a chance to end the tournament No. 1. She next faces the winner of the match between American Jennifer Brady and Monica Niculescu.

Alexandr Dolgopolov is into the fourth round of the U.S. Open for the first time in six years.

Dolgopolov was involved in a match recently in Winston-Salem, North Carolina, that's under scrutiny because of unusual betting patterns.

Dolgopolov last reached the fourth round in 2011, when he lost to No. 1 Novak Djokovic. His best result in a Grand Slam tournament is the quarterfinals of the Australian Open earlier that year.

Pliskova was down 6-3 and 5-4 and facing match point when Zhang committed a backhand error. Pliskova went on to win the next two points and the next two games to close out the second set 7-5.

Pliskova received attention from the trainer on her right forearm before beginning play in the third set.

Top women's seed Karolina Pliskova is already down a set in the third round of the U.S. Open.

The Czech dropped the first set 6-3 to 27th-seeded Zhang Shuai of China in the first match of the day on Arthur Ashe Stadium.

Pliskova was the runner-up last year and needs to get back to the final to remain atop the WTA ranking. She would have to win the title if No. 3 seed Garbine Muguruza gets to the semifinals and loses.

The No. 1 seed on the women's side is off to a slow start as play begins at the U.S. Open.

Karolina Pliskova of the Czech Republic trails No. 27 Zhang Shuai of China 5-2 in the first match of the day on Arthur Ashe Stadium.

The runner-up last year, Pliskova needs to get back to the final to remain atop the WTA rankings, and would have to win the title if No. 3 seed Garbine Muguruza gets to the semifinals and loses. Pliskova would have no chance to be No. 1 after the tournament if Muguruza reaches the final.

While upsets have scrambled one half of the U.S. Open men's bracket, everything is mostly as expected on the other side.

Roger Federer and Rafael Nadal will try to keep it that way Saturday.

The two favorites are back in action with third-round matches in Arthur Ashe Stadium.

Women's No. 1 seed Karolina Pliskova and No. 4 Elina Svitolina also try to advance to the fourth round and keep alive their hopes of owning the No. 1 ranking after the year's final major tournament.

Federer faces No. 31 Feliciano Lopez in a night match. The five-time U.S. Open champion has won all 12 meetings but hasn't played his top tennis yet in this tournament. He's played consecutive five-setters to open a major tournament for the first time.

The Latest: Sharapova through to US Open round of 16

Kes the Band under new management to expand global presence