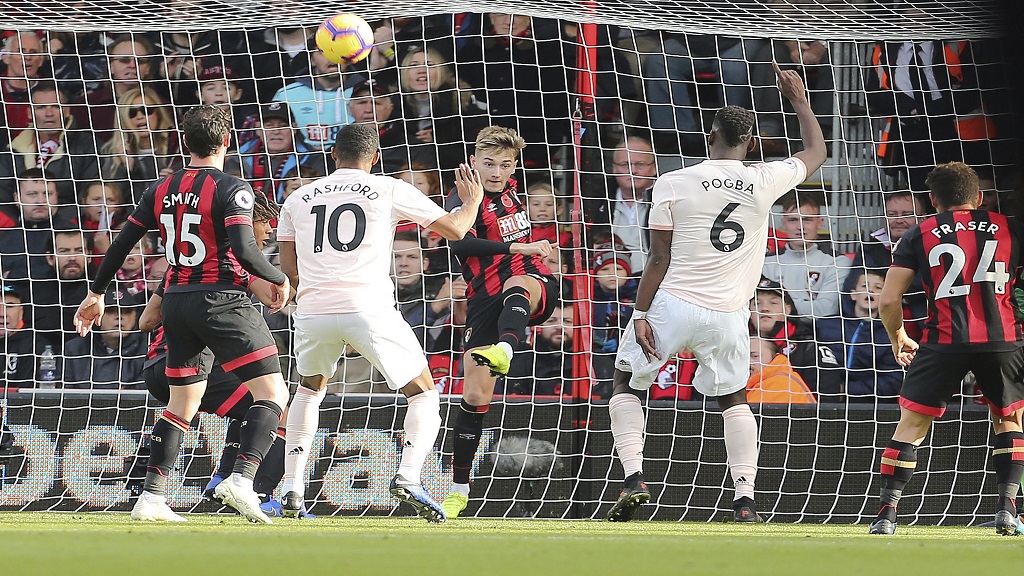 Bournemouth's David Brooks clears a shot from Manchester United's Marcus Rashford off the line during their English Premier League football match at The Vitality Stadium, Bournemouth, England on Saturday Nov. 3, 2018.

Marcus Rashford scored a stoppage-time winner as Manchester United came from behind to triumph 2-1 at Bournemouth in the Premier League.

Rashford had already missed a golden opportunity on the rebound when Ashley Young's free-kick hit the crossbar, but he came up trumps for Jose Mourinho's men at the Vitality Stadium on Saturday.

Paul Pogba's left-wing cross was chested down by the England forward, who kept his composure to fire past Asmir Begovic and earn United their first away league win in three attempts.

Anthony Martial earlier levelled for United, scoring for the fourth Premier League game in a row, as Bournemouth's fine start - Callum Wilson scoring an early opener - counted for nothing.

David de Gea had already made a good save with his legs to deny Ryan Fraser when Wilson's sixth Premier League goal of the season and 50th strike for the club gave Bournemouth a deserved 11th-minute lead.

After a Bournemouth corner was half-cleared, a superb Lewis Cook pass sent Stanislas through in the right channel and his low cross was perfect for Wilson to tuck away past De Gea.

Martial's hot streak continued with the equaliser in the 35th minute, the forward slotting home a pass from Sanchez, who started for United in the absence of injured striker Romelu Lukaku.

Bournemouth started the second half on top and De Gea reacted quickly to save an instinctive flicked finish from the again impressive David Brooks, then Martial's clever play sent Luke Shaw through but the left-back was denied by Begovic.

Young's free-kick struck the woodwork but Rashford should have converted the rebound, instead seeing his effort blocked by Nathan Ake, with Brooks clearing off the line as Pogba tried to turn the ball home.

Rashford made amends with a dramatic 92nd-minute winner, however, collecting a Pogba cross and keeping cool to snatch the points with his first Premier League goal since September.