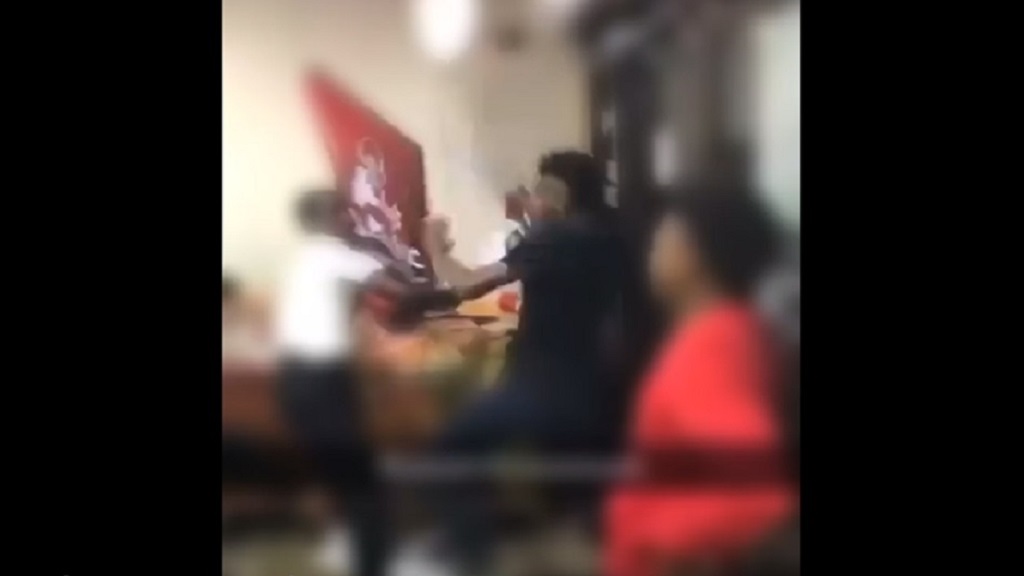 A screen grab from a video recording of a fight between a security guard and a group of youngsters at a fast food outlet in St Andrew late on Friday night.

There was a melee inside of a popular fast food franchise outlet in Barbican Square, St Andrew on Friday night into Saturday morning, during which an irate teenager and a security guard exchanged blows in full view of patrons who had packed the establishment for early morning meals.

Sources reported that tempers flared at the establishment after the security guard refused to let in more customers than could be comfortably accommodated inside the outlet, at any one time. That position reportedly led to the fisticuffs between the guard and a youngster who is said to be related to a well-known businessman.

Both combatants were said to have thrown major blows at each other before associates of the youngster in the direct line of the action, reportedly kicked in a section of the glass at the fast food outlet, and stormed the establishment, with kicks from multiple angles being directed at the badly outnumbered and outmatched security guard.

A video of aspects of the huge fight is below.

"The youths dem step up, step up inna him head, and then everybody run out because the youth dem family ah some chopper that everybody fear,” an eyewitness told Loop News reporter Claude Mills.

The Half-Way Tree police confirmed the incident, but had few details to offer about what is officially believed to have caused the fracas.

Security guard shot by another guard at work site in Falmouth

Teen charged with murder arising from dispute while picking ackees