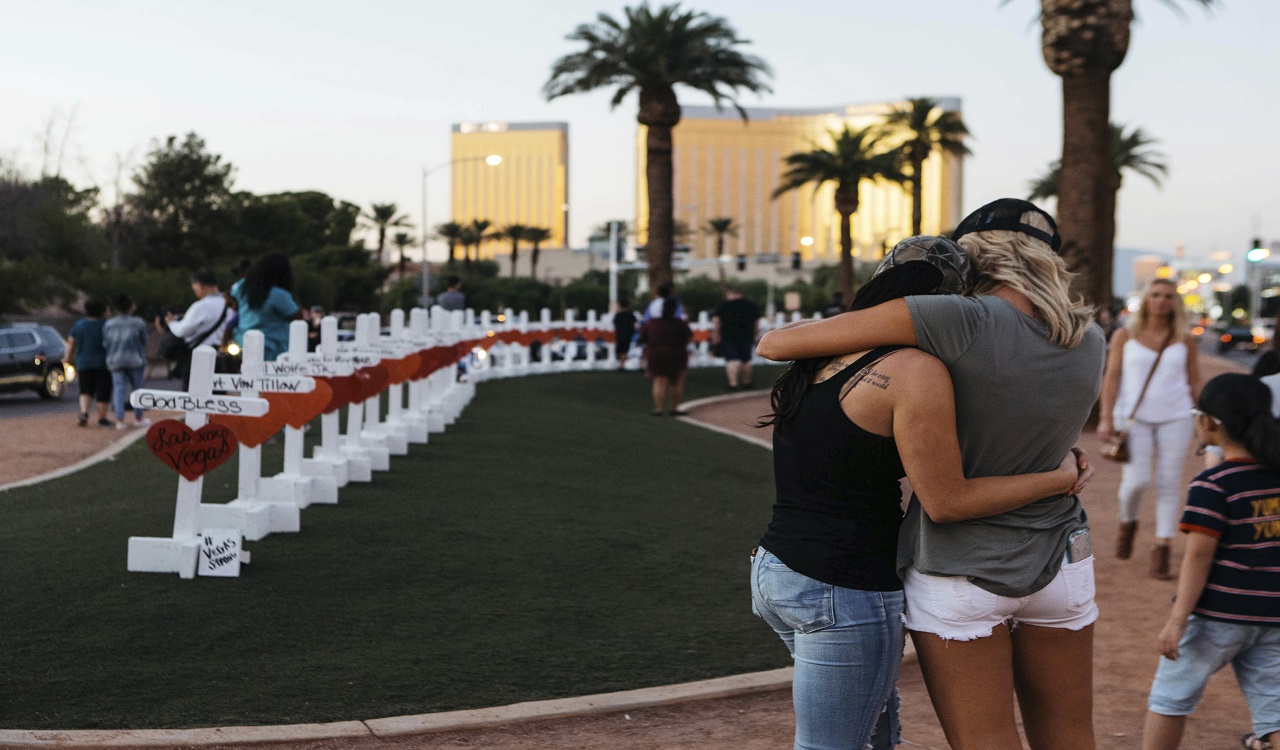 A memorial displaying 58 crosses by Greg Zanis stands at the Welcome To Las Vegas Sign on Thursday, October 5, 2017, in Las Vegas. Each cross has the name of a victim killed during the mass shooting at the Route 91 Harvest country music festival this past Sunday. Dozens of people were killed and hundreds were injured.

It wasn't clear whether Paddock fired any of the illuminated bullets during the high-rise massacre Sunday night, but his purchase of 1,000 rounds provided more evidence of how methodically he planned the attack that killed 58 people and injured nearly 500.

Paddock bought the .308-caliber and .223-caliber tracer ammunition from a private buyer he met at a Phoenix gun show, a law enforcement official not authorized to comment on the investigation said on condition of anonymity.

Tracer rounds illuminate their path so a gunman can home in on targets at night. But they can also give away the shooter's position.

Video shot of the pandemonium that erupted when Paddock started strafing the country music festival showed a muzzle flash from his 32nd-floor room at the Mandalay Bay resort, but bullets weren't visible in the night sky.

Paddock's preparations included requesting an upper-floor room overlooking the festival, stockpiling 23 guns, a dozen of them modified to fire continuously like an automatic weapon, and setting up cameras inside and outside his room to watch for approaching officers.

In a possible sign he was contemplating massacres at other sites, he also booked rooms overlooking the Lollapalooza festival in Chicago in August and the Life Is Beautiful show near the Vegas Strip in late September, according to authorities reconstructing his movements leading up to the deadliest mass shooting in modern U.S. history.

Investigators have yet to figure out what drove him to violence. The 64-year-old high-stakes gambler killed himself as police closed in on his room.

A federal official said authorities are looking into the possibility Paddock planned additional attacks, including a car bombing. The official wasn't authorized to discuss the matter publicly and spoke to The Associated Press on condition of anonymity.

Paddock had 1,600 rounds of ammunition in his car, along with fertilizer that can be used to make explosives and 50 pounds of Tannerite, a substance used in explosive rifle targets.

His girlfriend, Marilou Danley, told FBI agents Wednesday that she had not noticed any changes in his mental state or indications he could become violent, the federal official said.

Paddock sent Danley on a trip to her native Philippines before the attack, and she was unaware of his plans and devastated when she learned of the carnage while overseas, she said in a statement.