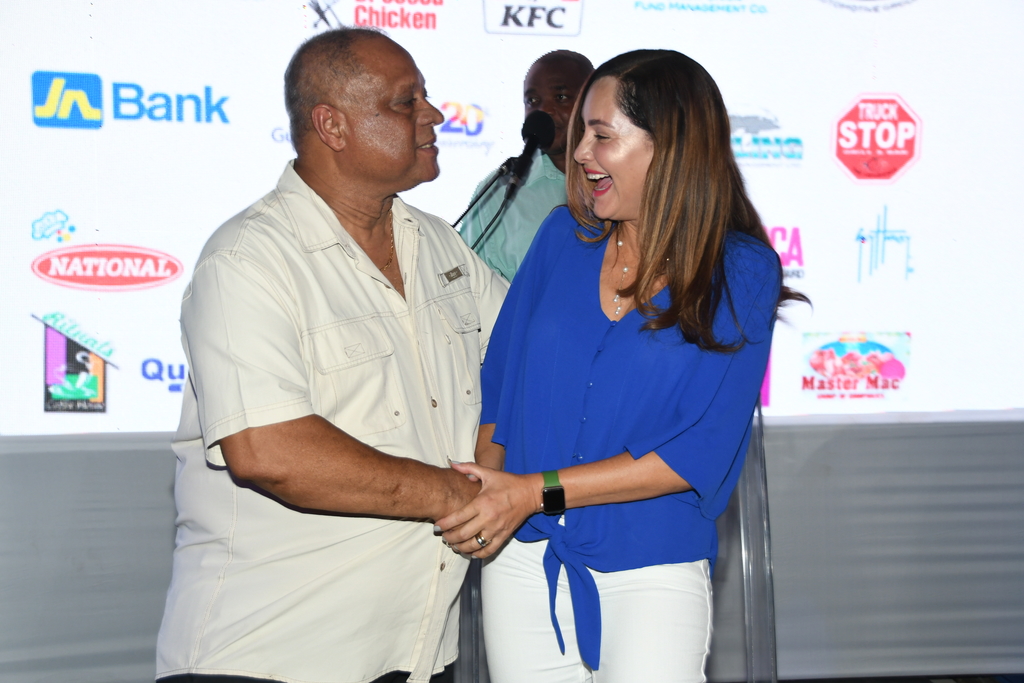 Max Rochester (left), chair of the Sir Henry Morgan Angling Association makes a point to Member of Parliament for East Portland, Ann-Marie Vaz, during the launch of the Port Antonio Marlin Tournament at Truck Stop in Market Place, St Andrew in late August.

A lack of mammography machines in health facilities in Portland has spurred an initiative by Member of Parliament for East Portland, Ann-Marie Vaz, to offer free screenings to women in the parish.

The screenings have been organised through her Action Ann Foundation, which received a boost on the weekend from the Sir Henry Morgan Angling Association, which organised contributions of some $120,000 to assist the Foundation with its cause.

The anglers made the announcement at the closing ceremony of their successful 56th Port Antonio Marlin Tournament at the Ole Marina in Port Antonio, Portland. An additional $80,000 was committed by anglers, David and Kathy Moss to the cause.

“There is no reason in today’s world that a woman should die from breast cancer,” Vaz emphasised.

“Breast cancer is one of the cancers that can be [prevented] by early detection,” she said, pointing out that many women live long and healthy lives after being diagnosed.

Vaz said the lack of machines means women have to travel to Kingston from the rural eastern parish, which is among the poorest in the country, for screening. Through her Foundation’s initiative, the women will be transported to the capital city where they will be treated free of charge.

Generally mammograms cost upwards of $10,000, although her foundation will be paying $4,000 per mammogram.

“It is so fitting because of October,” declared Vaz, as she acknowledged the commitment by the anglers. October is recognised internationally as Breast Cancer Awareness Month.

However, Vaz said, although the lack of machines created a barrier to getting screenings done, a major problem among women is fear.

“One of the issues most MPs in rural areas face is that our women are afraid of the mammograms,” she explained, which leads to unnecessary deaths from breast cancer.

Her statement has been backed up by the Jamaica Cancer Society, whose executive director, Yulit Gordon revealed during a #JNPowerofPink think tank session entitled Beyond Breast Cancer recently that fear was among the reasons women were not being screened.

They fear the examination, the results of the tests, the treatment, and the adverse effects related to the treatment, she advised, despite some 413 deaths from breast cancer in 2018.

Gordon added that the exorbitant costs to treat cancer and the absence of health insurance to alleviate the financial burden also posed major challenges for many persons.

She disclosed that she was also afraid of mammograms, however, with the support of her husband, she took the trip to the doctor after discovering a lump in one of her breasts some time ago. Thankfully, the tumour was benign.

She, therefore, noted that the support of spouses are important in combatting fear among women and encouraged men to support women to get screened.

The announcement of Vaz’s initiative at the closing ceremony was also welcomed by JN Bank, one of the sponsors of the 56th Port Antonio Marlin Tournament, who, through the JN Group, has also mounted its second #JNPowerofPink campaign for October to raise awareness about the importance of early detection; celebrate survival and pay homage to persons who relentlessly fought the disease.

Chief of business banking and Portland native, Ryan Parkes, commended anglers for recognising the cause, given the economic realities in Portland. The parish, although peaceful, is among the poorest in the country with a poverty rate of 21.5 per cent according to the Planning Institute of Jamaica’s Survey of Living Conditions 2012.

“Breast cancer is recognised as the leading cause of cancer deaths among women and it’s affecting women at the most productive stages of their lives based on the data. Therefore, it’s important that tournaments like this play a part in addressing these issues that will eventually feed into the development of the parish,” he said.

The 56th Port Antonio Marlin Tournament enjoyed a successful year, with some 16 boats participating in the tourney. A total of 64 canoes competed in the fishers’ section during the five-day event which closed on October 4. The average number of marlin caught was 1.93 per boat, which tournament director, Maxim Rochester described as outstanding when compared to previous years.

The tournament winners were Keeping it Jiggy led by husband and wife team Sascha Hoffmann and Paulette Thai-Chung Hoffmann. Mrs Thai-Chung Hoffman emerged the top female angler, a title she has now held for about four years.