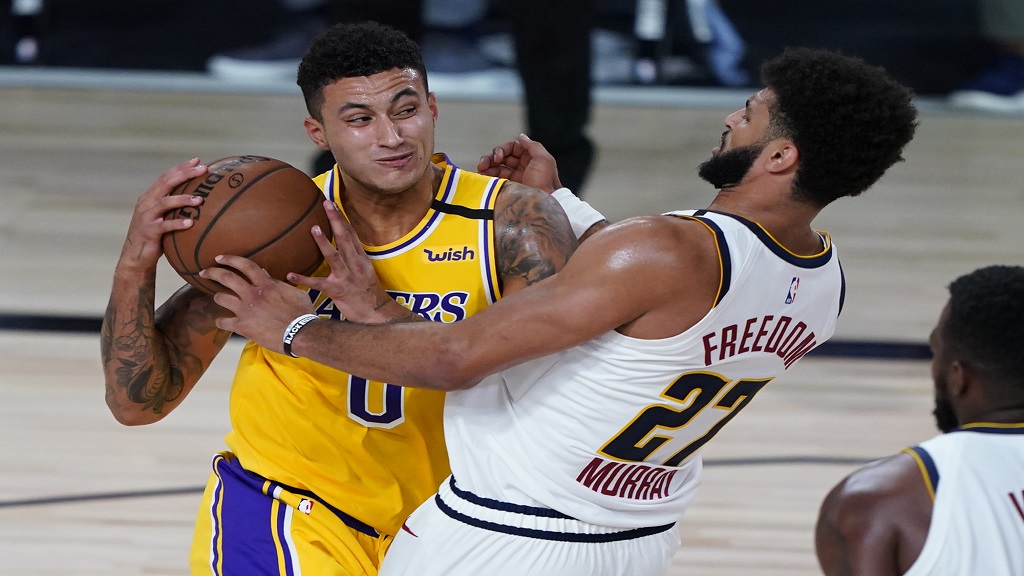 Kyle Kuzma was the hero as the Los Angeles Lakers trumped the Denver Nuggets 124-121 in the NBA on Monday.

Kuzma nailed a three-pointer with 0.4 seconds remaining to see the Lakers past Western Conference rivals the Nuggets at Walt Disney World Resort.

The Lakers forward finished with 25 points in Orlando, while LeBron James put up a double-double of 29 points and 12 assists as Anthony Davis contributed 27 points.

In the absence of reigning MVP Giannis Antetokounmpo, Milwaukee went down 114-106 to defending champions the Toronto Raptors, who were also without Kyle Lowry, Serge Ibaka and Fred VanVleet.

The Bucks became the first team in NBA history to have as many or more losses over their final 13 games as they did the entire season prior to that, per STATS.

The Phoenix Suns improved to 6-0 inside the Orlando bubble since the league's restart after defeating the Oklahoma City Thunder 128-101. Devin Booker led the way again with 35 points, including 14-for-14 fromthe free throw line.

Jimmy Butler (19 points and 11 rebounds) posted a double-double in his return from a foot injury as the Miami Heat closed in on the Eastern Conference fourth seed by topping the Indiana Pacers 114-92.

Utah Jazz forward Royce O'Neale was scoreless in a 122-114 loss at the hands of the Dallas Mavericks. O'Neale was 0 of four from the field, while he missed all three of his attempts from beyond the arc in 14 minutes. Jordan Clarkson (18) was the only Jazz starter to shoot double-digit points.

It was a tough outing for the Thunder, who were held to just 17 points in the third quarter against the Suns. Oklahoma City managed just 37 points in the second half.