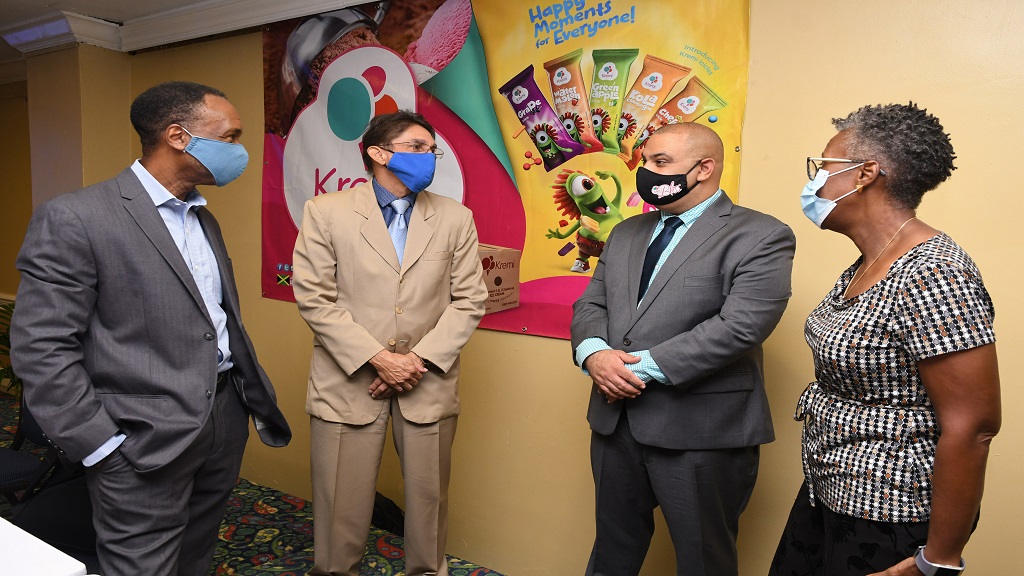 Over the 2019-20 financial year, Kremi continued its strong revenue growth, increasing sales by 10 per cent. This increase is mainly due to increases in volumes derived from the launch of new products.

So said Ryan Peralto, General Manager of Caribbean Cream, manufacturer of the Kremi brand of ice cream and novelties.  He was speaking at the company’s annual general meeting on Tuesday, October 27 held with a limited number of shareholders and staff at the Knutsford Court Hotel.

However, Peralto said, during the period, profits dipped to $54.5 million. This, he noted, was attributed to an overall 12 per cent increase in the prices of raw materials.  He explained that Kremi could not adjust prices fast enough to compensate, nor did market conditions allow the company to pass on the full impact in higher prices to its consumers.

In addition, Peralto noted that the utility costs outpaced revenue because of the ever rising exchange rate, while depreciation increased by $41 million overall, due to the fact that the company installed new equipment. IFRS charges added another $20 million in depreciation which pushed profit down.  Marketing of the new line of novelties introduced during the year also racked up a cost of $7 million.

“Amid it all, the company has in the current financial year proven to be resilient in that during COVID-19 half-year sales grew 6 per cent to $891 million.  This is primarily because of the efficiency of the company’s distribution model which takes the products to the consumer through wholesale depots, household vendors and ‘fudgies” – the bicycle and motor cycle vendors,” said the general manager of Kremi.

According to Peralto, during COVID-19, the demand for Kremi products increased above expectations and thankfully the company was able to sustain supplies of ice cream.

“Here I would like to pay tribute to our hard working staff and management team,” he said

As a result of this sustained growth, Kremi’s profits for the first half of the year increased by $38.7 million or 110 percent compared to last year. Peralto explained that this was achieved because Kremi was able to source raw materials at stable prices.

“Despite higher depreciation costs and charges associated with IFRS 16, operating expenses went down by 2 per cent, with the slashing of the marketing budget because of COVID-19 and the implementation of a shared service agreement with Kremi’s related company, Scoops Unlimited,” he noted.

During the year under review, Kremi established a partnership in Portmore for the opening of a depot to complement its partnerships which cover downtown and parts of St Andrew.  In addition, Kremi controls three wholly-owned depots in Montego Bay and May Pen, while the company added a new depot in Ocho Rios during the year, making a total of five around the island, including two in St Andrew. The company has invested in up-to-date cold storage facilities at each wholly-owned depot.

“We are looking to open more depots as we identify those opportunities,” Peralto said.

He announced that dialogue is taking place between Caribbean Cream and JPS to install a Combined Heat & Power (CHP) plant to save on energy costs.

“Refrigeration is a major energy user for our kind of business in order to maintain a reliable cold chain.  So the installation of an LNG-fuelled CHP plant will both reduce the company’s energy costs – which continue to rise per gallon of output – and our carbon foot print,” the general manager outlined.

Peralto said work was underway to install this system as soon as the company is able to satisfy all regulatory requirements. Also, the cold room which was commissioned in 2014 at its main facility on  South Road, Kingston will  be replaced to meet the demands, as Kremi looks to get into fudge production in Jamaica and to introduce a one gallon tub of Kremi ice cream to the market.

“We are now working to finalise a new cold room design for installation to begin in the 2021/2022 fiscal year," Peralto noted.