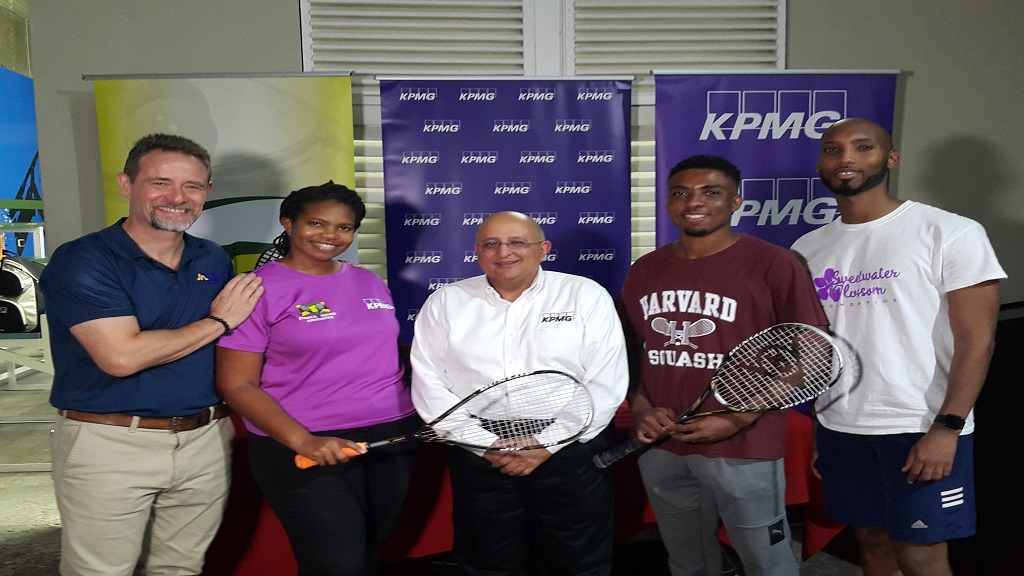 Tarun Handa, (centre) Managing Partner for KPMG in Jamaica poses with players and officials from the Jamaica Squash Association at the recent launch of the 2020 KPMG Squash League at the Liguanea Club in Kingston.

The 21st annual KPMG Squash League serves off on Tuesday with a jam-packed roster as 22 teams do battle for top honours.

The popular handicap tournament will have close to 90 players in action with ages, gender, experience, and skill-levels ranging across the spectrum.  The competition’s unique format will ensure that each player is on level footing with their opponent, which makes for exciting matches and unpredictable outcomes game by game.

Defending champions, the Adams Family is back in the hunt, fielding the same four-man line-up of Robert Roper, Adam Hugh, Adam Lee, and Allan Roper, who got the job done last year.  Similarly, 2019 runners up, the Power Bolts, has kept its roster intact and the team, which includes four junior national squad players; Aman Dhiman, Savannah Thomson, Mia Todd, and Dylan Vaz, is determined to take the title this time around.

Also in the mix are multiple-time champions, the Milex Eagles whose star-studded slate includes former Caribbean junior champions, Larissa and Akelia Wiltshire, former All Jamaica junior champion, Tahjia Lumley as well as Shane Slater, an experienced competitor.  In the same vein, 2018 winners, the Cereal Killers, another all-juniors team, is also hoping to return to the winner’s circle.

“The KPMG League is a tournament that the entire squash community looks forward to because the participation cuts across the board and showcases the range of players who compete in the sport,” Chris Hind, President of the Jamaica Squash Association said.

“We are also pleased that this year we have strong representation from our junior players, and this will sharpen their skills for the national and Caribbean championships that are coming up later this year,” he added.

Tarun Handa, Managing Partner for KPMG in Jamaica said, “KPMG has supported this tournament for over 20 years and we continue to be impressed by the way the competition brings out a wide cross-section of players and spectators making it a true community event, and this year should be no different.”

The first phase of the tournament, which will feature a round-robin format, is expected to run until the end of March.  The top eight teams will advance to the knockout stage, which will be played in the first half of April.